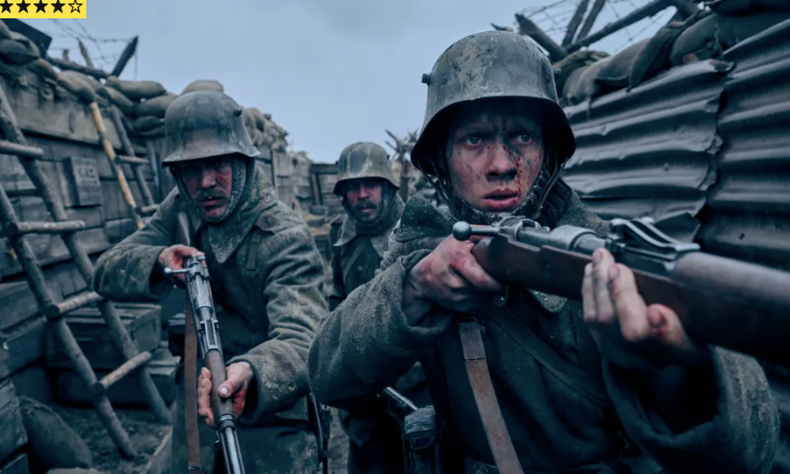 Teenage boys quickly find themselves caught up in the ordeal of trench warfare in this German-language adaptation of the first world war novel. Photograph: Netflix

Erich Maria Remarque’s anti-war classic gets its first German-language adaptation for the screen, after the Hollywood versions of 1930 and 1979; it’s a powerful, eloquent, conscientiously impassioned film from director and co-writer Edward Berger. Newcomer Felix Kammerer plays Paul, the German teenage boy who joins up with his schoolfriends in a naive patriotic fervour towards the end of the first world war, excitedly looking forward to an easy, swaggering march into Paris. Instead, he finds himself in a nightmare of bloodshed and chaos.

For generations of British readers, the story provided the symmetrical complement to similar agony behind the Allied lines, a book read in tandem with, say, Wilfred Owen’s poetry. It was that intertextual, mirror-image combination which in some ways established the dimension of absurdist insanity that later anti-war works such as Catch-22 would build on. The original German title, Im Westen Nichts Neues (“In the West Nothing New”), brilliantly rendered as “all quiet on the western front” in 1929 by Australian translator Arthur Wheen, is a phrase from a factual military report endowed with an awful irony. The western front is only quiet for the dead.

Young Paul is this movie’s Known Soldier, the symbol of innocence ruined, his fresh-faced openness caked in a blood-and-mud mask of horror. He is marooned in the ordeal of static trench warfare, all the more wrenchingly futile as this is taking place towards the end of the war, and cowed German representatives are arriving to sign the capitulation in the French railway carriage at Compiègne. Daniel Brühl plays civilian politician Magnus Erzberger who led the German delegation; Thibault de Montalembert has a cameo as Marshal Foch, contemptuously rejecting any face-saving concessions to the Germans. The story is to reach a climax of nausea after the signing, when an enraged German general declares to his exhausted and traumatised troops that they have time for one last battle to save the fatherland’s honour before 11 o’clock, the hour of the armistice.

Paul’s comrades are Müller (Moritz Klaus), Kropp (Aaron Hilmer), Tjaden (Edin Hasanović) and most importantly the older and more careworn professional soldier Katczinsky, or “Kat” – a tremendous performance from Albrecht Schuch. Kat is to be the boys’ elder brother figure, or perhaps even father figure, or even a figure of their own alternative selves, with more protective disillusion. Paul and Kat’s raid on a French farmhouse for food becomes an uproarious caper; later, they are seated together on the log over the latrine trench (a feature of the first world war that also appears in Peter Jackson’s They Shall Not Grow Old) and illiterate Kat asks Paul to read aloud to him a letter from his wife, which excruciatingly reveals a private family tragedy.

All Quiet on the Western Front is a substantial, serious work, acted with urgency and focus and with battlefield scenes whose digital fabrications are expertly melded into the action. It never fails to do justice to its subject matter, though is perhaps conscious of its own classic status. Perhaps nothing in it quite matches the shudder of the brutal opening sequence of the war machine: a soldier is killed and his uniform is removed from his corpse, washed and mended with all the others and then dished out to raw recruit Paul with the dead man’s name tag accidentally left on the collar, to Paul’s bewilderment. (“Just too small for the fellow – it happens all the time!” explains the quartermaster hurriedly, snapping off the label.) The entire drama is flavoured with this grim premonition of death.

All Quiet on the Western Front is released on 14 October in cinemas, and on 28 October on Netflix.