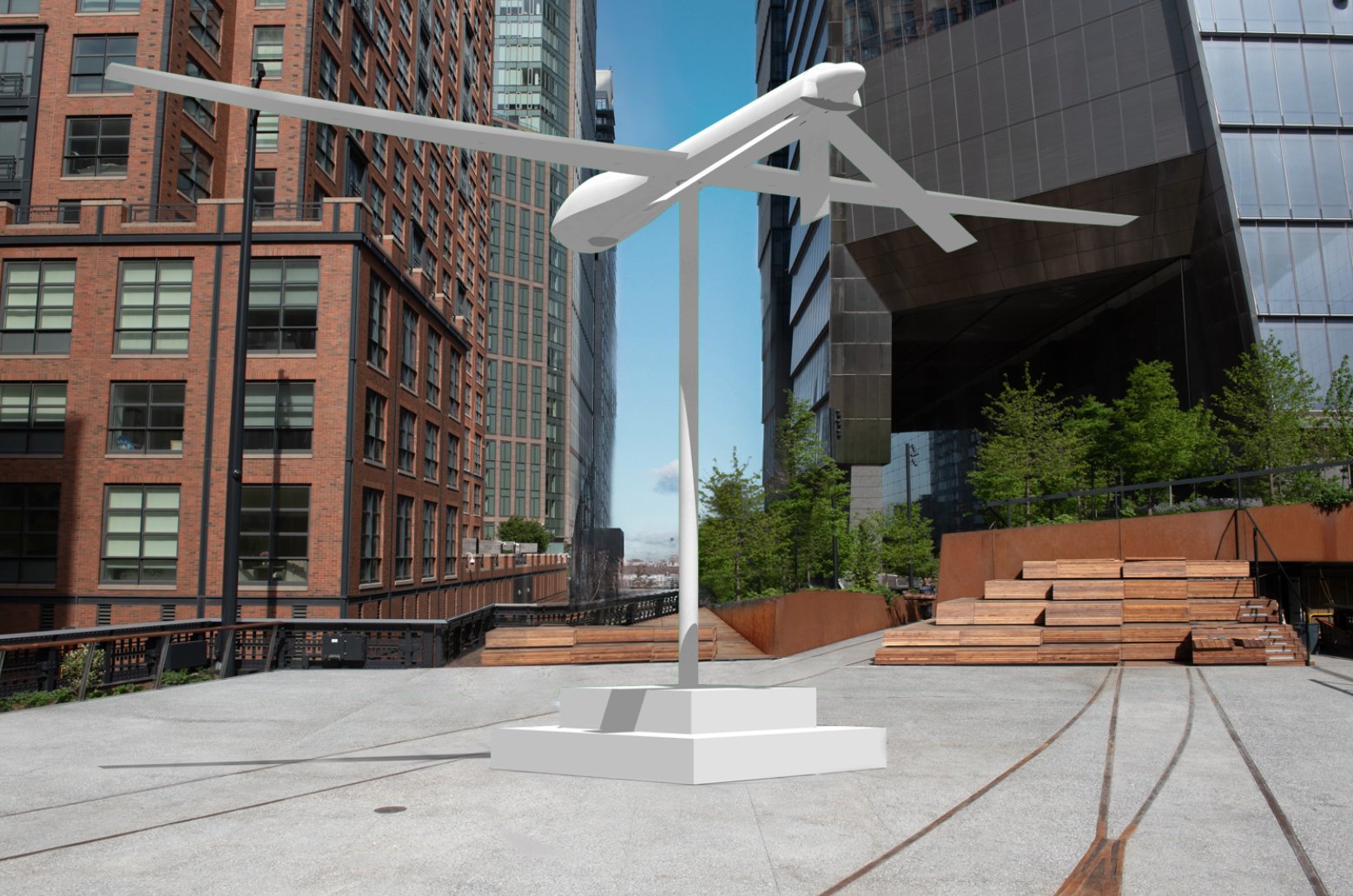 At the High Line, a popular tourist attraction in New York City, visitors to the west side of Lower Manhattan ascend above street level to what was once an elevated freight train line and is now a tranquil and architecturally intriguing promenade. Here walkers enjoy a park-like openness where they can experience urban beauty, art, and the wonder of comradeship.

In late May, a Predator drone replica, appearing suddenly above the High Line promenade at 30th Street, might seem to scrutinize people below. The “gaze” of the sleek, white sculpture by Sam Durant, called “Untitled (drone),” in the shape of the U.S. military’s Predator killer drone, will sweep unpredictably over the people below, rotating atop its twenty-five-foot-high steel pole, its direction guided by the wind.

Unlike the real Predator, it won’t carry two Hellfire missiles and a surveillance camera. The drone’s death-delivering features are omitted from Durant’s sculpture. Nevertheless, he hopes it will generate discussion.

“Untitled (drone)” is meant to animate questions “about the use of drones, surveillance, and targeted killings in places far and near,” said Durant in a statement “and whether as a society we agree with and want to continue these practices.”

Durant regards art as a place for exploring possibilities and alternatives.

In 2007, a similar desire to raise questions about remote killing motivated New York artist Wafaa Bilal, now a professor at NYU’s Tisch Gallery, to lock himself in a cubicle where, for a month, and at any hour of the day, he could be remotely targeted by a paint-ball gun blast. Anyone on the Internet who chose to could shoot at him.

He was shot at more than 60,000 times by people from 128 different countries. Bilal called the project “Domestic Tension.” In a resulting book, Shoot an Iraqi: Art Life and Resistance Under the Gun, Bilal and co-author Kary Lydersen chronicled the remarkable outcome of the “Domestic Tension” project.

Along with descriptions of constant paint-ball attacks against Bilal, they wrote of the Internet participants who instead wrestled with the controls to keep Bilal from being shot. And they described the death of Bilal’s brother, Hajj, who was killed by a U.S. air to ground missile in 2004.

Grappling with the terrible vulnerability to sudden death felt by people all across Iraq, Bilal, who grew up in Iraq, with this exhibit chose to partly experience the pervasive fear of being suddenly, and without warning, attacked remotely. He made himself vulnerable to people who might wish him harm.

Three years later, in June 2010, Bilal developed the “And Counting” art work in which a tattoo artist inked the names of Iraq’s major cities on Bilal’s back. The tattoo artist then used his needle to place “dots of ink, thousands and thousands of them—each representing a casualty of the Iraq war. The dots are tattooed near the city where the person died: red ink for the American soldiers, ultraviolet ink for the Iraqi civilians, invisible unless seen under black light.”

Bilal, Durant, and other artists who help us think about U.S. colonial warfare against the people of Iraq and other nations should surely be thanked. It’s helpful to compare Bilal’s and Durant’s projects.

The pristine, unsullied drone may be an apt metaphor for twenty-first-century U.S. warfare which can be entirely remote. Before driving home to dinner with their own loved ones, soldiers on another side of the world can kill suspected militants miles from any battlefield. The people assassinated by drone attacks may themselves be driving along a road, possibly headed toward their family homes.

U.S. technicians analyze miles of surveillance footage from drone cameras, but such surveillance doesn’t disclose information about the people a drone operator targets.

In fact, as Andrew Cockburn wrote in the London Review of Books, “the laws of physics impose inherent restrictions of picture quality from distant drones that no amount of money can overcome. Unless pictured from low altitude and in clear weather, individuals appear as dots, cars as blurry blobs.”

On the other hand, Bilal’s exploration is deeply personal, connoting the anguish of victims. Bilal took great pains, including the pain of tattooing, to name the people whose dots appear on his back, people who had been killed.

Contemplating “Untitled (drone),” it’s unsettling to recall that no one in the U.S. can name the thirty Afghan laborers killed by a U.S. drone in 2019. A U.S. drone operator fired a missile into an encampment of Afghan migrant workers resting after a day of  harvesting pine nuts in Afghanistan’s Nangarhar province. An additional forty people were injured. To U.S. drone pilots, such victims may appear only as dots.

In many war zones, incredibly brave human rights documentarians risk their lives to record the testimonies of people suffering war-related human rights violations, including drone attacks striking civilians. Mwatana for Human Rights, based in Yemen, researches human rights abuses committed by all the warring parties in Yemen. In their report, “Death Falling from the Sky, Civilian Harm from the United States’ Use of Lethal Force in Yemen,” they examine twelve U.S. aerial attacks in Yemen, ten of them U.S. drone strikes, between 2017 and 2019.

The report says at least thirty-eight Yemeni civilians—nineteen men, thirteen children, and six women—were killed and seven others were injured in the attacks.

From the report, we learn of important roles the slain victims played as family and community members. We read of families bereft of income after the killing of wage earners including beekeepers, fishers, laborers, and drivers. Students described one of the men killed as a beloved teacher. Also among the dead were university students and housewives. Loved ones who mourn the deaths of those killed still fear hearing the hum of a drone.

Now it’s clear that the Houthis in Yemen have been able to use 3-D models to create their own drones which they have fired across a border, hitting targets in Saudi Arabia. This kind of proliferation has been entirely predictable.

The U.S. recently announced it plans to sell the United Arab Emirates fifty F-35 fighter jets, eighteen Reaper drones, and various missiles, bombs and munitions. The United Arab Emirates has used its weapons against its own people and has run ghastly clandestine prisons in Yemen where people are tortured and broken as human beings, a fate awaiting any Yemeni critic of their power.

The installation of a drone overlooking people in Manhattan can bring them into the larger discussion.

Outside of many military bases safely within the United States—from which drones are piloted to deal death over Iraq, Afghanistan, Yemen, Somalia, Syria, and other lands—activists have repeatedly staged artistic events. In 2011, at Hancock Field in Syracuse, thirty-eight activists were arrested for a “die-in” during which they simply lay down, at the gate, covering themselves with bloodied sheets.

The title of Sam Durant’s sculpture, “Untitled (drone),” means that in a sense it is officially nameless, like so many of the victims of the U.S. Predator drones it is designed to resemble.

People in many parts of the world can’t speak up. Comparatively, we don’t face torture or death for protesting. We can tell the stories of the people being killed now by our drones, or watching the skies in terror of them.

We should tell those stories, those realities, to our elected representatives, to faith-based communities, to academics, to media and to our family and friends. And if you know anyone in New York City, tell them to be on the lookout for a Predator drone in lower Manhattan. This pretend drone could help us grapple with reality and accelerate an international push to ban killer drones.

Kathy Kelly has worked for nearly half a century to end military and economic wars. At times, her activism has led her to war zones and prisons. She can be reached at: Kathy.vcnv@gmail.com.