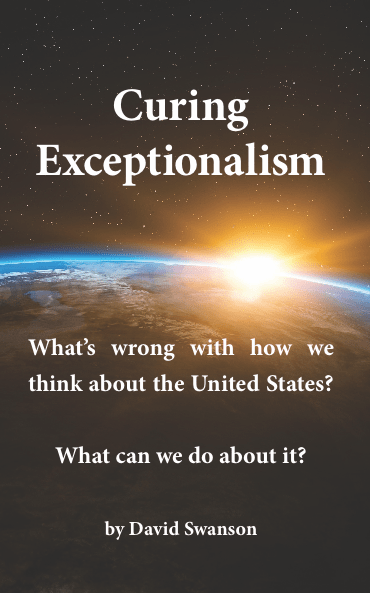 Curing Exceptionalism: What’s wrong with how we think about the United States? What can we do about it?  By David Swanson.

I remember buying a Bob Dylan album about 50 years ago and the thing came with a big poster of the great songwriter.

The Nobel laureate’s lyrics about the “chimes of freedom flashing” echo in Swanson’s book on curing American exceptionalism.  You’ll hear those chimes while reading this book.

Flashing for the warriors whose strength is not to fight

Flashing for the refugees on the unarmed road of flight

An’ for each an’ ev’ry underdog soldier in the night

An’ we gazed upon the chimes of freedom flashing

Swanson, proud ‘neath heated brow, flashes hope of sending the dangerous notion of American exceptionalism on its road of flight. This book is a brilliant, flashing chime of freedom. Swanson and Dylan are dazzling, but Swanson gets the nod for sorting things out. Dylan shrugs his shoulders, as he writes in It’s Alright, Ma (I’m Only Bleeding):

Darkness at the break of noon

Shadows even the silver spoon

The handmade blade, the child’s balloon

Eclipses both the sun and moon

To understand you know too soon

There is no sense in trying

Swanson tries – and makes sense of a lot of things in this book. After an exhaustive search, he can find no justification for the “greatest country on earth” claim.  Like Dylan, who heard the sound of a thunder that roared out a warnin’, Swanson roars out a clear message that American exceptionalist thinking does a great deal of harm to the planet and all who live on it. Swanson and Dylan know their songs well.

Swanson urges us to train ourselves to think and speak in alternative ways, to counter exceptionalist thought.  For instance, he writes, “In exceptionalist nationalism, as perhaps in all nationalism, “we” are to adopt a first-person plural identity alive for centuries, so that “we fought the British” and “we won the Cold War.”  Swanson continues, “This self-identification, has believers focused on noble things “we” did, and away from shameful things “we” did, even though personally he or she deserves neither credit for the former nor blame for the latter.”

This is classic Swanson. We need to watch those pesky pronouns! This sort of theme runs through Swanson’s decade of book writing. After all, “we” didn’t drop the atomic bombs on Hiroshima and Nagasaki or kill millions in Vietnam. The United States government did that, last time I checked.

Swanson writes books that need to be written, like, War is a Lie

More importantly, they need to be read.  In a soldier’s stance, Swanson aims his hand at the mongrel dogs who teach, fearing not that he’d become the enemy in the instant that he preached. Good and bad, he defines these terms, quite clear, no doubt, somehow.

David Swanson pounces with fire on flaming roads using ideas as his maps, while ticking off one statistic after another, suggesting that the USA is “pretty much fair-to-middling” as far as “greatness ratings” are concerned. He writes, “The US has the biggest bucket of cash and has it distributed the most unequally of any wealthy nation. – giving the US the biggest collection of billionaires on earth. US infant mortality rates in 2013 were the highest in the developed world. The US had the highest prevalence of obesity in the developed world.  America has the highest incarceration rate in the world. – nearly 5 times the OECD average. The US youth poverty rate is the highest across the OECD with a quarter of youth living in poverty. The US comes in at 43rd out of 201 countries as far as life expectancy is concerned. It’s anything but exceptional. US homicide rates were 7 times higher than other high-income countries. Compared to other high-income nations, 82% of all people killed by firearms were from the US.” 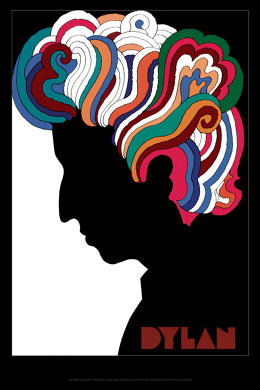 Like Dylan, there’s whimsy in Swanson’s writing, although I’m not sure it’s intended that way. For instance, Swanson writes, “I have left out such claims to glory as most cheese produced, most dogs, most cats, and most roller coasters, not because of any prejudice against such things, but because they seem less significant.”

As human gods aim for their mark

Made everything from toy guns that spark

To flesh-colored Christs that glow in the dark

It’s easy to see without looking too far

That not much is really sacred

Swanson too: “The largest component of exceptionalism seems completely unrelated to facts. The belief in a divine mission is an attitude, not an observation.”

The author quotes Eliassen Hilde Restad of Newsweek fame to capture this observation, “Americans have, throughout their history, believed they are a superior people, believed they are endowed with a unique mission, believed that they will never succumb to the merciless laws of history. Most importantly, it’s an idea that Americans and their leaders have often acted upon in the world.”

After all, the US plays ball with international law by relying on its veto power and its ability to reject the authority of the International Court of Justice or any U.N. treaty or action.

Swanson launches into a discussion of the American flag. He wryly comments, “In much of the world, if you see any flag at all, you can safely ignore it without being suspended from school or shut out of your sports career.”

Dylan, too, addressed these themes in his 115th Dream:

Well, I rapped upon a house

With the U.S. flag upon display

I said, “Could you help me out

I got some friends down the way”

The man says, “Get out of here

I’ll tear you limb from limb”

I said, “You know they refused Jesus, too”

The author expresses contempt for President Obama’s sadly pathetic 2009 Nobel Peace Prize acceptance speech.  The 44th President denounced the work of Gandhi and King, by saying in the same breath, “To say that force may sometimes be necessary is not a call to cynicism – it is a recognition of history; the imperfections of man and the limits of reason.”

Dylan’s take? “God said to Abraham, “kill me your son.” Abe said, “Man, you must be puttin’ me on.”” And, “Sometimes the President of the United States must have to stand naked.”

Swanson pulls no punches, “Since World War II, during what some U.S. academics think of as a golden age of peace, the U.S. military has killed or helped kill some 20 million people, overthrown at least 36 governments, interfered in at least 84 foreign elections, attempted to assassinate over 50 foreign leaders, and dropped bombs on people in over 30 countries.”

He writes, “We often think of the United States as struggling to live up to its noble ideals. The reality is of course that the U.S. government and society have had noble and ignoble ideals and striven to meet and met both. Nobility and heroism have intermingled with cynicism, incompetence, and sadism. And some of it all has been extreme, exceptionally great or awful – and much of it extremely well communicated, promoted, and advertised, for better and for worse.”

Should free academic discourse survive this dark age, Swanson will be studied by generations far in the future.

Swanson argues that American exceptionalism conspires to promote American civilization while devaluing the rest of the world. Americans are people who believe they have the right, the duty, to impose their will on the rest of the world. Swanson’s pen becomes the sword, “Exceptionalism is an attitude that tends to include arrogance, ignorance, and aggression, and these tend to do a great deal of damage.” Eyes wide open, Swanson prophesizes with his pen, for the loser now will be later to win.

Read Curing Exceptionalism: What’s wrong with how we think about the United States? What can we do about it?  By David Swanson.

Pat Elder is a member of the Coordinating Committee of World Beyond War.