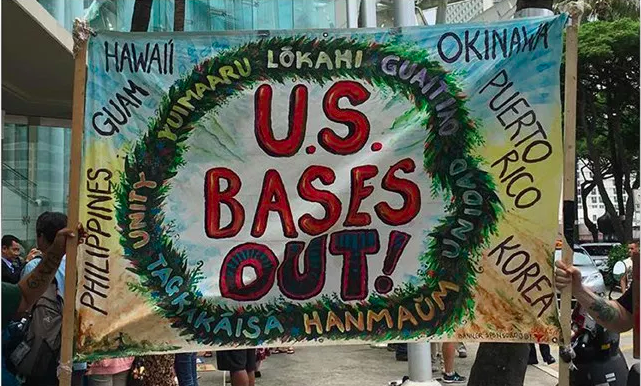 Late last year, a divided Congress approved a military spending bill of 700 billion dollars, more than either the President or the Pentagon had requested. Hundreds of billions will go to US military bases and troops on foreign soil. The US is the largest, most lethal military power in human history with seven geographic commands spanning the globe, but that didn’t stop the new Coalition Against U.S. Foreign Military Bases from holding its first conference at the University of Baltimore from Friday to Sunday, January 12 to 14.

Here are just a few voices from the conference.

Leah Bolger, retired US military commander, full-time peace activist, and past President of Veterans for Peace:

“This conference is the first action, the first event, of a relatively new coalition, which is a coalition against US foreign military bases that has come together with 13 charter organizations. We are joined to address the issue of US foreign bases, which are everywhere—somewhere between 800 and 1000. It’s ridiculous.”

David Swanson, co-founder of World Beyond War and author of the books “War Is a Lie” and “War Is Never Just”:

“Y’know, I watch a lot of basketball games because the University of Virginia is so darn good, and I’m just disgusted because at every single game, they thank the troops for watching from 175—sometimes they say more than 175 or 177—countries. They thank the “almost a million men and women serving our country.” They don’t explain what the service is, they don’t explain why they have to be in 177 countries. They don’t explain that there are only about 200 countries on earth, and that there are at least a dozen more countries they’re not telling us about. These are the ones they admit to.

“What are they doing there? What are they needed for? In some cases, it’s thousands; in some it’s tens of thousands. There are 50,000 troops still in Germany, still winning World War II three quarters of a century later. It’s insanity, and of course it costs hundreds of billions of dollars. People who think that we’re running low on money and we can’t afford things should understand that we could afford anything we wanted if we didn’t do things this stupid.”

“We have a task before us this weekend. We have to struggle among ourselves to build a base line for unity, because we know that all of us may not be there in terms of being prepared to take a clear class line, we may not be in full agreement about what national oppression and national liberation mean, we may not agree about the character of this state. But we can agree that anytime you have this state involved in direct intervention, anytime you have this nation attacking another nation, that is a crime that all of us can be united in opposing.”

The Real News Network, based there in Baltimore, livestreamed the event from gavel to gavel, and I produced a brief KPFA Radio-Berkeley News report while watching and downloading audio. However, I seemed to be the only other press to take any interest, beyond the websites of the conference participants themselves. So on Monday I nominated the conference and its video archive for a Project Censored Award. I recommend all eight sessions now on the YouTube:

In the final session, reps from the 13 founding organizations met to hammer out their unity statement and plan the next conference. The location isn’t yet set, but it will take place on US-occupied foreign soil, so there’s a world of possibilities.

Ann Garrison is an independent journalist who also contributes to the San Francisco Bay View, Global Research, the Black Agenda Report and the Black Star News, and produces radio for KPFA-Berkeley and WBAI-New York City.  In 2014, she was awarded the Victoire Ingabire Umuhoza Democracy and Peace Prize by the Womens International Network for Democracy and Peace.  She can be reached at ann@afrobeatradio.com.