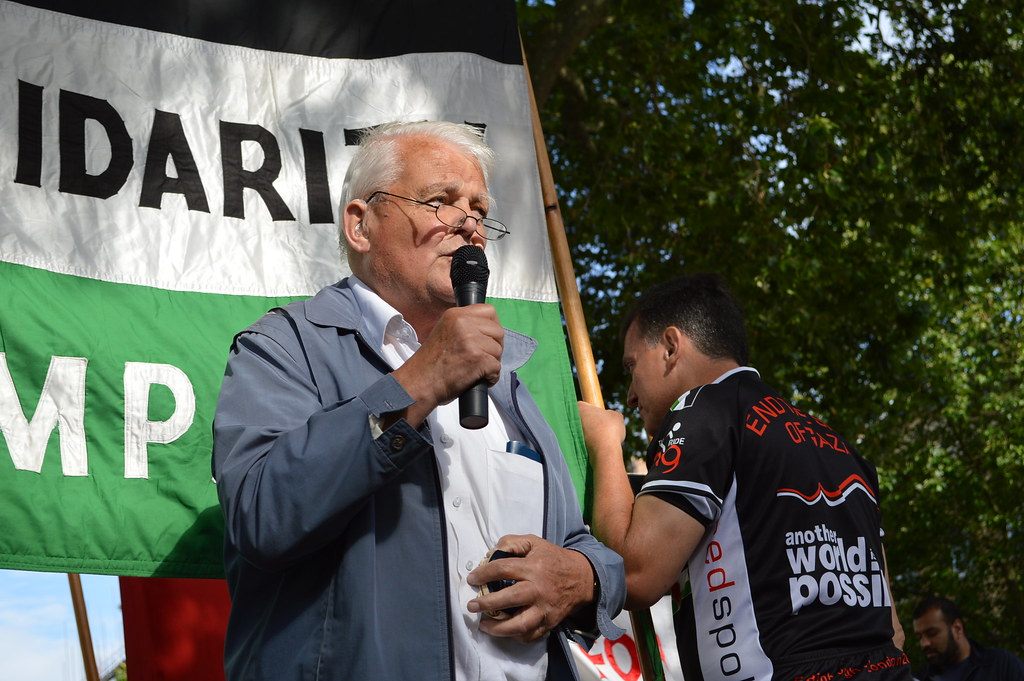 In 1969, Bruce visited Biafra at the height of the Nigerian Civil War – it was his Road to Damascus. He saw the mass starvation of civilians employed as a weapon of war while the British government supplied arms to the Nigerian government. “No other event in my life has ever sharpened my ideas more rapidly… I began to understand how ruthlessly those with power can behave if major interests like oil and trade are at stake. I also began to realise that to talk seriously about relieving poverty without facing up to the issues of militarization is to delude oneself and others.”

Before Biafra, a conventional middle class upbringing had taken him to Stonyhurst School, followed by two years National Service in the Royal Tank Regiment and a Law degree at Oxford. He trained for the priesthood, and was ordained in 1958. After serving as a curate, first in Kensington, then Ladbroke Grove, he became Archbishop Heenan’s Private Secretary from 1963 to 1966. By then a Monsignor, Bruce was appointed Chaplain to the University of London students, and opened the Chaplaincy in Gower Street. His peace and development activities increased. By 1973, at a Campaign for Nuclear Disarmament march, he was exorcising the evil from the Polaris nuclear submarine base at Faslane – “From the willingness to murder, Good Lord, deliver us.”

On leaving the Chaplaincy in 1974, he worked for Pax Christi for three years, before becoming Parish Priest at St Aloysius in Euston. While there he became Chair of CND, until 1980, when he left the parish to be the full time General Secretary of CND.

It was a crucial time. President Reagan, Prime Minister Thatcher and President Brezhnev engaged in bellicose rhetoric while each side began deploying cruise missiles with tactical nuclear weapons. The anti-nuclear movement grew and grew – and in 1987, the Intermediate Range Nuclear Forces Treaty was signed. By then, Bruce was again Chair of CND. In this turbulent decade, he left the priesthood rather than comply with an instruction from the Cardinal Hume to desist from involvement in the 1987 UK general election.

In 1999 Bruce Kent was British co-ordinator for the Hague Appeal for Peace, a 10,000-strong international conference in The Hague, which initiated some major campaigns (e.g. against small arms, the use of child soldiers, and to promote peace education). It was this, along with Professor Rotblat’s Nobel acceptance speech calling for an end to war itself, that inspired him to establish in the UK the Movement for the Abolition of War. Earlier than many in the peace and environment movements, he realised that you cannot achieve peace without also working to avert Climate Change – he made sure MAW’s video “Conflict & Climate Change” saw the light of day in 2013.

Bruce married Valerie Flessati in 1988; as a peace activist herself, they made a powerful pairing, working together on many projects including the London Peace Trail and the Peace History Conferences. As a peace campaigner, even in old age, Bruce was always willing to get on a train to the other end of the country to address a meeting. If he’d met you before, he would know your name. As well as pointing out the idiocy and immorality of nuclear weapons in his talks, he would frequently mention the United Nations, usually to remind us of the Preamble to the Charter: “We the peoples of the United Nations determined to save succeeding generations from the scourge of war, which twice in our lifetime has brought untold sorrow to mankind…”

He was inspirational – both by example, and with his knack of encouraging people to be involved, and to achieve more than they thought they could. He was a genial, cheerful and witty host . He will be deeply missed by peace activists in Britain and around the world. His wife, Valerie, and sister, Rosemary, survive him.