Stop the Deadly Violence in Cameroon

By Tony Jenkins, World BEYOND War 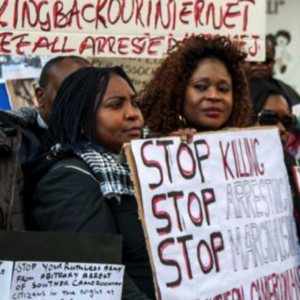 Photo caption: Peaceful protestors in Cameroon calling for an end to violence, Anglophone marginalization, and arbitrary arrest. (Photo: Screen capture from the cover of the Amnesty International Report “A Turn for the worse…”)

Deadly violence in Cameroon is at the precipice of civil war and the world is not paying attention. World BEYOND War calls for immediate action by state and non-state actors, the media, and international civil society to bring an immediate end to this deadly conflict.

The current crisis is rooted in divisions going back to French and British colonial legacies. In late 2016 the minority Anglophone community responded to their ever increasing marginalization by biased Francophone legal, economic and educational policies. Their mostly peaceful protests were met by fierce violence by Cameroonian security forces. 10 peaceful protestors were killed by security forces between October 2016 and February 2017 and an independent report estimates that 122 peaceful protestors were killed between September 22 October 1, 2017 alone (most were killed on Oct. 1 when security forces shot indiscriminately into crowds from helicopters)[i]. The situation deteriorated further from there. Armed separatists have since killed more than 44 members of the security forces and have also targeted teachers and students who were not actively engaging in their political boycott activities. This escalation of violence has led to increased militarization on both sides. Further compounding the crisis, more than 150,000 people have become internally displaced and another 20,000 refugees have fled to Nigeria. Furthermore, increased human rights violations (including documented torture) by security forces has led to increased radicalization of the Anglophone community.

World BEYOND War stands behind the initial recommendations outlined in a recent report issued by Amnesty International (A turn for the worse: Violence and human rights violations in Anglophone Cameroon) and encourages greater responsibility of the media, the United Nations, the African Union, the Commonwealth, and global civil society to assure a quick, peaceful and nonviolent end to this ever increasing crisis.

Amnesty International specifically calls upon Cameroonian authorities investigate a) human rights abuses, b) the use of excess force, c) instances of arbitrary arrest and detention, and d) instances of torture and death in custody. These actions are the bare minimal toward ensuring violators are held accountable. Amnesty also calls for effective victim remediation and the promotion of dialogue. (Read the report for a more detailed list of recommendations)

World BEYOND War adds to Amnesty’s list the following:

For more on the conflict we recommend the following resources:

[i] Honorable Joseph Wirba, a member of the Cameroon House of Assembly, led an independent Commission that came to the 122 estimate. The government reported 20 deaths – the number also cited by Amnesty International. Amnesty International’s reporting has been criticized by both sides in the conflict.