Swords into plowshares | An interview with Paul K. Chappell 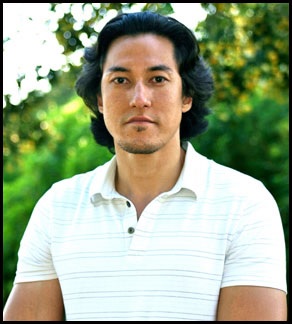 Paul K. Chappell was born in 1980 and raised in Alabama, the son of a Korean mother and a biracial father who’d served in the Korean and Vietnam wars. Leaving the army a deeply troubled man, the older Chappell abused and traumatized young Paul, who nevertheless chose to pursue a military career himself, graduating from the U.S. Military Academy at West Point in 2002 and serving in Iraq as an army captain in 2006. Yet even during his tour of duty, Chappell was starting to doubt that war was ever going to bring peace—in the Middle East, or anywhere else.

Three years later, while still an active-duty officer, Chappell published his first book, Will War Ever End? A Soldier’s Vision for Peace in the 21st Century. He has since written five more books in his seven-book The Road to Peace series. The sixth title, Soldiers of Peace, will be out this fall (2017), and the seventh in 2020. All of the books are written in a reasoned, accessible style, carefully distilling the lessons Chappell has learned over 20 years of personal struggle to transform himself from an angry, wounded young man to a soldier, peace activist, and, for the last eight years, the peace leadership director at the Nuclear Age Peace Foundation.

In his peace leadership role, Chappell travels the world talking about the necessity of ending war and waging peace. Over the last few years, his focus has switched to spreading “peace literacy,” which he explains is a skill-set essential to human survival.

Several years ago, I interviewed Chappell for an article published in The Sun magazine, and reprinted on The MOON as “Ending war.” For this interview, Chappell spoke with me twice by phone. — Leslee Goodman

The MOON: You’ve been championing the cause of peace for 10 years now—even while still a soldier in Iraq. Are you discouraged? Do you feel as if we’re going backwards?

Chappell: No, I’m not discouraged. When you understand the causes of human suffering, nothing that happens is surprising. If I knew a man who ate unhealthy food and smoked, I wouldn’t be surprised if he had heart disease. Nor would I be discouraged, because we know the steps he could take to improve his health and prevent a heart attack.

People have unspoken needs for purpose, meaning, belonging, and self-worth, which are not filled in healthy ways by consumerism and, as a result, are creating a vacuum that can be filled by fanaticism and extremism. Human beings also crave explanations. When things “are going wrong” with the country, for example, people want to know: Why is the economy bad? Why is there terrorism? What’s the explanation for all these mass shootings? This need for explanations is so powerful that if we don’t have an accurate explanation, we’ll invent inaccurate ones. For example, medieval Europeans, craving an explanation for the plague but not knowing what viruses and bacteria were, said that plague was caused by God or the planets.

Taken together, the explanations we believe create our worldview. Having a worldview is as important as having food and water. That’s why, if you threaten someone’s worldview, they’ll often react as if you’re threatening them physically. When Galileo said that the Earth revolves around the sun, rather than the other way around, the Catholic Church threatened to torture him if he did not recant. He threatened their worldview. When you talk politics or religion with someone who disagrees with you, they might become aggressive. Usually this aggression falls into the realm of “posturing,” but sometimes the aggression can become physical—or even lethal—as when people go to war over differing religious or political beliefs.  And just as the fight-or-flight response causes many animals to create distance between themselves and a threat, many people will simply walk away from you, unfriend you on Facebook, or create distance in some other way when you endanger their worldview.

The MOON: Yet it seems that we’re exposed to more types of people, cultures, and worldviews than ever before in human history. Isn’t the world growing closer and more interconnected?

Chappell: Yes, but seeing the world becoming more interconnected has made a lot of people feel more insignificant, or even worthless. When humans lived in small communities they knew they had a place; they belonged; and belonging to that place gave them a sense of worthiness. As the world has become more interconnected globally, we’ve also had breakdowns in community, with the result that more people feel disconnected, alienated, and powerless.

The MOON: Compounded by the fact that maybe they don’t have a job, or can’t afford health insurance.

Chappell: Right. There are two kinds of poverty—material poverty, and spiritual poverty—which is poverty of belonging, meaning, self-worth, purpose, and explanations based on truth. People can suffer terribly from both kinds of poverty, but people suffering from spiritual poverty are far more dangerous than those suffering from material poverty. Hitler didn’t want to rule Germany and conquer Europe because he was hungry and thirsty. He waged war because of psychological, or spiritual, poverty.

The MOON: I’ll grant you that the leaders of war aren’t poor, but isn’t there a lot of economic pain behind current white anger and backlash—the white supremacist nationalism—that we’re seeing now?

Chappell: Yes; but I think that people can mistakenly believe that material poverty is the leading cause of problems in our world, but most of the people orchestrating extremist causes are not poor; they’re well-off. Poverty, hunger and injustice aren’t the only soil that terrorism and violence grow in.

Perhaps I can simplify by saying that the reason I’m not surprised by current conditions is that we do not live in a peace-literate world. Our situation can be likened to going to see a basketball game where none of the players know how to play basketball. Of course it would be a mess. People are not peace literate, so of course things are a lot messier than they need to be. If we were to treat peace like any other skill set or art form, we’d be in a lot better shape; but we don’t, so we’re not. Peace is the only art form I can think of where people presume you can be effective without getting some kind of training. Martial arts, filmmaking, painting, sculpting, playing football, soccer, basketball, the violin, the trumpet, dance. People don’t expect to be proficient at any of these without some kind of training and practice.

Consider mathematics. I took math for about fourteen years in school, from kindergarten all the way through Calculus II. Math is extremely valuable for some endeavors, but I never use my mathematics training—not even at the elementary school level! I just use a calculator. I use my peace literacy training, however, every day—in the workplace, in my relationships, among strangers, when I engage on social media.

Peace literacy is even more complex than high-level mathematics, or literacy in reading and writing, but we don’t teach it. Peace literacy involves seeing peace as a practical skill-set and includes seven forms of literacy that help us create realistic peace: literacy in our shared humanity, in the art of living, in the art of waging peace, in the art of listening, in the nature of reality, in our responsibility to animals, and in our responsibility to creation. Some people are taught some of the art of living skills at home—skills like how to resolve conflict, how to calm ourselves down, how to calm other people down; how to overcome fear; how to build empathy—but many parents don’t have these skills, and many people learn bad behaviors from their parents. And how often do you turn on the television and see people resolving conflicts in a peaceful, loving manner? Where can people go to see peace literacy skills demonstrated? In fact, our society teaches much that is counter to peace literacy training. For example, our society often teaches us to suppress our empathy; to suppress our conscience; to not listen. We need to recognize that peace literacy is a complex, extremely valuable skill set, essential to humanity’s survival, and begin teaching it in schools.

The MOON: You’ve previously cited Europe as an example of the progress the world has made in realizing we have more to gain through peace and cooperation than we do from war and divisiveness. Does the Brexit vote, or the rise of right-wing nationalist groups in Europe, give you cause for concern?

Chappell: They’re definitely cause for concern. They should be taken very seriously in terms of the dangers they pose to peace and justice. We need to recognize that there are deep, underlying problems in our culture that aren’t being addressed. Taking these movements seriously means taking their grievances seriously.

In The Cosmic Ocean I identify nine basic non-physical human needs that drive human behavior. They include: purpose and meaning; nurturing relationships (trust, respect, empathy, being listened to); explanation; expression; inspiration (which includes role models; this need is so important that if good ones aren’t available, people will settle for bad ones); belonging; self-worth; challenge (the need to overcome obstacles to grow into our full potential); and transcendence—the need to transcend time. I also discuss how trauma can become tangled up in these needs and distort their expression. Trauma is an epidemic in our society and one that I understand. When I was in high school I badly wanted to join a violent extremist group. One reason I didn’t is because back then there were no violent extremist groups that would accept a member who was part Asian, part black, and part white.

The MOON: And why did you want to do that?