A Century Without War Is Needed to Survive Environmental Threats 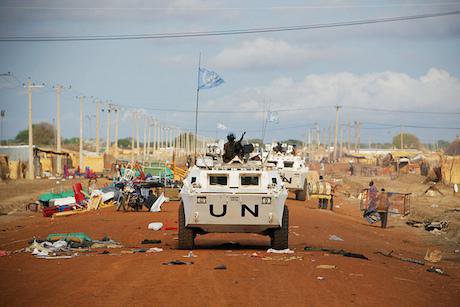 Huge military budgets will not protect us from extinction. Nations must redirect spending towards human security and peacekeeping now.

Defence is a word that usually evokes images of soldiers and tanks. But as modern and future enemies shape-shift into unprecedented forms, does the almost $2trln that was spent globally on defence in 2019 actually protect people from harm? The answer is clearly no.

Military spending on this scale is a vast misallocation of resources from where governments’ spending needs to be focused. Climate change, pandemics, biodiversity loss and growing inequality all pose severe threats to the security of humans on a global level.

After a year in which traditional defence spending was impotent against the havoc wreaked by COVID-19 on the world – now is the time to redirect that spending to areas that are immediate threats to human security. A 10% redirection annually would be a good start.

The most recent UK government data at publication date shows that more than 119,000 people in the UK had died within 28 days of a positive COVID-19 test. The deaths are now close to almost twice the 66,375 British civilians killed in the Second World War. The race to create vaccines has shown that the scientific community’s research and development skills and the logistical might of industry can be quickly mobilised to support the common good, when they’re supported by global cooperation.

Almost 30 years ago we convened a workshop to reflect on the opportunities and threats posed by the end of the Cold War. This resulted in the publication of a book, ‘A World Divided: Militarism and Development after the Cold War’, which was reissued last month. We sought to promote a less divided world that could respond to the real challenges to human security, rather than a military response that would exacerbate them.

The idea of redirecting military spending to address these challenges, which, if left to themselves, would lead to further conflict, is not new. But the time to begin such a redirection is now, and it is urgent. If governments are going to achieve the UN’s agreed Sustainable Development Goals (SDGs) and, as the UN Charter says, seek peace by peaceful means, this shift needs to begin now – and in every country.

We recognise that conflicts between countries will not go away overnight or even within a couple of generations. But spending must be progressively redirected away from violent means of addressing them. Proper effort must go into creating new jobs – rather than more unemployment – through this process. If we fail in this, then the risk of destructive wars this century remains high and will be another threat to human security.

Armed forces’ logistical skills should be redeployed towards preparing for future disasters.

Moreover, as the UN’s 2017 report, ‘The State of Food Security and Nutrition’, noted: “Exacerbated by climate-related shocks, conflicts seriously affect food security and are a cause of much of the recent increase in food insecurity. Conflict is a key driver of situations of severe food crisis and recently re-emerged famines, while hunger and undernutrition are significantly worse where conflicts are prolonged and institutional capacities weak.” Violent conflict is also the main driver of population displacement.

Last year was the 75th anniversary of the founding of the UN Food and Agriculture Organisation. Also last year, the World Food Programme was awarded the Nobel Peace Prize, not only “for its efforts to combat hunger”, but also “for its contribution to bettering conditions for peace in conflict-affected areas and for acting as a driving force in efforts to prevent the use of hunger as a weapon of war and conflict”. The announcement also noted: “The link between hunger and armed conflict is a vicious circle: war and conflict can cause food insecurity and hunger, just as hunger and food insecurity can cause latent conflicts to flare up and trigger the use of violence. We will never achieve the goal of zero hunger unless we also put an end to war and armed conflict.”

As COVID-19 exacerbates inequalities, more people are becoming food insecure – in poor and rich countries alike. According to the UN’s 2020 report, ‘The State of Food Security and Nutrition in the World’, almost 690 million people went hungry in 2019 and COVID-19 could push more than 130 million more people into chronic hunger. That means one in every nine humans going hungry most of the time.

The research group, Ceres2030, has estimated that to reach the SDG’s zero hunger goal by 2030, $33bn per year is needed, with $14bn coming from donors and the rest from affected countries. A 10% annual redirection of military spending would have a significant effect on this area. It would also help to ease conflicts if it was redirected towards increasing the UN’s peacekeeping budget from $6.58bn for 2020-2021.

Furthermore, work could begin to redeploy the armed forces to become national and international disaster preparedness and rescue forces. Their logistical skills have already used in distributing vaccines in the UK. After retraining in collaborative skills, they could share this knowledge with other nations, which would also help to calm tensions.

There is now an overwhelming case for think tanks, academics, governments and civil society in general to look at what kind of scenarios will help us reach 2050 and 2100 without destructive wars. The global challenges thrown up by climate change, biodiversity loss, growing inequality and further pandemics are quite enough without the violence of war to help them along.

Real defence spending ensures that everyone can eat well, no one lives in poverty, and the destabilising effects of climate change and loss of biodiversity are halted. We need to learn how to build and maintain cooperation with others while dealing with the tensions between nations diplomatically.

Is it possible? Yes, but it requires a fundamental change in the way that security is currently understood.