A Joint Appeal of Korean and Japanese Citizens to the U.S. Government and Civil Society

US government and civil society, please do not be party to the Japanese Government’s refusal to settle historical wrongs: Correct historical awareness and an end–of–war declaration in Korea are levers for peace in Northeast Asia.

We send you our warm greetings of peace from Japan and Korea. We hope this appeal finds you well, and we wish to begin with the context out of which it has come.

Based on a correct memory of the painful history between Korea and Japan, in July last year the civil society and religious communities in Japan and Korea launched the “Korea–Japan (Japan–Korea) Reconciliation and Peace Platform” (here in after referred to as the “JKPlatform”) to serve as a catalyst for a new era of reconciliation and peace. With the hope of reconciliation and peace between Korea and Japan, the JKPlatform comes together with cooperation and solidarity through a correct perception of history, a permanent peace settlement on the Korean Peninsula and protection of Article 9 in Japan’s constitution, denuclearization and disarmament in East Asia, and human rights and peace education for the next generation.

Last February 4th, we heard a report that President Joe Biden and President Moon Jae–in reached a consensus that, “cooperation between South Korea, the United States, and Japan is important for Northeast Asian peace and prosperity.”

However, we are concerned that the US government, in order to strengthen US–Korea–Japan militarycooperation, is urging the Koreanand Japanese governments to reach a political settlementthat will wipe away the past colonial legacy and the human rights issues including the enforced labor and the Japanese military sexual slavery. We do not want an agreement that putsnational interests and military alliances first, forcing the victims of colonial rule to compromise and keep silence. Any political compromise that sets aside the issue of historical awareness will destabilize Korea–Japan relations and fail to bring about lasting peace in the region.

Furthermore, the Korean War must also come to an end for peace and prosperity in Northeast Asia. We demand that the U.S. government develop policies toward an end–of–war declaration for the Korean War and the conclusion of a peace agreement.

We earnestly appeal to U.S. civil society and religious communities for their loving attention, active support, and solidarity to ensure that the U.S. government positively responds to the following demands.

First, we ask the U.S. government to respect the recovery of human rights for thevictims of war crimes by the former Japanese military.

The U.S. government’s apology and reparationfor the forced internment and unfair treatment of Japanese immigrants during World War II set a good example for the international community.The U.S. government was involved inthe process in which Korea and Japan reached to the 1965 JapanKoreaTreaty on Basic Relations and the 2015 Comfort Women Agreement. However, as you are aware, these two agreements did not reflect the intentions of the colonial victims, which has now become a root cause for the current unstable relationship between Korea and Japan.

We believe that the current Biden administration, whichnowemphasizes human rights, shouldbe active in restoring the human rights of war victims.We must rememberand recognizethat Germany made possible a new start in post–war Europe by reflecting on and remembering their own crimes against humanity committed against Jews.

Second, we demand that the U.S. government implement policies toward ending the Korean War and concluding a peace agreement.

We hope the Biden administration will consolidate its efforts to improve the relationship between the two Koreas, between Korea and Japan, and between Korean and the U.S. by advancing the peace process on the Korean Peninsula. We also hope that Korea will not be included in the QUAD alliance that willstrengthen the new Cold War system in Northeast Asia and strengthen the division system on the Korean Peninsula.

There was no direct confrontation between the U.S. and the Soviet Union in the East–West Cold War, but we can never forget the fratricidal Cold War in Asia.However, since that war has not yet officially ended it remains a fundamental cause of the violation of the peace and human rights of the people on the Korean Peninsula. We reiterate that an agreement to end the Korean War cannot be a diplomatic card calling for the denuclearization of the DPRK. This is ending the disastrous history of war and the history of divisionon the Korean Peninsula. For peace and stability on the Korean Peninsula aswell as in Northeast Asia, we once again demand that the U.S. government implement policies that declare an end to the Korean War and conclude a peace agreement.

We sincerely appeal for the active support and solidarity of U.S. civil society, religious communities, and political leaders, hoping that they will share our concerns for remembering the past history correctly,respecting the human rights, making peace, and especially for the establishing theJapan–Korea relations based on justice. 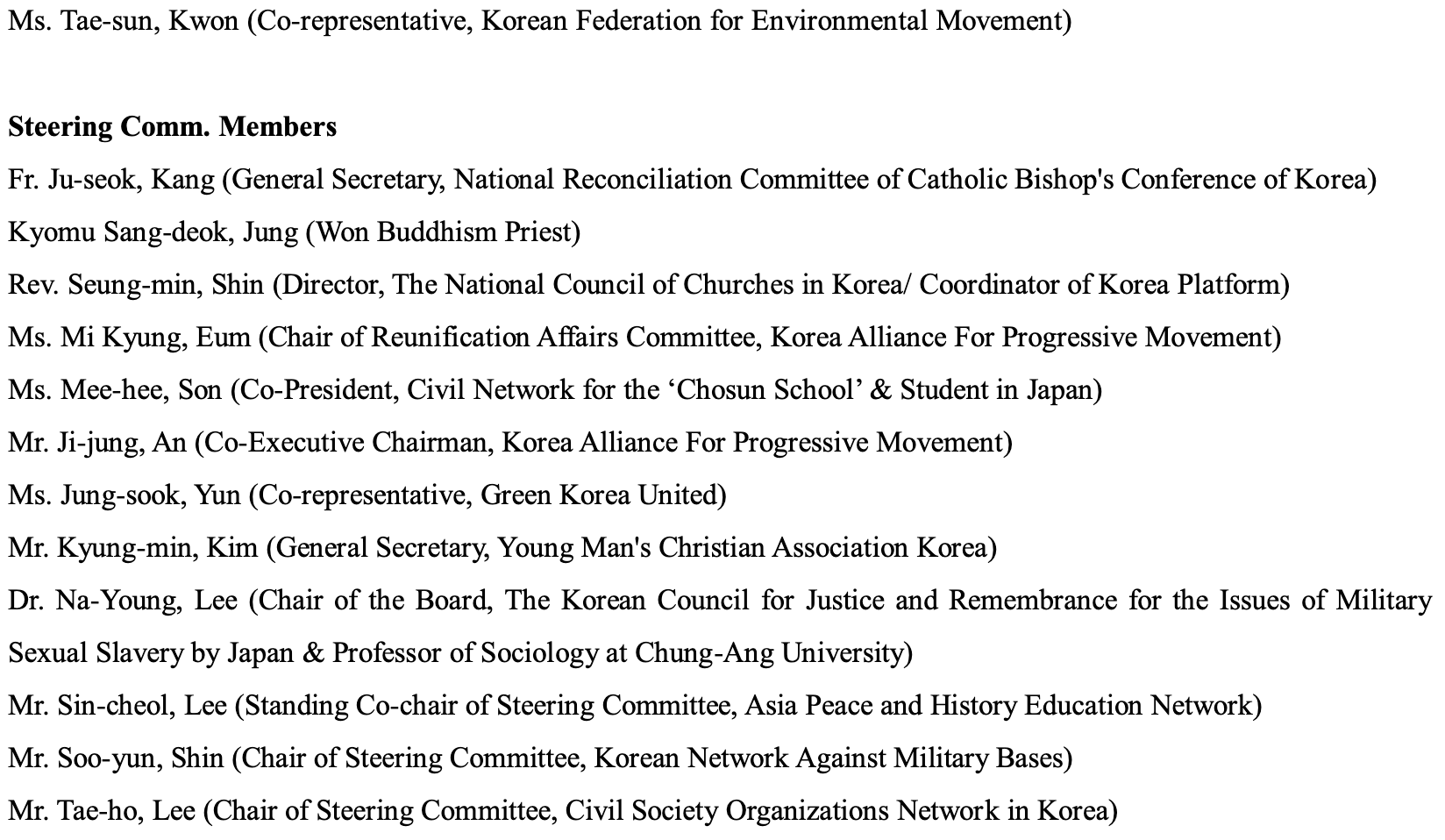 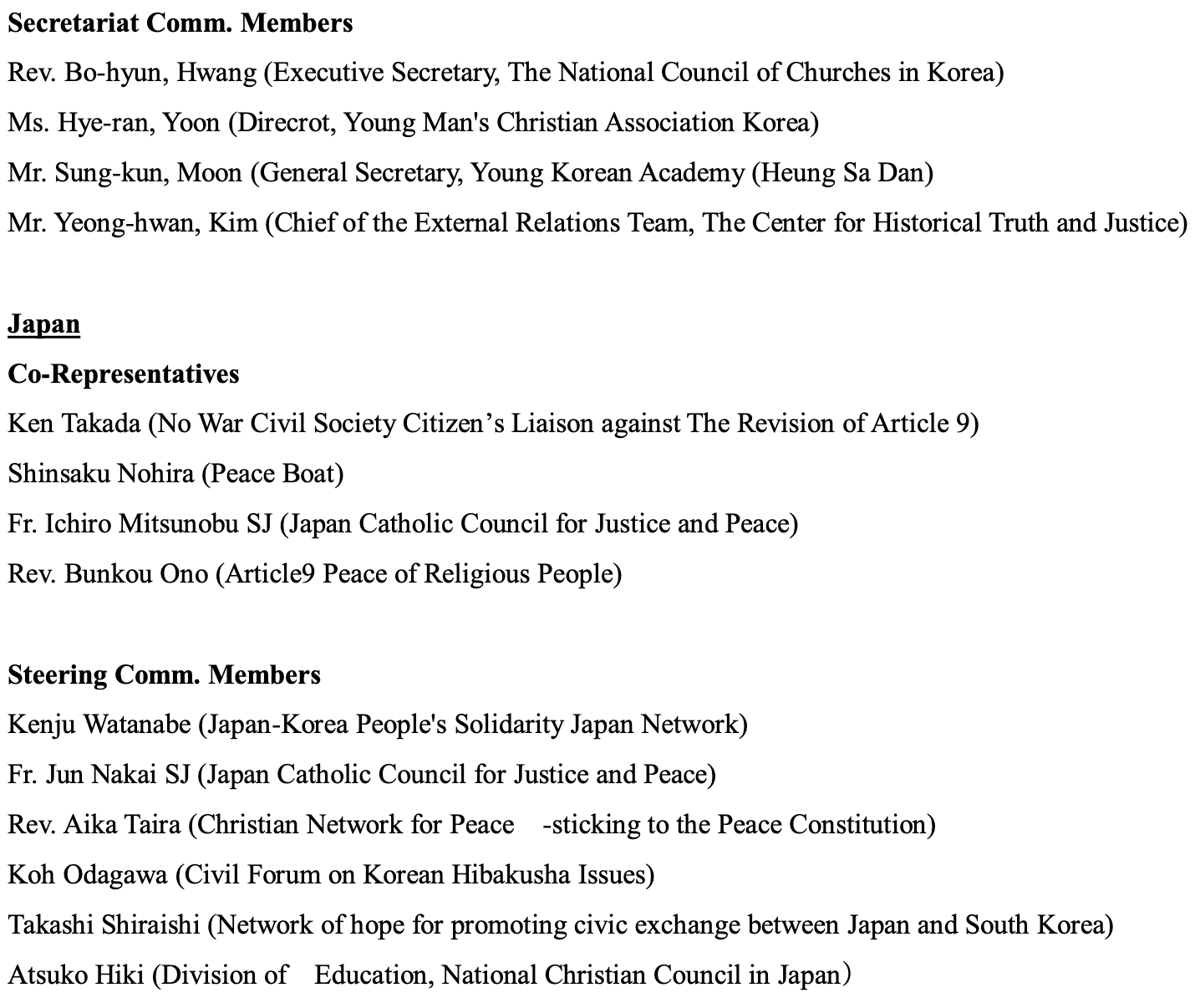 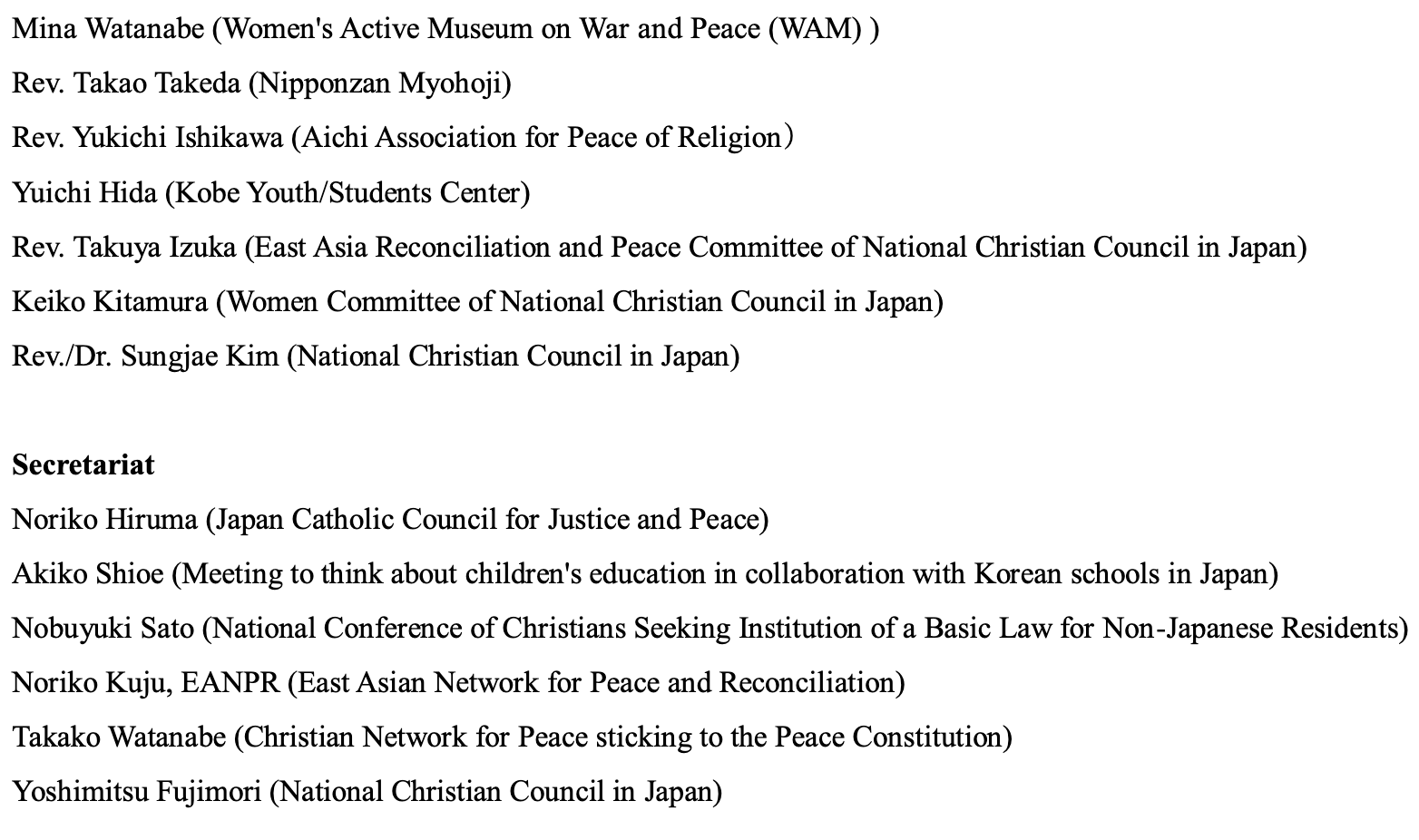