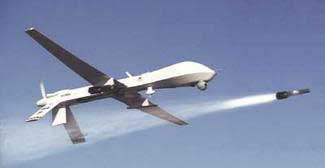 By now you know the drill: The CIA or U.S. military forces unleash a drone strike or other aerial bombardment in Afghanistan, Pakistan, Syria, Iraq, Yemen, Somalia or any other country that the United States claims the right to attack.

A U.S. government spokesperson reports 5 or 7 or 17 or 25 or whatever number of “militants” killed — Taliban, or al Qaeda or ISIS/ISIL/Islamic State fighters — according to its fill-in-the-blanks press release. Wire services, mainstream newspapers, television newscasters dutifully report in brief fashion on another successful drone or missile strike, fulfilling minimal journalistic standards by attributing it to the Pentagon, or intelligence or U.S. government sources — sometimes even naming the spokesperson who issued the news release.

And then — usually nothing. Yes, sometimes someone with a little clout raises a stink — say the Afghan president, or some prominent local official who was an eyewitness to the attack, or Doctors without Borders after the U.S. attack on their Afghanistan hospital in October. (* See footnote.) In such challenges to the Americans’ claims of killing only “militants,” these pesky eyewitnesses contend that many of those killed were actually noncombatants, even women and children.

But on those occasions when U.S. officials are confronted with too-strong evidence of civilian casualties, they typically issue an apology (while not usually admitting civilians were actually killed), promise an investigation — and then that’s the last we ever seem to hear of it in the mainstream press.

Now, an American University (A.U.) academic, Jeff Bachman, has documented what some readers may have surmised in reading drone news coverage over the years, but didn’t have the data to back it up. In examining articles by The New York Times and Washington Post in the immediate aftermath of U.S. drone strikes between 2009 and 2014, Bachman concluded:

“Both papers have substantially underrepresented the number of civilians killed in drone strikes in Pakistan and Yemen, failed to correct the public record when evidence emerged that their reporting was wrong and ignored the importance of international law.”

Bachman’s research dovetails with The Intercept’s recently published “Drone Papers” articles, which among other things document the U.S. government’s lying to the press and public about the number of noncombatants killed in drone strikes.

Bachman, professional lecturer in human rights and the co-director of Global Affairs M.A. Program at A.U.’s School of International Service, examined a sample of 81 Times articles and 26 Post articles published within two days of particular drone strikes between 2009 and 2014. He then compared the two papers’ reporting to the research and tracking of drone strikes by the London-based The Bureau of Investigative Journalism (TBIJ). He said he considered TBIJ’s data authoritative “because they used a methodology that has been endorsed by the Center for Civilians in Conflict and Human Rights” at Columbia University’s Law School.

“This trend of underreporting of civilian casualties means readers are not being informed of the real consequences of drone strikes in Yemen and Pakistan,” Bachman wrote. “It represents a failure by journalists at these papers to view critical government claims regarding who is killed in particular strikes.”

Even worse, Bachman reports what happened when he contacted both newspapers to question them “about the inaccuracies in their reporting on civilian casualties, and to see whether either newspaper published corrections” about civilian deaths from drone strikes. “The answer from both was that they had not,” he wrote.

Read Bachman’s article to see the full summary of his findings and the exact comments he reports receiving from Times and Post representatives. But for one sample of mainstream media indifference to this issue, consider what Bachman reported he was told by Sylvester Monroe, The Post’s assistant managing editor.

Monroe, wrote Bachman, “stated that when using ‘official sources’ it is impossible to ‘independently verify which of the dead were members of militant groups and which might have been innocent civilians.’”

According to Bachman, Monroe added this amazing disclosure: “Even if the CIA were to acknowledge that its count was inaccurate, it would not be up to us to run a correction.” Let that sink in: The Post will apparently not make corrections of a spy agency’s lies and misrepresentations even in the unlikely event the agency itself admits them.

Bachman also noted that the term “human rights” — and various equivalents — showed up in only 5 of The Times’s 81 drone attack stories, and in only one of the 26 Post articles. The term “laws of war” or “laws of armed conflict” — needed to “place the drone strikes in their international legal context” — were not mentioned in any of the articles.

“Without government transparency and accurate reporting, whistleblowers, like the source of The Intercept’s ‘Drone Papers,’ are the only source for information that will allow us to understand the real consequences of the drone strikes,” Bachman concluded.

This work is licensed under a Creative Commons Attribution-ShareAlike 3.0 License.

About John Hanrahan
John Hanrahan, currently on the editorial board of ExposeFacts, is a former executive director of The Fund for Investigative Journalism and reporter for  The Washington Post,  The Washington Star, UPI and other news organizations. He also has extensive experience as a legal investigator. Hanrahan is the author of  Government by Contract  and co-author of Lost Frontier: The Marketing of Alaska. He wrote extensively for NiemanWatchdog.org, a project of the Nieman Foundation for Journalism at Harvard University.