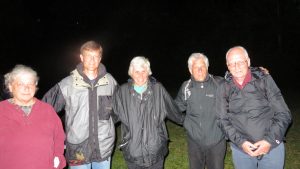 An international group of five peace activists got far inside the Büchel Air Base in Büchel, Germany, after nightfall on Monday, 17 July 2017, and for the first time in a 21-year long series of protests against the deployment of US B61 thermonuclear bombs there, climbed on top of one large bunker used for nuclear weapons. After cutting through two exterior fences and two more fences surrounding the large earth-covered bunkers, the five spent more than one hour unnoticed sitting on the bunker. No notice of the group was taken until after two of them climbed down to write “DISARM” on the bunker’s metal front door, setting off an alarm. Surrounded by vehicles and guards searching on foot with flashlights, the five eventually alerted guards to their presence by singing, causing the guards to look up. The internationals were eventually taken into custody more than two hours after entering the base.

The five, Steve Baggarly, 52, of Virginia; Susan Crane, 73, of California; John LaForge, 61, and Bonnie Urfer, 65, both of Wisconsin; and Gerd Buentzly, 67, of Germany, said in a statement titled All Nuclear Weapons are Illegal and Immoral: “We are nonviolent and have entered Büchel Air Base to condemn the nuclear weapons deployed here. We ask Germany to either disarm the weapons or send them back to the United States for disarming,” it said in part.

An hour after being detained, searched and photographed, the five were released through the base’s main entrance.

The action came at the end of an “international week” at the base organized by “Non-violent Action to Abolish Nukes” (GAAA). The effort was part of a 20-week-long series of actions—”Twenty Weeks for Twenty Bombs”—that began March 26, 2017 organized by a 50-group coalition campaign, “Büchel is Everywhere, Nuclear Weapons Free Now!” Three other nonviolent direct actions took place during the week, one of which succeeded in its demand to see base commander. Oberstleutnant Gregor Schlemmer, actually appeared at the site of a highway blockade and agreed to received a copy of the newly-adopted UN Treaty on the Prohibition of Nuclear Weapons from activist Sister Ardeth Platte, OP, of Baltimore, Maryland.

More than 60 people from around the globe—Russia, China, Mexico, Germany, Britain, the United States, The Netherlands, France and Belgium—participated.

Activists from the United States came to Büchel to highlight the plans for modernization of the B61. Ralph Hutchison, from Oak Ridge, Tennessee, where a new thermonuclear core for the “B61-Model12” will be manufactured, said: “It is important that we show this is a global movement. The resistance to nuclear weapons is not limited to one country. The new B61-12 program will cost more than $12 billion, and when production starts sometime after 2020, Büchel is scheduled to get new nuclear bombs.”

“The idea that nuclear weapons provide security is a fiction believed by millions,” said John LaForge, of Nukewatch in Wisconsin, which organized the 11-person delegation from the US. “Tonight we showed that the image of a secure nuclear weapons facility is also a fiction,” he said.

“Everyone’s children and everyone’s grandchildren have a right to a nuclear weapons-free world. All of creation calls us to life, to disarmament, to a world of justice—for the poor, the Earth, and the children,” read the statement, released in both German and English.

Susan Crane, a Plowshares activist from the Redwood City, Calif.
Catholic Worker, said, “The Commander of the Base, Oberstleutnant Schlemmer, came to meet us at 3:00 a.m. and told us what we did was very dangerous and we might have been shot. We believe the greater danger comes from the nuclear bombs that are deployed at the Base.”

Büchel is Everywhere, Nuclear Weapons Free Now! continues until August 9, 2017 and will close with a commemoration of the US atomic bombing of Nagasaki, Japan.