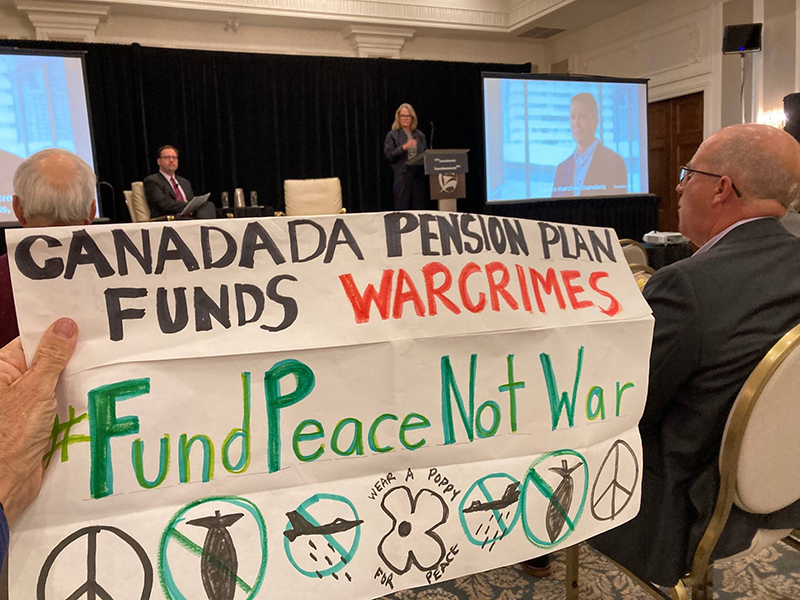 Canada – Throughout the month of October, dozens of activists showed up across the country at the Canada Pension Plan (CPP) Investment’s biannual public stakeholder meetings. Activists in at least six cities (Vancouver, London, Halifax, St. Johns, Regina, and Winnipeg) argued that the Canada Pension Plan’s investments in arms manufacturers, fossil fuels, and companies complicit with international law violations destroy our future, rather than secure it.

Criticism of CPP’s unethical investments was the main theme of the stakeholder meetings across the country. The CPP has $21.72 billion invested in fossil fuel producers alone and over $870 million in global weapons dealers. This includes $76 million invested in Lockheed Martin, $38 million in Northrop Grumman, and $70 million in Boeing. As of March 31, 2022, CPPIB had $524 million invested in 11 of the 112 companies listed in the UN Database as complicit with Israeli violations of international law.

Attendees concerned with CPPIB investments dominated the meetings. Nonetheless, they received little to no feedback from CPP leadership regarding their concerns. In response to questioning, Michel Leduc, Senior Managing Director of the CPPIB, claimed that “shareholder engagement” is more effective than divestment, but presented little evidence to support this statement.

In Vancouver, the first location of the tour, the point was raised that Canadians are very concerned that the pension fund is not being invested ethically. “Surely, the CPPIB is able to achieve a good fiscal return without having to invest in companies which fund a genocidal, illegal occupation of Palestine,” said Kathy Copps, a retired teacher and member of BDS Vancouver Coast Salish Territories. “It is shameful that the CPPIB only values protecting our investments and ignores the terrible impact we are having around the globe,” continued Copps. “When will you respond to the March 2021 letter signed by over 70 organisations and 5,600 individuals urging the CPPIB to divest from companies listed in the UN database as complicit in Israeli war crimes?”

While the CPPIB claims to be dedicated to “the best interests of CPP contributors and beneficiaries”, in reality it is extremely disconnected from the public and operates as a professional investment organisation with a commercial, investment-only mandate. “Despite years of petitions, actions, and public presence at the CPPIB’s bi-annual public meetings, there has been a serious lack of meaningful progress to transition towards investments that invest in the best long-term interests by bettering the world rather than contributing towards its destruction,” said Karen Rodman of Just Peace Advocates.

On Tuesday, November 1st from 12:00 – 1:00 pm ET, the CPPIB is hosting a National Virtual Meeting which will mark the end of the 2022 CPPB public meetings. Members of the public can register here.