Afghanistan Won’t Give Up 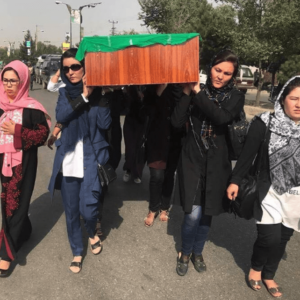 In a recent attack by Islamic State inside a classroom in Mawoud Academy in Kabul, at least 43 students lost their lives, and 64 others were injured. Many of the murdered students were from low-income families and had traveled from different parts of the country in search of educational opportunities.

Teenaged Rahila was among the victims who lost her life in this heinous attack. Her hope for and determination in helping to create a peaceful Afghanistan can be seen in excerpts of her dairy shared by her family members.

“I can be the Rahil that her society needs her desperately in its pursuit of prosperity and progress. This society will overcome its current crisis with solutions drawn from the knowledge and education of its youth, the like of Rahil…,” she wrote.

Among those killed in the recent attack were twins Attaullah and Farzana. Born in Ghazni, they moved to Kabul to prepare for the Kankor examination, Afghanistan’s university entrance exams. Attaullah was the oldest son of his family, and he was the source of inspiration and courage to his other four young siblings. According to his younger brother, Attaullah used to buy them regularly, and his dream was to come to the United States for his master’s degree.

Madina Laly is another victim of the terrorist attack. She was a recent high school graduate who came to Kabul for the same purpose as of other victims of Mawoud Academy. Leaving her hometown for the pursuit of education, she was determined to help her family and country after she gets a good education.

Rahila, Attaullah, Farzana, and Madina were examples of the young generation of Afghanistan who search for solutions to four decades of war in their education. They have chosen education as their weapon to fight against terrorism and poverty in the country, but they continue to face violence and live in a constant state of insecurity.

Despite the heartbreaking and traumatizing killings of young students, the families and friends of the victims of this ISIS attack and previous terrorist bombings have shown incredible courage, resilience, and persistence. While grieving the loss of their kids, sisters, and brothers, they have shown up to resist. Rahila’s family, for example, decided to launch a library in her honor and provide the space to learn to other youth. Madina’s father decided to spend the funds allocated for his daughter’s funeral on medical treatment for her injured classmates. In an inspiring. In an inspiring and heartbreaking announcement, Madina’s family wrote:

“If you murder one of our students, we will take the hands of five others and take them to schools and universities. We will rise from the blood and ashes and seek knowledge. No one can erase us.”

The family has also planned to help five other young women by providing their education expenses.

To see such beautiful and powerful resistance in the face of a war crime is inspiring. The people of Afghanistan have shown once again that terrorism will not stop us from leading our country towards progress.