America: It’s Going to Be a Wild Ride 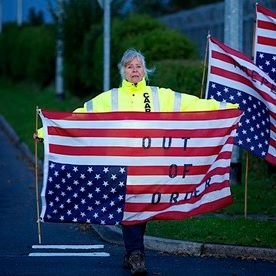 I watched Donald Trump’s inaugural speech yesterday with three other housemates and none of us were impressed.  He’s living in another age – I see Trump trying to hang on to the long passed time of American military supremacy and economic domination.  One last gasp before the US empire crashes under the weight of its own hypocrisy and contradictions.

He said a few things that were decent but one must question them as pure political rhetoric as just a quick review of his cabinet appointments (full of corporate operatives) strongly undercuts his claims that he will return the power to the people that the ‘elites in Washington’ have unfairly taken from them.

Trump blames other nations (especially China) for ‘stealing our jobs’ but we all know that it was the absolute greed of the corporations that drove them to close production plants across America and move jobs to places overseas where labor was cheaper and environmental regulations were virtually non-existent. Just look at the air quality in India and China for example.  Now in order to ‘bring those jobs home’ Trump, and the right-wing dominated Congress, want to finish turning the US into a third-world dictatorship where ‘regulations on the job creators’ are a thing of the past.

Trump will likely finish off what little good will might still exist toward America around the globe.  The inevitable collapse of the US imperial project will now accelerate.

Obama often fooled many people overseas (and at home) with his slick talk and friendly demeanor – even while he was dropping bombs on Libya as he did just the day before Trump took his oath of office. Donald Trump won’t be able to pull off that magic trick so easily.

I believe the key organizing strategy in the coming four years on an international level will be to utterly reject US leadership on virtually every issue – from climate change to NATO and beyond.  The world must isolate the US as a reactionary and undemocratic rogue state.  Protests around the world should not just focus on Trump but on the US imperial project that is now totally committed to global domination for the benefit of corporate interests.  Concern for the people of the world or the environment is off the table in Washington.  Democracy is a meaningless word now.

The people of the world must demand that their leaders completely reject the US as a role model or a voice of reason.

This corporate take over of the US government runs far deeper than Trump.  He is not an aberration from the norm – Trump represents the norm in Washington.  We are now ruled by Christian fundamentalism (the American Taliban), an economic expansion ideology that has no concern for the planet, and a military ethic that carries with it strong Puritan evangelical strains.  Greatness only means domination – of everything.

For those of us living here in America we must not restrict our protests to calling out Trump.  We must recognize how the Democrats regularly collaborate with the right-wing reactionary corporate forces.  Just days ago in the US Senate 12 Democrats joined with Republicans to kill a bill that would have allowed American citizens to purchase cheaper medicines from Canada.  The Democrats support swung the vote to satisfy the interests of big pharma.  In the US we must see that we don’t have a legislative solution to our problems as the corporations have the government under lock down and they have the key$.

Public protest and non-violent civil resistance in the tradition of Gandhi, ML King, and Dorothy Day are where we must move now – collectively as a nation.

In Washington we now have the classic definition of fascism – the wedding of government and corporations.  It would have been the same story if Hillary Clinton had been elected.  She would have been more ‘sophisticated’ and not come across quite as brash and impolite as Trump does. That would have been enough for many Americans – to them it is no problem that we rule the world just as long as we do it with a reassuring smile.  Trump has broken that mold.

Folks had better hang on because this is going to be a wild ride.  Victory will not come to those who think that building support for their single-issue agenda is the way out of this dark moment.  The old business model of every organization fending for itself won’t work any more.

Only by connecting all the dots and working to build a broad and unified movement across the nation – linked with our friends internationally – can we put the brakes on this fall over the cliff that the new corporate government in Washington is pushing us toward.

We need to create a unified positive vision such as converting the military industrial complex to build solar, wind turbines, commuter rail systems and more.  This would serve the interests of labor, environmental groups, the unemployed, and the peace movement.  A win-win for all.