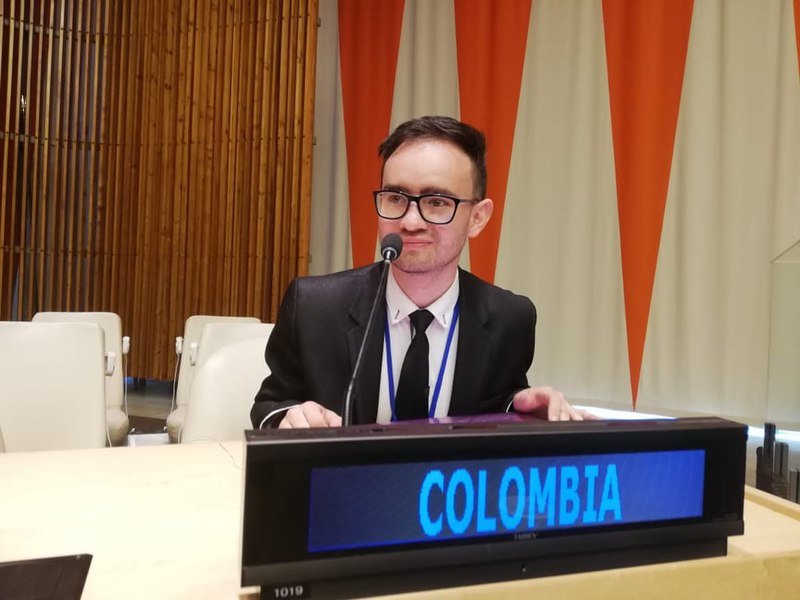 Colombian peace activist and World Beyond War’s Advisory Board and Youth Network member Angelo Cardona received the Diana Award in honour of the late Diana, Princess of Wales for his outstanding contribution for peace in Latin America.

The Diana Award was established in 1999 by the British government as a way to honour the legacy of Princess Diana. The award has become the most prestigious award that a young person can receive for their social action or humanitarian work. The award is given out by the charity of the same name and has the support of both her sons, The Duke of Cambridge and The Duke of Sussex.

Cardona, is a peace and human rights activist from Soacha, Cundinamarca. From a very young age, he became interested in peacebuilding issues due to the violence that took place in his community. He grew up as a beneficiary and volunteer of Fundación Herederos, a Christian organization that promotes humanitarian work and social transformation in the municipality of Soacha.

At age 19, Cardona began his work as an officer of the International Peace Bureau, an organization that was awarded the Nobel Peace Prize in 1910. That same year he co-founded the Ibero-American Alliance for Peace; organization which promotes peacebuilding, human rights and disarmament in the Ibero-American region. As part of his work, he has denounced the human rights violation that his country is experiencing in different international decision-making scenarios such as the European Parliament, the British Parliament, the German Parliament, Argentina congress and the United Nations.

He also stands out for his work against military spending. In 2021, Cardona supported by 33 Colombian congress members demanded the President of Colombia, Iván Duque, that one billion pesos be allocated from the defence sector to the health sector. He also requested the Government to refrain from purchasing 24 warplanes that would cost $4.5 million dollars. On May 4, 2021, amid violent protests unleashed in Colombia as a result of the proposal for a new tax reform. The Minister of Finance, José Manuel Restrepo, announced that the Government will comply with the request to refrain from purchasing the warplanes.

”We congratulate all our new Diana Award recipients from the UK and all over the globe who are changemakers for their generation. We know by receiving this honour they will inspire more young people to get involved in their communities and begin their own journey as active citizens. For over twenty years The Diana Award has valued and invested in young people encouraging them to continue to make positive change in their communities and lives of others” said Tessy Ojo, CEO of The Diana Award”

Due to the current situation, the award ceremony was held virtually on June 28, and it was there that it was announced that Angelo Cardona is the first Colombian to receive the prestigious award.