On Monday May 11, 2020 anti-war groups in Berlin held an event and vigil close to the entrance of the German Defense Ministry. Elsa Rassbach and the Berlin Peace Coordination organized the event.

Members of the Berlin chapter of World Beyond War participated in the event.

Parliamentarians from three different political parties spoke at the event.

The main TV-channel ZDF reported on the hearing that was held at the Ministry in Berlin.

The German Parliament is about to enter a decisive stage in the only public debate ever to be required by the ruling parties of a NATO-member state regarding whether to acquire lethal killer drones. Other NATO countries have blindly followed the U.S. and Israeli precedent without much public discussion.

This unique situation in Germany results in part from “the importance of international law that Germans came to recognize after the Nazis,” said Elsa Rassbach, of CODEPINK-GERMANY, in her May 4, 2020 interview on The Real News Network:

German reflection about their own nation’s criminal past, she says, has led to strong criticism of the U.S. government’s ruthless violation via its drone program of international and human rights law. Though the German military has tried for more than seven years to acquire armed drones, so far it has not been able to persuade a majority of the population or their representatives in the German Parliament to authorize the acquisition of armed drones.

On May 11, 2020, as Rassbach reports in the interview, the German Defense Ministry is moving during the coronavirus crisis to get around an agreement by parliamentarians to hold a “broad public debate” on the legality and ethics of the use of armed drones. The Ministry of Defense plans to hold its own hearing loaded with hand-picked witnesses in which attendance will be limited to selected parliamentarians and reporters. So far, no drone whistleblowers or victims of drone attacks have been invited to testify.

Taking advantage of the current lockdown due to COVID-19, during which large public protests are prohibited, the German Defense Ministry will likely promise the parliamentarians that it will never use killer drones for war crimes. And the Ministry will argue that the arming of German drones is essential for the “protection” of German soldiers on their supposed peacekeeping missions in Afghanistan and in Mali. The Ministry will thus attempt to achieve a consensus among the leaderships of a majority of the six parliamentary parties.

Whatever the Ministry of Defense promises now, it can make no promises regarding the use of drones by future German governments, which may include the right-wing populist forces that are on the rise throughout Europe. Peace activists and many parliamentarians believe it essential that Germany hold the line against acquiring killer drones.

WHAT YOU CAN DO.

During the COVID Lockdown, many house-bound Germans are writing letters to the parliamentarians, particularly to the members of the key committees for the decision about arming the drones. In addition, after receiving complaints about the exclusivity of the Ministry of Defense event on May 11th, the Ministry has opened up a parallel discussion on Twitter, and some killer-drone opponents are tweeting in English, German and other languages.

Elsa is asking us to watch her 17-minute Real News interview and then immediately tweet messages about why Germany should not arm drones.

Please also send emails (by not later than May 20th) to members of the German Parliament, particularly in the Defense and Budget committees, urging that Germany not arm its drones.  These emails can be of any length and give your personal reasons to oppose drone killing.  For an example of such a message, see the letter written in 2018 by Ed Kinane of Upstate Drone Action.

Elsa Rassbach  reports that many German parliamentarians are interested in what US-Americans have to say about drone warfare, and the letters have gotten attention.

Here you can find instructions how to contact the German parliamentarians.

Even the Federal Ministry of Defence reports on the protest on its webpage: 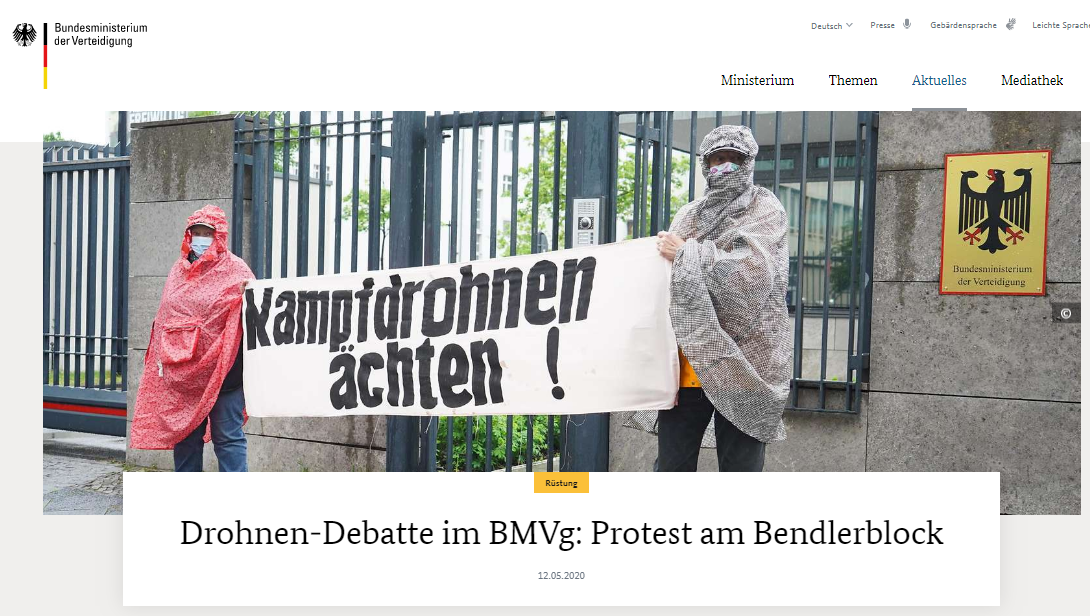