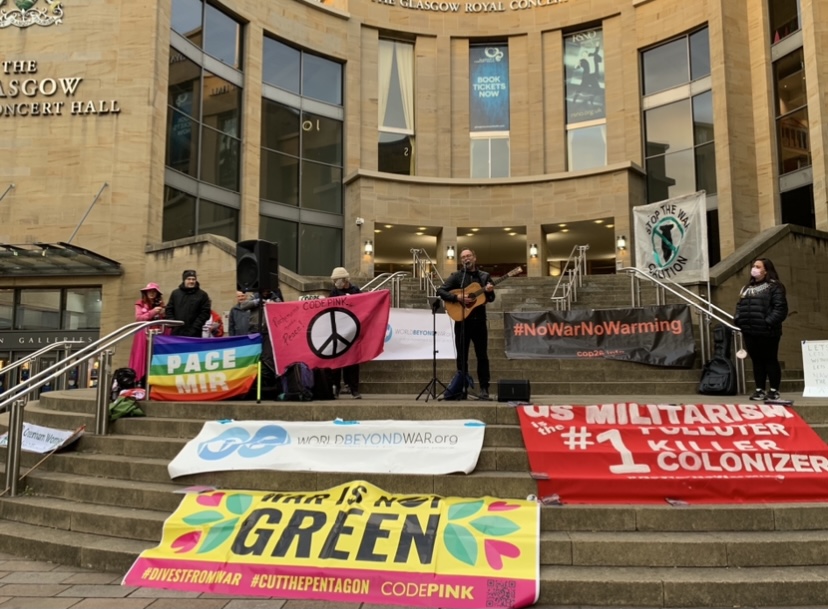 Carbon emissions from military operations are not currently included in climate agreements.

Fellow anti-militarist groups Stop the War Coalition, Veterans for Peace, World Beyond War and CODEPINK came together in an anti-war rally on the steps of the Glasgow Royal Concert Hall on 4 November, highlighting the links between militarism and the climate crisis.

The rally opened with the sound of a shell being blown by an activist who had travelled from the Mariana Islands in the western Pacific Ocean, who later spoke about the impact militarism has had on the environment in her country. In her speech, she described how one of the islands is used solely for military purposes, which has poisoned waters and threatened marine wildlife.

Tim Pluto of World Beyond War opened his speech by stating “war needs to be abolished to prevent climate collapse”. He urged spectators to sign the group’s petition to COP26 demanding that military emissions be included in climate agreements. The previous COP meeting in Paris left it at the discretion of each nation whether to include military emissions.

Stuart Parkinson of Scientists for Global Responsibility UK opened his speech with a question currently unanswerable, but on which he carries out research – how big is the global military carbon footprint? Parkinson’s research found that the UK’s military emissions total 11 million tons of carbon per year, the equivalent of six million cars. His research also found the US military carbon footprint to be twenty times the UK figure.

Further speeches came from Chris Nineham of the Stop the War Coalition, Jodie Evans of CODEPINK: Women for Peace, and Alison Lochhead of Greenham Women Everywhere, among others, and focused on the environmental effects experienced in war zones and the link between nuclear weapons and the climate crisis.

In the crowd of the rally was former leader of Scottish Labour Richard Leonard, who gave an interview to The Glasgow Guardian. “Those of us who are pursuing peace are also pursuing an end to the climate crisis, and the two things could be solved by an effort that brings the two strands together. Why do we waste money on a military-industrial complex when we could be building a green future in a peaceful world?”

Leonard told The Glasgow Guardian that the link between militarism and the environment should be on the table for discussion at COP26, because “it’s not just about looking at the climate in an isolated way, it’s also about looking at our future and the kind of world that we want, and in my view that should be a demilitarised future as well as a decarbonised future.”

The former Scottish Labour leader agreed with the event’s speakers that nuclear weapons should not be present in Scotland, nor anywhere else in the world, having been a member of the Campaign for Nuclear Disarmament (CND) for 30 years.

When asked by The Glasgow Guardian whether he then regrets the last UK Labour government’s expenditure on wars, Leonard replied that “my goal as somebody in the Labour party is to argue for peace and socialism.” He added that he hopes this weekend’s march against the climate crisis in Glasgow “will be the biggest since I and hundreds of thousands of other people marched in 2003 against the Labour government’s decision to invade Iraq, because I thought that was wrong.”

University of Glasgow lecturer in Politics, Michael Heaney, was one of the event’s organisers. “Military operations, particularly those of the United States, are major polluters, and they are excluded generally from climate agreements. This rally is asking COP to include military emissions in climate agreements” he told The Glasgow Guardian.

The soundtrack to the event was provided by David, who travelled from the US, playing songs criticising governments’ lack of action on the climate crisis and military interventionism, particularly that of his own country, on a guitar with the words “this machine kills fascists” penned onto the wood.