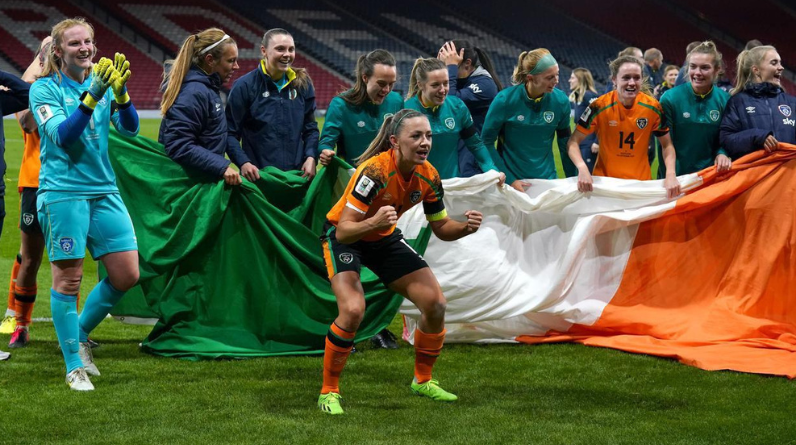 The Republic of Ireland women’s football team celebrate after their 1-0 victory over Scotland in the World Cop qualifier. Photo: Andrew Milligan/PA

I watched the Irish women’s World Cup qualifying play-off victory over Scotland on Tuesday night and was delighted with their success.

However, I was saddened to hear that a pro-IRA song was sung by a group of the young players in the dressing room after the match.

Some of them might not even appreciate the significance of the chant “Ooh, ah, up the ’Ra”, but that does not excuse their participation.

When Limerick won the All-Ireland hurling title in 2018, players and fans sang the IRA-associated song Seán South of Garryowen in the Croke Park dressing room and elsewhere.

The book Lost Lives by David McKittrick et al lists and tells a brief story about 3,600 of those who were killed in the campaign of violence in Northern Ireland.

We owe a debt of thanks to Ireland manager Vera Pauw, not only for the success of the Irish team but for her very detailed and heartfelt apology for this unacceptable insult to the victims of violence during this period.

Last August, Sinn Féin vice-president Michelle O’Neill responded to a question about IRA violence by saying: “I think at the time there was no alternative.”

In human interactions there are always peaceful alternatives to political violence.

There has never been a proper and genuine apology from the present-day Sinn Féin, or from its predecessors who went on to become Fine Gael and Fianna Fáil, for the unjustified violence that was perpetrated in the name of the Irish people.

If all the people of Ireland are to be genuinely and peacefully united, our leaders must not only apologise for past unjustified killings but also renounce such violence into the future.