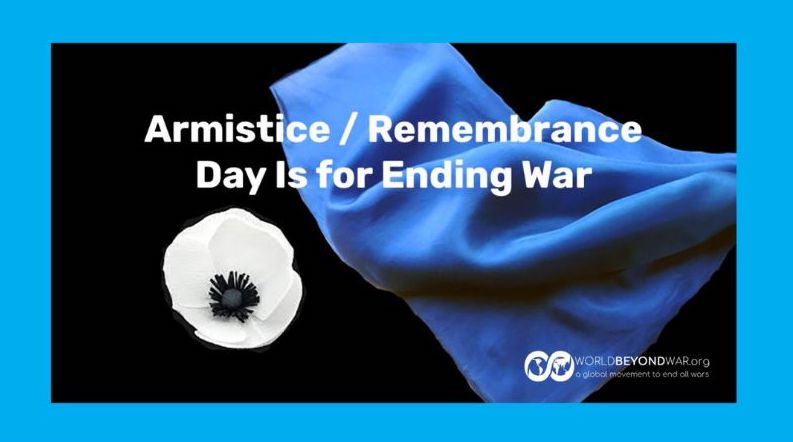 At the time of the Cuban Missile Crisis it was generally permissible in the United States to say you supported negotiations for peace and disarmament — I mean without declaring your hatred for China or liberals or black people. Had it not been so, we might not be here to talk about it.

But it was not so at the time of World War I. At that time, you could get locked in prison for peace talk. Had there been nuclear weapons at the time, we might not be here to talk about it.

It’s useful, after over a century of continuing to use war as the preferred means of ending war, to remember momentarily what The Great War was — that it was a whole new level of imbecilic horror, that it was a huge leap forward in the ability to kill, employed not only against — among others — “white” people, but also employed mostly from the ground — not yet from such a distance that those doing it could avoid seeing it.

Among the lovely biproducts of WWI (a deadly flu pandemic, the reborn KKK, prohibition, the European carving up of the Middle East for future wars, Nazism, the latest monstrous monument in 2022 in Washington DC) was the Armenian genocide, so labeled later because at the time of WWI a large portion of those killed in wars were still soldiers, whereas from WWII forward, with the majority of deaths usually being civilians, it was discovered that bad or genocidal killing could not be done from the air.

While no war would have been easier to avoid than WWII, it can’t even be imagined without WWI, the creation of which virtually nobody tries to justify. We are now in a moment in which it’s critical to remember that wars must be chosen, and that silencing antiwar voices is one way to choose them.

November 11, 2022, is Remembrance /Armistice Day 105 — which is 104 years since World War I was ended in Europe (while it continued for weeks in Africa) at the scheduled moment of 11 o’clock on the 11th day of the 11th month in 1918 (with an extra 11,000 people dead, wounded, or missing after the decision to end the war had been reached early in the morning — we might add “for no reason,” except that it would imply the rest of the war was for some reason).

In many parts of the world, principally but not exclusively in British Commonwealth nations, this day is called Remembrance Day and should be a day of mourning the dead and working to abolish war so as not to create any more war dead. But the day is being militarized, and a strange alchemy cooked up by the weapons companies is using the day to tell people that unless they support killing more men, women, and children in war they will dishonor those already killed.

For decades in the United States, as elsewhere, this day was called Armistice Day, and was identified as a holiday of peace, including by the U.S. government. It was a day of sad remembrance and joyful ending of war, and of a commitment to preventing war in the future. The holiday’s name was changed in the United States after the U.S. war on Korea to “Veterans Day,” a largely pro-war holiday on which some U.S. cities forbid Veterans For Peace groups from marching in their parades, because the day has become understood as a day to praise war — in contrast to how it began.

The 1920s was a climate of support for peace difficult to imagine now. That the human species could go through WWI and not abolish war and weapons perhaps tells you all anyone will ever have needed to know about humans. But while we’re still here, we should remember that it was a close call, that enormous efforts were in fact made to end all war, that the world in fact outlawed war, but that the weapons dealers won out in the end, the music and propaganda resurged, and — just as Biden was only barred from the presidency for a certain period of time after the war on Iraq — war promotion was only frowned on until memory of the Great War started to dim.

One means we have of restoring a bit of peace culture today is restoring formerly peace holidays. We should make Armistice / Remembrance Day a day to mourn all victims of war and advocate for the ending of all war. The story from the first Armistice Day of the last soldier killed in Europe in the last major war in the world in which most of the people killed were soldiers highlights the stupidity of war, and should always be remembered as well.

Henry Nicholas John Gunther had been born in Baltimore, Maryland, to parents who had immigrated from Germany. In September 1917 he had been drafted to help kill Germans. When he had written home from Europe to describe how horrible the war was and to encourage others to avoid being drafted, he had been demoted (and his letter censored). After that, he had told his buddies that he would prove himself. As the deadline of 11:00 a.m. approached on that final day in November, Henry got up, against orders, and bravely charged with his bayonet toward two German machine guns. The Germans were aware of the Armistice and tried to wave him off. He kept approaching and shooting. When he got close, a short burst of machine gun fire ended his life at 10:59 a.m. Henry was given his rank back, but not his life.

What would Henry have said afterwards, had he been capable? What will we say after a nuclear apocalypse if we are capable? “It was worth it, to stand up to Putin”? What would someone another century along think of that if they were capable of thinking about their own lack of existence?