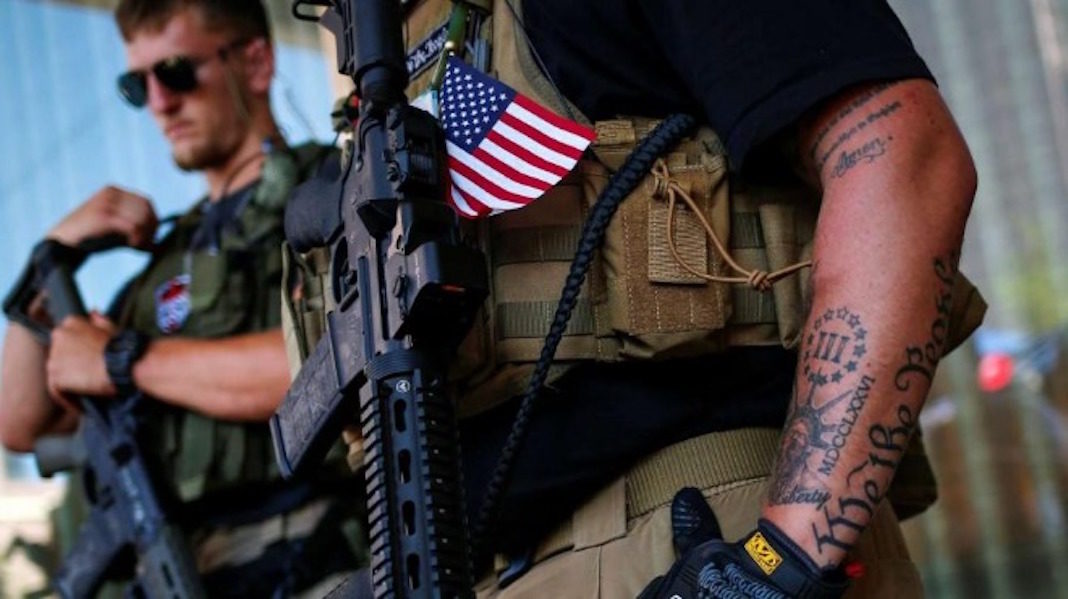 Air Force veteran Ashli Babbitt survived stints in Iraq and Afghanistan, where she helped guard military bases at the peak of America’s wars in those regions in the mid-to-late 2000s. Instead, she lost her life fighting her own government in the corridors of the U.S. Capitol on Jan. 6 — gunned down by a Capitol Police officer at the front of a crowd trying to smash toward the nearby House chamber and prevent the counting of 2020 Electoral College votes that would make Joe Biden president. Seconds before the fatal shot, a video captured her compatriots smashing a window and shouting, “We don’t want to hurt no one, we just want to go inside.”

Babbitt’s death came at the end of what her friends and family described as a descent into a rabbit hole of right-wing extremism and conspiracy theories that began not long after her 14 years of military service ended, while she struggled to make it as the small-business owner of a pool cleaning service, which a sign proclaimed as “a mask-free zone” in the time of coronavirus. On the last full day of her life, Babbitt wrote on Twitter in the apocalyptic language of the QAnon conspiracy theory that believes a “Deep State” sex-trafficking cabal has corrupted America, proclaiming: “Nothing will stop us. They can try and try and try but the storm is here and it is descending upon DC in less than 24 hours … dark to light!”

“My sister was 35 and served 14 years — to me that’s the majority of your conscious adult life,” Babbitt’s brother told the New York Times. “If you feel like you gave the majority of your life to your country and you’re not being listened to, that is a hard pill to swallow. That’s why she was upset.”

Babbitt was far from the only disillusioned U.S. military vet drawn to the insurrection at the Capitol. She was joined by the likes of a retired Air Force lieutenant colonel, Larry Randall Brock Jr., who’d served as a flight commander in Afghanistan and now was captured on video on the floor of the U.S. Senate in a combat helmet and full tactical gear, carrying zip-tie handcuffs. Like Babbitt, friends said they watched Brock become increasingly radicalized in his support of Donald Trump and his political movement. Family members told the New Yorker’s Ronan Farrow that the Air Force remained central to Brock’s identity and, as one said, “He used to tell me that I only saw the world in shades of gray, and that the world was black and white.”

One radical right-wing group with a heavy presence at the storming of the Capitol was the Oath Keepers, a group geared toward current and former members of both the military and domestic law enforcement that was founded by a former Army paratrooper named Stewart Rhodes around the time that Barack Obama was elected as America’s first Black president. Ahead of the insurrection, Rhodes told the Los Angeles Times these were “pissed-off patriots that are not going to accept their form of government being stolen.” In one of the more chilling videos from the Capitol, a line of a half-dozen Oath Keepers wearing combat gear marches toward the seat of U.S. government and through the chaotic mob with steady, military precision.

As the Justice Department and other investigators continue to sort out what really happened on that bloody Wednesday on Capitol Hill, it’s increasingly clear that military veterans were disproportionately involved. So far, about 20% of those arrested and charged in connection with the riot had served in the U.S. military, a group that comprises only 7% of the general population. To some experts, the arrests highlight a disturbing trend in American life that’s existed since the bitter end of the Vietnam War — a kind of “blowback” in which troops who were trained to fight and kill for one vision of democracy overseas turn on their own government in their disillusionment once back home.

“We see a spike in activity after every major war,” Kathleen Belew, the University of Wisconsin historian, told the New Yorker after Jan 6. In 2018, Belew’s book Bring the War Home drew a powerful line between the disenchantment of returning Vietnam vets and the rise of white-power movements during the 1980s. She said she saw the same phenomenon at work on Capitol Hill, where the about-to-be-slain Babbitt described her fellow rioters as “boots on the ground.” Said Belew: “I don’t think we have to look very far to see this as a ricochet of warfare.”

It’s important to note here that we are talking about a fraction of the 2.7 million service members who took part in Iraq or Afghanistan — a group that includes large numbers of veterans doing good things in their communities, even working in some cases to reduce the aggressive U.S. military posture they participated in. Indeed, the Capitol Police officer who was killed trying to hold off the mob, Brian Sicknick, had also served in the military overseas.

And America, as a society, frankly gives its former soldiers and sailors too many reasons to feel unwelcome or otherwise disconnected when they come home. Some of that is embedded in a lack of support, including the historically poor performance of the Veterans Administration that has festered under both Democratic and Republican administrations. But I also mean much more broadly that our country’s embrace of militarism as our face to the world — including the unending post-9/11 “forever war” — creates lifelong post-traumatic stress or other psychological wounds among the too many who fight it. Even veterans who don’t see frontline combat face a difficult adjustment from the camaraderie of their units to increasingly atomized, individualistic and harsh America that waits at home. For a minority, conspiracy theories or extremism can provide a new form of social cohesion, albeit a dangerous one.

There’s a simple way to curb some of the radicalism and disillusionment that’s caused by sending so many young men and women to fight a muddled “forever war” that continues after nearly 20 years, as our reasons for sending troops into dangerous situations in Afghanistan or Iraq become less and less clear, especially to those “boots on the ground.” Our new president, Joe Biden, could show a seriousness to finally ending these wars and creating an American foreign policy that doesn’t need to be enforced with constant drone strikes and an archipelago of military bases.

As I write this, the 46th president is enjoying the honeymoon of his first week in office and delighting most of the 82 million Americans who voted for him with a rash of executive actions that target almost every one of our national problems, from COVID-19 to climate change to discrimination against the LGBTQ community. The giant dog that isn’t barking here in the early days of the Biden administration is our national addiction to militarism. His busy schedule of executive orders has somehow ignored curbing the drone strikes that increased exponentially under Trump, or U.S. support for Saudi Arabia’s immoral war in Yemen, or really offering any sign that Biden plans to unwind the wars authorized way back in 2001, or undo America’s obscene spending on the military — more than the next 10 nations combined.

Indeed, the indications are that the magnetic inertia of American militarism will continue under Biden, as it does under every modern U.S. president — Republican or Democrat, conservative or liberal. After all, the Republicans and Democrats in Congress who barely speak to one another the other 364 days of the year managed to hold hands and sing “Kumbaya” in passing a massive $740 billion defense budget, even over Trump’s veto. While the incoming Biden team has signaled a policy shift on Yemen is coming soon, the future for American troop presence in the Middle East and Afghanistan is very much up in the air.

Biden’s best quality in a 50-year political career has been his ability to adapt to changing times. It’s still early enough in his presidency to hope that his team will make the connection between our bloated Pentagon spending and his ambitious domestic agenda that would tackle the coronavirus, climate change and economic inequality at the same time — but there’s even more at stake.

Once again, Jan. 6 “brought the war home” to America. We act shocked when a nation that too often executes its foreign policy at the barrel of a tank finds that here at home we’ve become not only armed to the teeth but that increasingly seems unable to solve what should be political debates without apocalyptic talk of a “civil war.” When it comes to drawing down the morally corrosive power of militarism on American life, the buck starts at the president’s Resolute Desk. President Biden has both the power and the opportunity to bring the longest military conflict in American history to its inevitable end — and build a society where there’s no longer any war to import.