​Billboard: 3% of U.S. Military Spending Could End Starvation on Earth 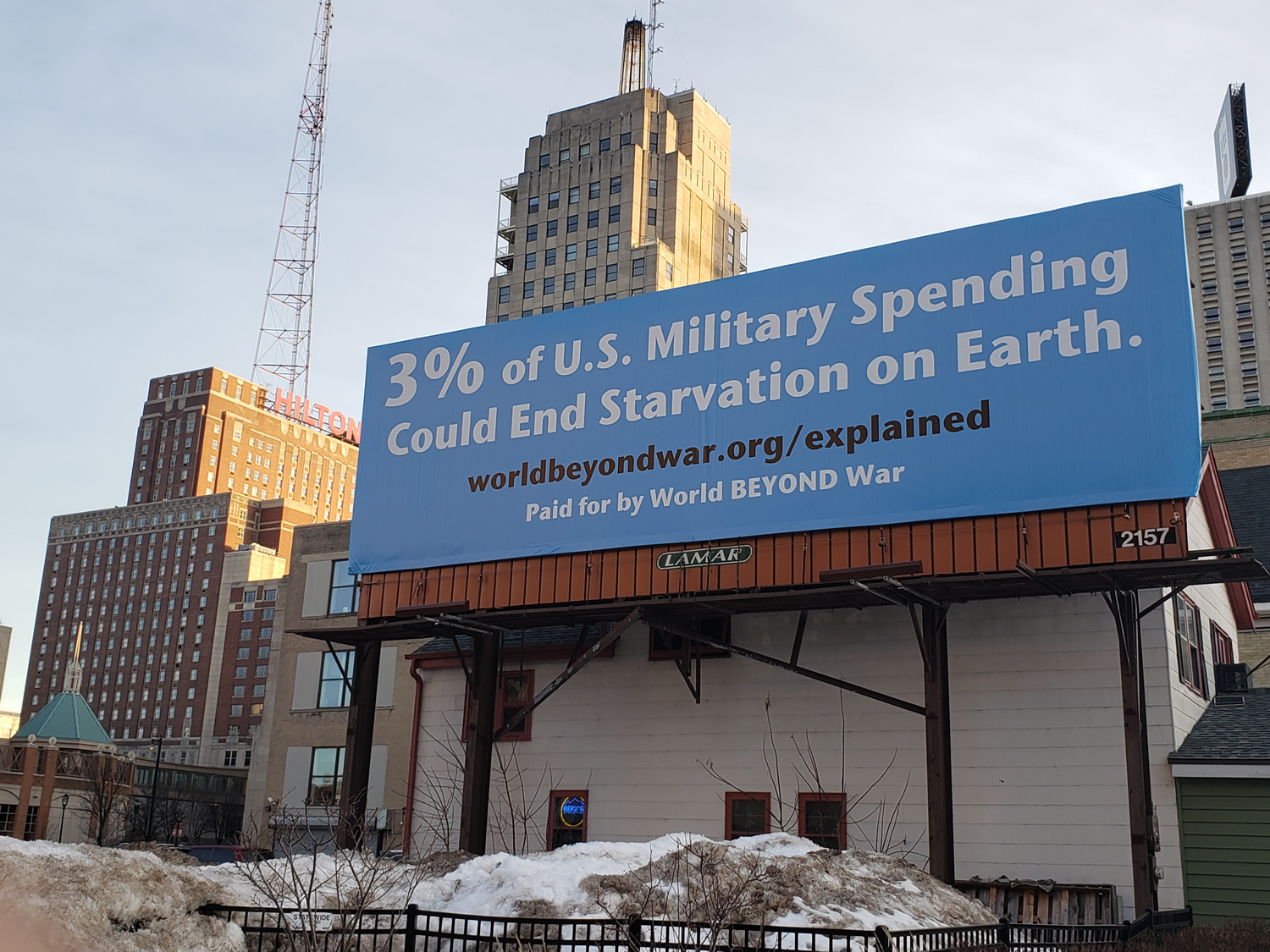 A billboard in Milwaukee, at the south-east corner of Wells and James Lovell (7th) Streets, across the street from the Milwaukee Public Museum through the month of February and again for the month of July when the Democratic National Convention is held nearby, reads:

“3% of U.S. Military Spending Could End Starvation on Earth”

Hardly. Milwaukeeans and others around the country with little money of their own to spare have been chipping in to put up billboards like this one in an effort to call attention to the biggest elephant in the American room — even if, in political mascot terms, it’s a hybrid elephant-donkey: the U.S. military budget.

Organizations that have contributed to this billboard include World BEYOND War, Milwaukee Veterans For Peace Chapter 102,  and Progressive Democrats of America.

Paul Moriarity, president of Milwaukee Veterans For Peace remarked: “As veterans, we know that endless wars and the Pentagon’s corporate handouts do nothing to make us safe. We waste hundreds of billions of dollars that would be better spent on pressing needs like education, health care, and averting catastrophic climate change. Educating and reminding people of the true costs of war is a primary mission of Veterans For Peace. We  are happy to be a partner in this effort by World BEYOND War.”

World BEYOND War has put up billboards in numerous cities. The organization’s Executive Director David Swanson said the approach has helped create conversations that otherwise don’t happen. “In the most recent presidential primary debate on CNN, as is typical,” he said, “the moderators asked the candidates what various projects would cost and how they would be paid for, but lost all interest in cost when it came to questions of war. The single biggest item in the federal discretionary budget, taking up over half of it alone, is perhaps the least-discussed item: military spending.”

Jim Carpenter, local contact for the Progressive Democrats of America, said he believes Senator Bernie Sanders is correct when he says we must “bring together the leaders of the major industrial nations with the goal of using the trillions of dollars our nations spend on misguided wars and weapons of mass destruction to instead work together internationally to combat our climate crises and take on the fossil fuel industry. We are uniquely positioned to lead the planet in a wholesale shift away from militarism.”

The Milwaukee County Board of Supervisors in 2019 passed a resolution that read in part:

“WHEREAS, according to the Political Economy Research Institute of the University of Massachusetts, Amherst, spending $1 billion on domestic priorities produces ‘substantially more jobs within the U.S. economy than would the same $1 billion spent on the military’; and

“End world hunger,” said Swanson, “is rightly only one small item in the list of what would be possible by redirecting a portion of destructive and counter-productive military spending. It would, however, constitute a major shift in foreign policy. Imagine what the world would think of the United States, if it were known as the country that ended world starvation. The decrease in hostility could be dramatic.”

World BEYOND War explains the 3 percent figure this way:

In 2008, the United Nations said that $30 billion per year could end hunger on earth, as reported in the New York Times, Los Angeles Times, and many other outlets. The Food and Agriculture Organization of the United Nations (UN FAO) tells us that number is still up to date. Thirty billion is only 2.4 percent of 1.25 trillion. So, 3 percent is a conservative estimate of what would be needed. As noted on the billboard, this is explained in some detail at worldbeyondwar.org/explained.