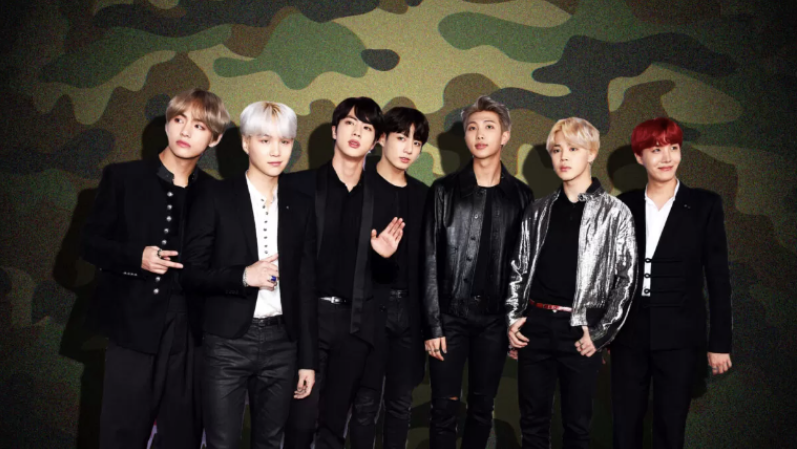 “What???!!! Noooo…….” my 14-year-old daughter first shrieked, then howled. Chimed in her equally shocked but more restrained galpal: “Wait, they can do that? How??”

These are indeed the questions to ask in response to the news I had broken to the shook teens: BTS, the South Korean K-pop boyband megastars who have sold more than 100 million records worldwide, are going on forced semi-hiatus until 2025, due to their country’s compulsory military service for males by the time they hit age 30.

“We have always been aware of the eventuality of mandatory military service, and we have long been making preparations to be ready for this moment,” CEO Jiwon Park of Hybe Corp., which owns BTS’s label Big Hit records, wrote in an appropriately super-corporate letter to shareholders. “In the short term, individual activities for several of the members are planned into the first half of 2023, and we have secured content in advance, which will enable BTS to continue their engagement with fans for the foreseeable future.”

Translation: They’ll be releasing solo records, staggering their various tours of duty; there’ll be some sporadic tour dates, and we swear it’ll be business as usual sooner than you think.

All pop music is youth music, all youth music—even manufactured boy-bandery!—is intrinsically transgressive and rebellious, and there is approximately zero rebelliousness in acceding to your government’s demand to do a record-scratch across your life and prepare for war.

“[Elvis Presley] died when he went in the army,” John Lennon once said about his biggest hero. “That’s when they killed him. The rest of it was just a living death.” Added Paul McCartney in the authorized biography Many Years from Now: “We liked Elvis’ freedom as a trucker, as a guy in jeans and swivelin’ hips….But [we] didn’t like him with the short haircut in the army calling everyone ‘sir.'”

Hard as it may be to imagine the counterfactual, the Beatles themselves were perilously close to having been squashed by military service before Beatlemania could take global flight. The U.K.’s mandatory 18-month military service for males between the ages of 17 and 21 ended only in 1960, when Lennon and Ringo Starr were 20, McCartney was 18, and George Harrison 17. Hard to mount a British Invasion with all the cultural footsoldiers uniformed in olive drab.

Mandatory military service has thankfully fallen out of favor in most of the free, rich world; the 60 or so countries that still require armed servitude to the state are largely impoverished authoritarians like Cuba, Turkmenistan, and Iran. Of the richer world exceptions, most live in a state of real or perceived existential threat on their borders—Israel, Estonia, Taiwan, Singapore, and South Korea.

Mysid – Own work based on: BlankMap-World.svg

Those fond of equality-of-immiseration arguments will surely cheer that the Bangtan Boys could not parlay their wealth and fame into an exemption from this nationwide requirement. Indeed, the country’s “entertainment soldier” semi-exemption was kiboshed in 2013 (ironically, the year BTS started) after outcry over fairness.

But that was some $30 billion in BTS-related economic activity ago (as estimated by the Hyundai Research Institute). According to Nikkei Asia, public opinion in South Korea is tilted squarely in favor of granting the group artistic exemptions and is already roiling domestic politics. And no wonder.

BTS, and K-pop writ large, demonstrated to Koreans that they could transcend the historically stifling limits of their country’s national borders and achieve worldwide success and adoration. The boys’ submission reinforces national solidarity in the face of an ongoing threat, yes. However, it’s also a reminder that this was an authoritarian country in living memory and that there is still a finite expanse of leash on any citizen’s ambitions.

The United States has no such excuse, even for the remnant of its long-shuttered military draft, the Orwellianly named “Selective Service” system of registering 18-year-old males today (and maybe females tomorrow!) for some theoretical future draft. The Selective Service should be ended, not expanded; at minimum, we need a complete and total shutdown of the Selective Service’s godawful Twitter feed:

Parents, if your son is an only son and the last male in your family to carry the family name, he is still required to register with SSS. Learn more about who needs to register at https://t.co/GYbRK99c09. pic.twitter.com/tzW6uKkyl5

I won’t recommend policy for South Korea, though it’s long since past time for our soldiers to leave Korean manpower defense for the Koreans. But Americans are supposed to be a free and self-respecting people organized around the noble and revolutionary idea that among our unalienable rights are life, liberty, and the pursuit of happiness. This is the liberty culture that brought the world Elvis, dammit; a pox on all governments who would attempt to clip his (or his successors’) mighty wings.