Can You Spot the Propaganda?

#3 How the media’s choice of sources
frames their narratives.

Noam Chomsky and Edward S. Herman’s propaganda model proposes that one of the filters that determine the type of news we receive is the media’s choice of sources and how it frames their narratives.  See this short article explaining framing theory.

The propaganda model predicts that sources who support an elite consensus would be treated with less skepticism that sources who oppose it.  Click the audio clip below.  Can you spot this bias in the  interview with the head of The White Helmets in Aleppo, Ammar al-Selmo,  following the destruction of a UN aid convoy?

NOTE: Though not available at the time listen to this leaked tape of John Kerry and an aide talking to Syrian Rebels.  How confident do they sound that they have evidence of who attacked the UN convoy?

The UN concluded the convoy was attacked by the Syrian Air force by mistake however others dispute that because the evidence came only from people under the control of rebel forces. 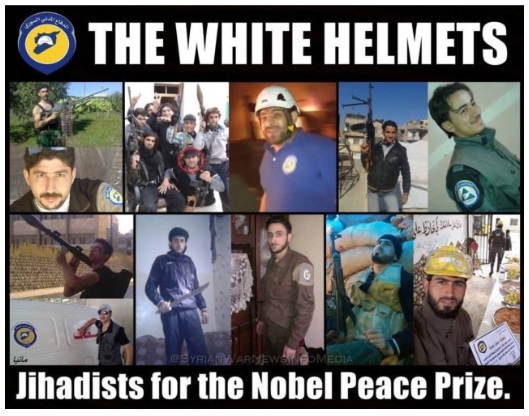 The next example of uncritical acceptance of Syrian Rebel sources is regarding the April 4, 2017 Chemical Attack. The first clip of the video in the CBC article shows victims being hosed off and the suspected munition and crater of the sarin gas attack.  Any suspicions?

Do you wonder if the White Helmets and the cameraman at the crater were wearing appropriate protective gear? Here is another picture released by the Rebels of men not wearing anything approaching sufficient protection from sarin hosing off victims and examining the crater.

Did the CBC do any critical investigation of the doctor narrating this video clip?

A google search should have aroused suspicions?

Anyone who has listened to As It Happens regularly might find the funniest and most ironic thing is not that US intelligence sources or Syrian Rebels are considered reliable sources, but that, for the purposes of this interview, Carol Off considers “Mr. Trump” to be unquestionably a reliable source .

This is the third article in the series, “Can You Spot the Propaganda?” Previous articles in this series: