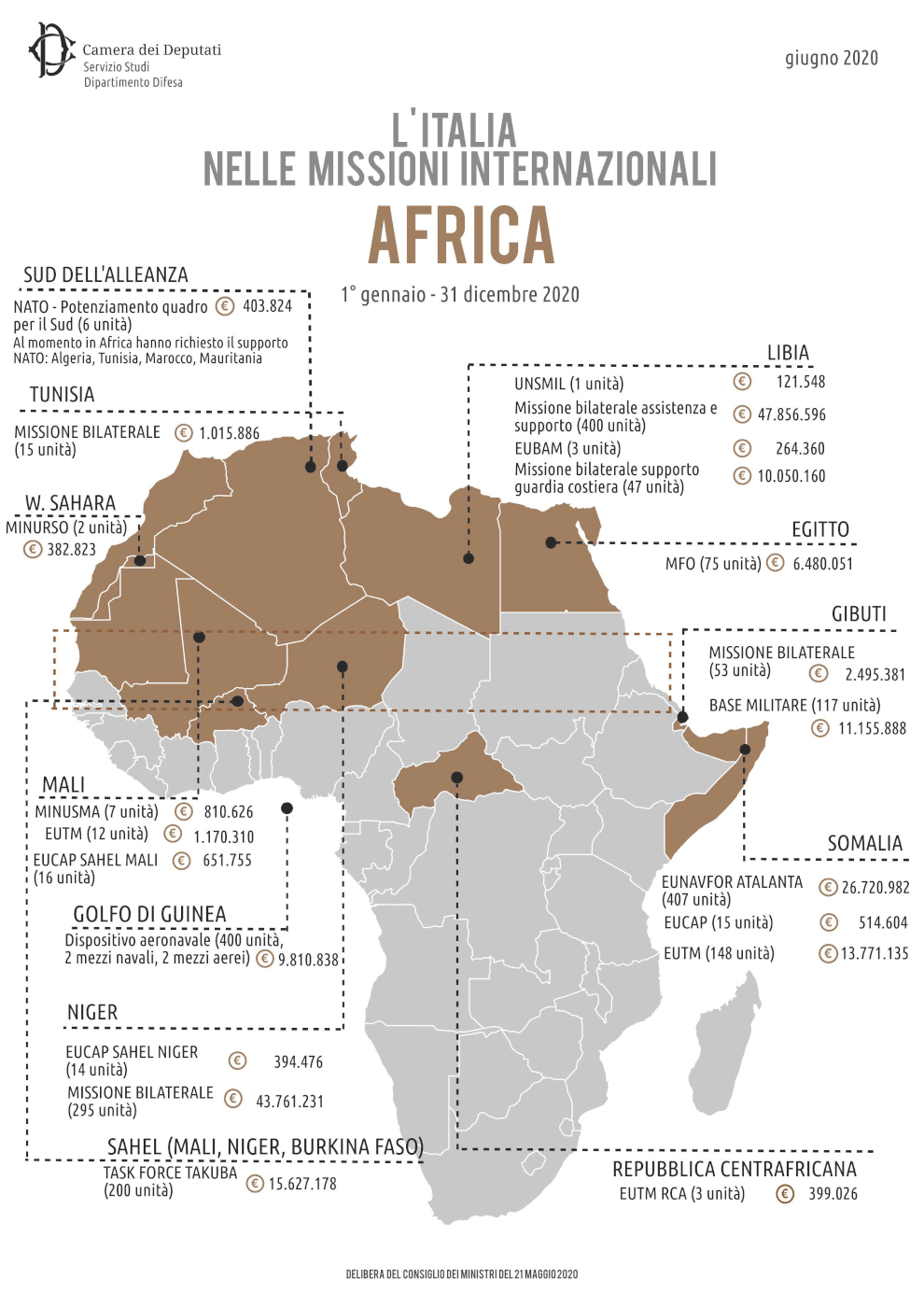 Italian Defense Minister Lorenzo Guerini (Democratic Party) expressed great satisfaction with the “cohesive” vote of the Parliament on international missions. The majority and the opposition approved 40 Italian military missions in Europe, Africa, the Middle East and Asia in compact form, there were no votes against and few abstentions except some dissent in support of the Tripoli Coast Guard.

The main “peacekeeping missions,” that have been underway for decades in the wake of the US / NATO wars (in which Italy participated) in the Balkans, Afghanistan and Libya, and the Israeli war in Lebanon that are part of the same strategy, have been extended.

New ones were added to these missions: the European Union military operation in the Mediterranean, formally to “prevent arms trafficking in Libya;” the European Union Mission to “support the security apparatus in Iraq;” the NATO Mission to strengthen support for countries located on the Alliance South Front.

The Italian military commitment in sub-Saharan Africa is greatly increased. Italian special forces participate in the Takuba Task Force, deployed in Mali under French command. They also operate in Niger, Chad and Burkina Faso, as part of the Barkhane operation involving 4,500 French soldiers, with armored vehicles and bombers, officially only against jihadist militias.

Italy is also participating in the European Union Mission, EUTM, which provides military training and “advice” to the armed forces of Mali, and other neighboring countries.

In Niger, Italy has its own bilateral mission to support the armed forces and, at the same time participates in the mission of the European Union, Eucap Sahel Niger, in a geographical area that also includes Nigeria, Mali, Mauritania, Chad, Burkina Faso and Benin.

The Italian Parliament also approved the use of “a national air and naval task force for presence, surveillance and security activities in the Guinea Gulf.” The stated aim is “to protect national strategic interests in this area (read Eni’s interests), by supporting the national merchant ship in transit.”

It is no coincidence that the African areas, in which the “peacekeeping missions” are concentrated, are the richest in strategic raw materials – oil, natural gas, uranium, coltan, gold, diamonds, manganese, phosphates and others – exploited by American and European multinationals. However, their oligopoly is now endangered by China’s growing economic presence.

The United States and the European powers, failing to counter it only through economic means, and at the same time seeing their influence diminish within African countries, resorted to the old but still effective colonial strategy: to guarantee their economic interests by military means, including support for local elites who base their power on the military.

The contrast to jihadist militias, the official motivation for operations such as that of the Task Force Takuba, is the smoke screen behind which the real strategic purposes are hidden.

The Italian government declared that international missions serve to “guarantee peace and security of these areas, for the protection and safeguarding of populations.” In reality, military interventions expose populations to further risks and, by strengthening the mechanisms of exploitation, they aggravate their impoverishment, with a consequent increase in migratory flows to Europe.

Italy directly spends over a billion euros a year, provided (with public money) not only by the Ministry of Defense, but also by the Ministries of Interior, Economy and Finance, and the Prime Minister to keep thousands of men and vehicles engaged in military missions. However, this sum is only the tip of the iceberg of the growing military expenditure (over 25 billion a year), due to the adjustment of entire Armed Forces to this strategy. Approved by the Parliament with unanimous bipartisan consent.