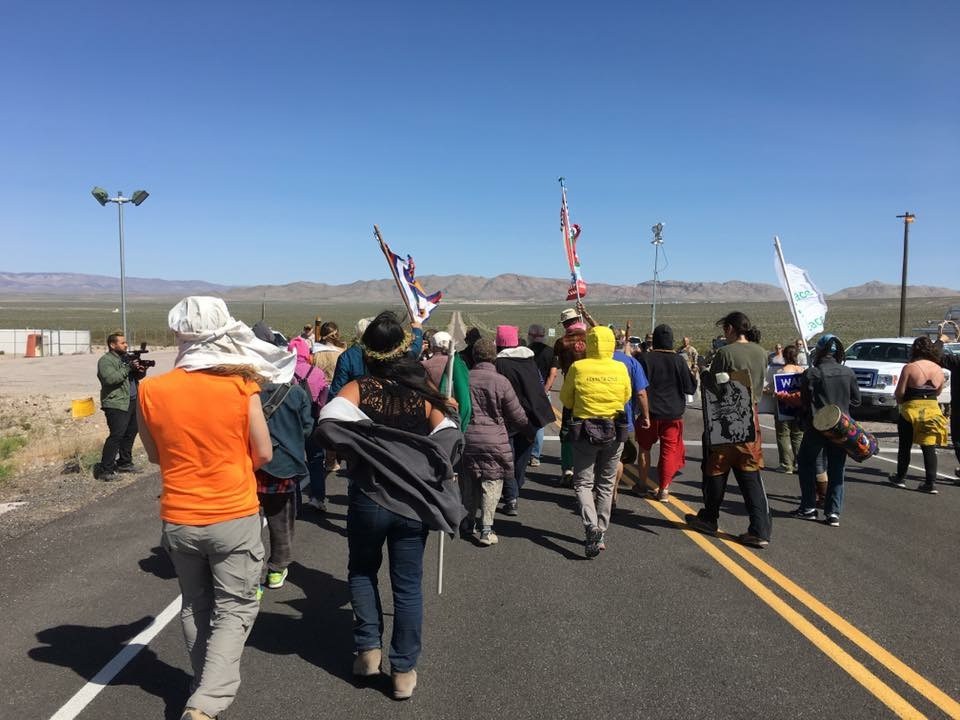 From War Is A Crime

From 1986 through 1994, two years after the United States put a hold on full-scale nuclear weapons testing, 536 anti-nuclear peace demonstrations were held at the site. Many thousands participated and according to government records, 15,740 arrests were made, but starting in 1987, the Sheriff’s Department, motivated in part by the expense of so many prosecutions on a rural county, stopped charging protestors who entered the site with criminal trespass. Activists who crossed the cattleguard at the fence-line three miles from the secured zone, now represented by an arbitrary white line closer to US Highway 95, were detained briefly in an open air corral and issued a misdemeanor “Notice to Appear” citation with no appearance date filled in. They were informed that no charge would be filed. Detainees who had no identification, who refused to identify themselves or even offered frivolous names were also released, as were those who presented permits to enter Western Shoshone land issued by their National Council. 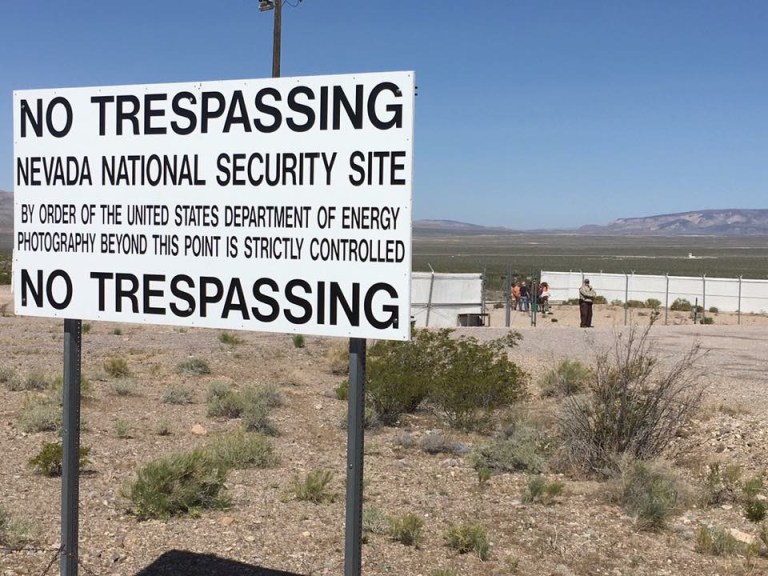 In August, 2018, a representative of the Sheriff’s Department informed the Nevada Desert Experience, NDE, of the change in policy. From now on, protesters who enter the site and can present government issued ID will be given a warning ticket the first time and issued real citations if they repeat. Those who are apprehended without ID will be arrested, transported to jail in Pahrump and charged as trespassers. Permits issued by the National Council of the Western Shoshone will no longer be honored. This crackdown is due, according to the deputy who spoke to NDE members, to pressure from the National Nuclear Security Administration of the US Department of Energy that operates the site.

With diminished numbers but with faithful regularity, NDE has continued its vigils, prayers and protests at the Test Site several times each year, usually with some of us detained by the deputies and released after presenting permits from the Western Shoshone. Our annual fall event, “Justice for Our Desert”, includes a prayerful procession into the site and this time, three members of the NDE governing council were taken into custody. Two of us, Mark Kelso of Las Vegas and me, from Maloy, Iowa, were released with warnings after we presented our driver’s licenses. Marcus Page-Collonge of Calaveras County, California, was taken to jail in Pahrump and was bailed out that evening.

A few days later, on October 11, the Nye County District Attorney filed a complaint against Marcus in Beatty Township Justice Court that charges that “The Defendant did willfully and unlawfully go on to the property of Nevada National Security Site after being warned no to do so” and trial for his alleged crime is set for December 3.

At trial, the State of Nevada will need to prove that the property Marcus went on to is that “of Nevada National Security Site,” an allegation that will not be verified easily. In 1950, Test Site was established on land legally recognized by the Treaty of Ruby Valley in 1863 as belonging to the Western Shoshone indigenous nation. This agreement allows the US government the “right to traverse the area, maintain existing telegraph and stage lines, construct one railroad and engage in specified economic activities. The agreement allows the US president to designate reservations, but does not tie this to land cessions.” The NNSS posts billboard sized “NO TRESPASSING” signs claiming the land as theirs, but the Western Shoshone have never ceded their sacred land to the government. By any measure, the land is theirs and it is the NNSS who is the trespasser, not Marcus nor any of the thousands of activists arrested there in the past.

The NNSS is not only occupying land that is not theirs, it is operating a criminal enterprise there. Nye County authorities could use their time more productively addressing these crimes against humanity than harassing law abiding protesters. This site is the place on the planet that has suffered more atomic blasts than any other and so will be poisoned for countless centuries, even if Yucca Mountain (at the western edge of the NNSS) does not finally become the repository for all nuclear reactor waste. While there have been no actual detonations there since 1992, there are still “subcritical” tests done and there is still testing done to determine the viability of the United States’ aging nuclear arsenal. Plans also still exist to resume testing at Area 5 of the NNSS, should any US President order such. The NNSS is operated not only in violation of the Treaty of Ruby Valley but against the United Nations Charter and other international agreements that according to the US Constitution are supreme law of the land. The treaty on the prohibition of nuclear weapons adopted by the United Nations last year makes it a crime to “develop, test, produce, acquire, possess, stockpile, use or threaten to use nuclear weapons.”

If on December 3, Judge Gus Sullivan of the Beatty Township Justice Court rules according the law he is sworn to uphold, Marcus will be found not guilty of trespassing and the District Attorney will be admonished never to file such obviously frivolous charges in that court again. Justice, however, is rarely seen in our courts and this reasonable outcome is not expected, at least not the first time such a case is heard there in more than 30 years. But, what if in the coming months, dozens, hundreds, even thousands show up at the Test Site as in the past, packing the Beatty Township Justice Court, and the Nye County Jail while we are at it? As Marcus tells us, “All humans in Nevada and Shoshone territory who care about the future of life on earth are responsible to reverse the momentum of nuclear weapons, waste, mining and milling, to end the nuclear violence represented here at the NNSS!”

A modest proposal: We invite all friends and fellow travelers to join all or part of NDE’s annual Sacred Peace Walk, April 13-19, this coming year, walking 60 miles from Las Vegas, past the killer drone center at Creech Air Force base to the historic Peace Camp, ending on Good Friday at the gates of the Nevada National Security Site. Then, with the largest number of resisters we can raise and with the permission of the Western Shoshone National Council, we enter their sacred land together!

While this “arrest” will no longer be the ritual without consequences that it has been, even in the new regime each one should be able to calculate the risk each is ready and able to take. First, anyone can participate in a meaningful way without crossing the line, each person adding to the strength of the whole action with no risk of arrest. Second, anyone entering the site with a Western Shoshone permit AND a photo ID such as a driver’s license, who has not already been issued a warning (that’s only me and Mark Kelso so far) will likely be processed quickly and released with a warning. Third, anyone entering with the Western Shoshone permit as their only ID should expect a ride to Pahrump and booked into the jail there. Marcus was held on $500 bond, but who knows what they will do if there is a crowd of us? Going bail or not may be another option for each to consider. If we are held over, it is likely that a judge will let us out on Monday, either with time served or with a trial in the near future.

“Filling the Jails” is a time honored American tradition that has been an integral part of every successful movement for social progress and the stakes have never been higher. Thirty years ago, overwhelming numbers helped end prosecutions of protesters at the Test Site and contributed to implementing the global ban on full-scale testing of nuclear weapons. What we demand now is so much more than this. There are no promises of outcome beyond educated guesses in this proposal. It would be a step in faith, but one that these dangerous times demand of at least some of us and the more who show up, the more fun it will be!

Long time protester and prophet Phil Berrigan could have been speaking to our present dilemma when he offered that, “In this morally polluted atmosphere, we believe that imprisonment could hardly be more to the point. We shudder under the blows of a society permanently mobilized against peace. Duplicity, propaganda, media indifference, institutional betrayal mark our plight. Our people are confused and hopeless. Let us not give up. Let us continue to nourish each other by consistent and prayerful presence at military installations, in courts and lock ups. Indeed, we need to be free enough to go to jail. We need to fill up the jails. Nonviolent revolution will come out of the wilderness, as it always has. And be assured, dear friends, one formidable wilderness today is the American prison.”

Nevada Desert Experience is a faith based movement and the Sacred Peace Walk embraces the witness and worship of many traditions and of those who identify themselves with none. Walk and camp with us through the desert for the week or join us on Good Friday morning for a communal act of nonviolent resistance. For those who can, come prepared for a joyous weekend together in jail and a strong rebuke to oppressive power in court, if that’s how it goes. Contact us at info@nevadadesertexperience.org, or phone (702)646-4814, the same number you might need to call from inside the Nye County Jail, where only collect calls are allowed!