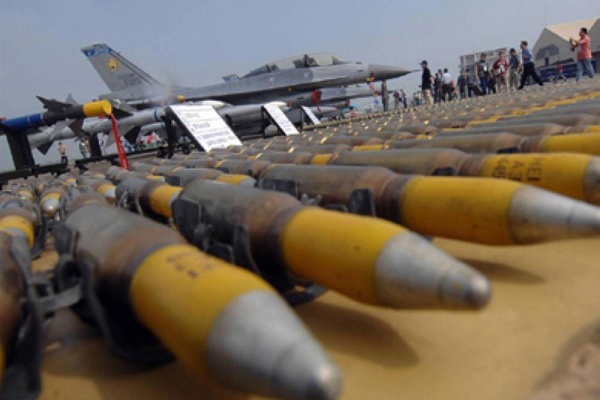 So why has the United States, democracy’s alleged leader, become the world’s largest weapons exporter?

In 2016, U.S. government arms exports totaled $38 billion, more than a third of the $100 billion global arms trade. That includes only government-to-government foreign military sales, approved by the Defense Department. It doesn’t include the billions sold in direct commercial sales in which Lockheed Martin, Boeing, General Dynamics and other weapons firms receive State Department licenses to sell directly to foreign governments.

But the arms industry is deeply mired in the business of forever silencing opponents.

Some will protest: U.S. weapons safeguard innocent people from tyrannical aggressors. Oh, really? Where are the surveys of conflict participants to evaluate that fairytale assumption? Where are the social impact statements of arms exports? How many killed by U.S. arms deserved death?

What’s the use of all that science in developing weapons if there’s no science in evaluating the application of weapons to real world problems?

If we’re taking it on faith that weapons promote better societies, if we’re not interviewing communities affected by weapons, if we’re not comparing the benefit of $1 billion toward the arms industry or toward non-violent conflict resolution, then paying taxes to fund weapons manufacturing is equivalent to paying taxes to support a religion.

Yet nearly every U.S. president since the 1969 Nixon Doctrine has been a salesman for the arms industry, deregulating it, increasing public subsidies to it, receiving campaign contributions from it, and swamping at least 100 nations with its lethal products.

No matter who we elect, arms exports and foreign policy are propelled by the Iron Triangle — the collusion of those in government, military, and the arms industry obsessed with expanding weapons markets and installing threat-based “peace.”

Instead of resolving conflict, weapons dealers thrive within it, like parasites infesting a wound. As William Hartung describes in “Prophets of War,” Lockheed Martin has lobbied to drive foreign policy towards company goals of increasing foreign exports by 25 percent.

Lockheed pushed for NATO expansion to Russia’s doorstep to make billion dollar weapons deals with new members. The Project for the New American Century, an influential “think tank” with a Lockheed Martin executive as director, pushed to invade Iraq.

The arms industry baits support by spreading weapons contract jobs across congressional districts. Jobs evidently make the killing worthwhile. Bear in mind that 70 percent to 80 percent of U.S. weapons corporations’ revenues comes from the U.S. government. If we’re using taxes to fund jobs, why not jobs to fight forest fires? To go solar?

Pouring subsidies into the arms industry strangles civilian manufacturing and innovation. Your students dream of becoming scientists? Prepare them for the military straitjacket. It won’t be easy getting funding without it. The majority of federal research and development funding goes to military-related activities.

Making the deal for U.S. taxpayers even worse are the industry’s campaign contributions, CEO salaries, environmental pollutants, massive bribes to foreign officials, and lobbying expenditures — $74 million in 2015. Unbelievably, our taxes even fund foreign purchasing of U.S. weapons — $6.04 billion in 2017.

Who listens to parents of Mexican students murdered by Mexico’s army? They say U.S. weapons sold to Mexico are more destructive than Mexican drugs sold to Americans. How will Trump’s wall protect Mexicans from Weapons Pusher Number One?

The arms industry gets free handouts with no democratic input, no evaluation, no responsibility for consequences, and no expectations that weapons will solve causes of conflict. In terms of hitting the targets of social, political, economic, and environmental progress, weapons shoot nothing but blanks.

Like every organ in the body, the arms industry is valuable, but when its compulsive mission of self-aggrandizement displaces the body’s mission, deprives other organs of nutrients, and poisons the body, it’s time for surgery and healing.

Kristin Christman has degrees in Russian and public administration from Dartmouth, Brown, and SUNY Albany.