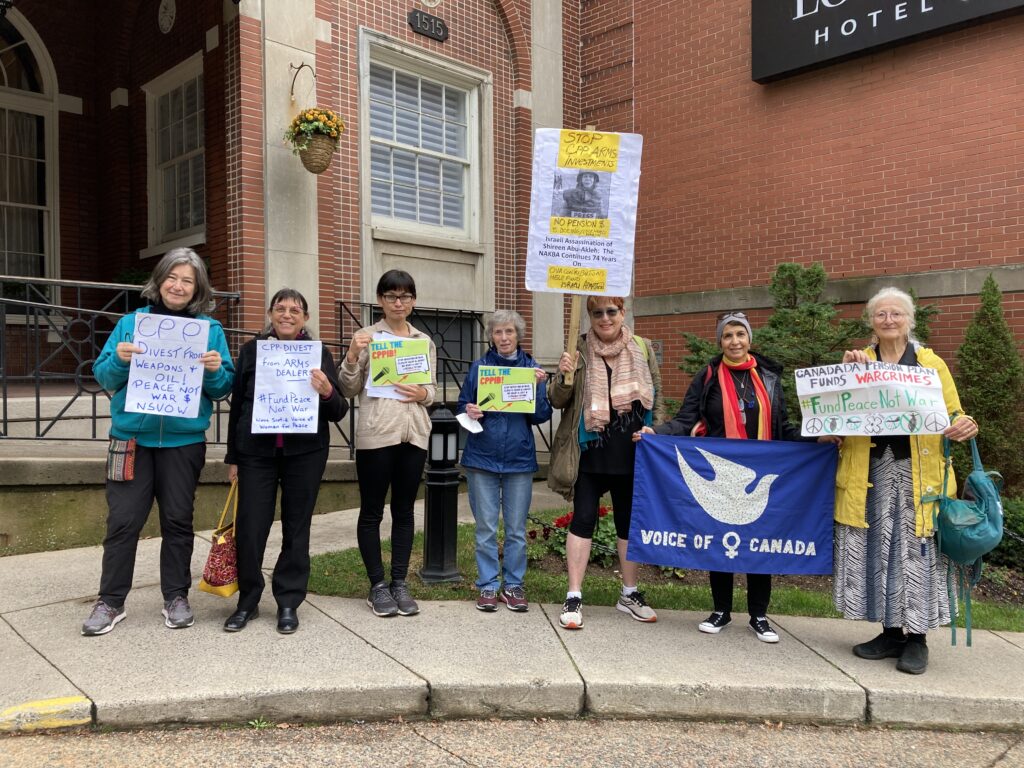 From October 4th to November 1st, 2022, dozens of activists showed up at the Canada Pension Plan Investment Board’s (CPPIB) biannual public meetings. Attendees in Vancouver, Regina, Winnipeg, London, Halifax, and St. John demanded that the Canada Pension Plan, which manages $539 billion on behalf of over 21 million working and retired Canadians, divest from war profiteers, oppressive regimes, and climate destroyers, and re-invest in a better world instead. Despite the fact that these concerns with CPP investments dominated the meetings, attendees received little to no feedback from CPP board members in response to their requests.

The CPPIB continues to invest billions of Canadian retirement dollars in fossil fuel infrastructure and companies fueling the climate crisis. The CPPIB has $21.72 billion invested in fossil fuel producers alone and over $870 million in global weapons dealers. This includes $76 million invested in Lockheed Martin, $38 million in Northrop Grumman, and $70 million in Boeing. As of March 31, 2022, the CPPIB had $524M (up from $513M in 2021) invested in 11 of the 112 companies listed in the UN Database as complicit with violations of international law in illegal settlements on Palestinian land with over seven percent of the total CPPIB investment being in companies complicit with Israeli war crimes.

While the CPPIB claims to be dedicated to “the best interests of CPP contributors and beneficiaries,” in reality it is extremely disconnected from the public and operates as a professional investment organisation with a commercial, investment-only mandate. Despite years of petitions, actions, and public presence at the CPPIB’s biannual public meetings, there has been a serious lack of meaningful progress to transition towards investments that better the world rather than contributing towards its destruction.

Just Peace Advocates and World BEYOND War put out a joint press release at the end of October regarding the activism at CPP public meetings throughout the month and in anticipation of the November 1st virtual, national meeting. Both organisations distributed the release to hundreds of media contacts.

*Bolded cities were attended by at least one affiliated activist.

The British Columbia meeting was held in Vancouver on October 4th.

In Vancouver, the first location of the tour, the point was raised that Canadians are very concerned that the pension fund is not being invested ethically. “Surely, the CPPIB is able to achieve a good fiscal return without having to invest in companies which fund a genocidal, illegal occupation of Palestine,” said Kathy Copps, a retired teacher and member of BDS Vancouver Coast Salish Territories. “It is shameful that the CPPIB only values protecting our investments and ignores the terrible impact we are having around the globe,” continued Copps. “When will you respond to the March 2021 letter signed by over 70 organisations and 5,600 individuals urging the CPPIB to divest from companies listed in the UN database as complicit in Israeli war crimes?”

The Ontario meeting was held in London on October 6th with David Heap from People for Peace London attending.

There were several questions from attendees regarding climate change & investments, and a long, 2-part question about China from a Uyghur-Canadian. CPPIB personnel stated that “walking away” from an investment provides “only a fleeting feel-good minute”. Further, CPPIB personnel stated that they already “screen out” companies that produce cluster munitions and land-mines.

Less than thirty people attended the Saskatchewan meeting in Regina on October 12th.

Jeffrey Hodgson and Mary Sullivan were present from CPPIB. After activists asked questions regarding unethical investments, several unaffiliated attendees expressed their support for the activists. Activists in attendance, including Ed Lehman from the Regina Peace Council and Renee Nunan-Rappard from Human Rights for All,  asked about infrastructure, fighter jets, and Lockheed Martin. Further, they also asked about green energy, carbon emissions, and the ethics of profiting from wars.

After the meeting, some activists and attendees discussed WSP, a Canadian company that makes up a large majority of the Canadian portfolio and which has been included in a recent submission to the UN to be considered for the UN database on companies complicit in human rights violations given its involvement in the East Jerusalem Light Rail project, with CPPIB personnel after the meeting. The personnel started talking about risk taking/management (risk of losing money), stating “we don’t divest, we sell.” They justified their actions by saying they put it in a balanced fund. When asked if they were invested in Russia, they were very clear to say no. 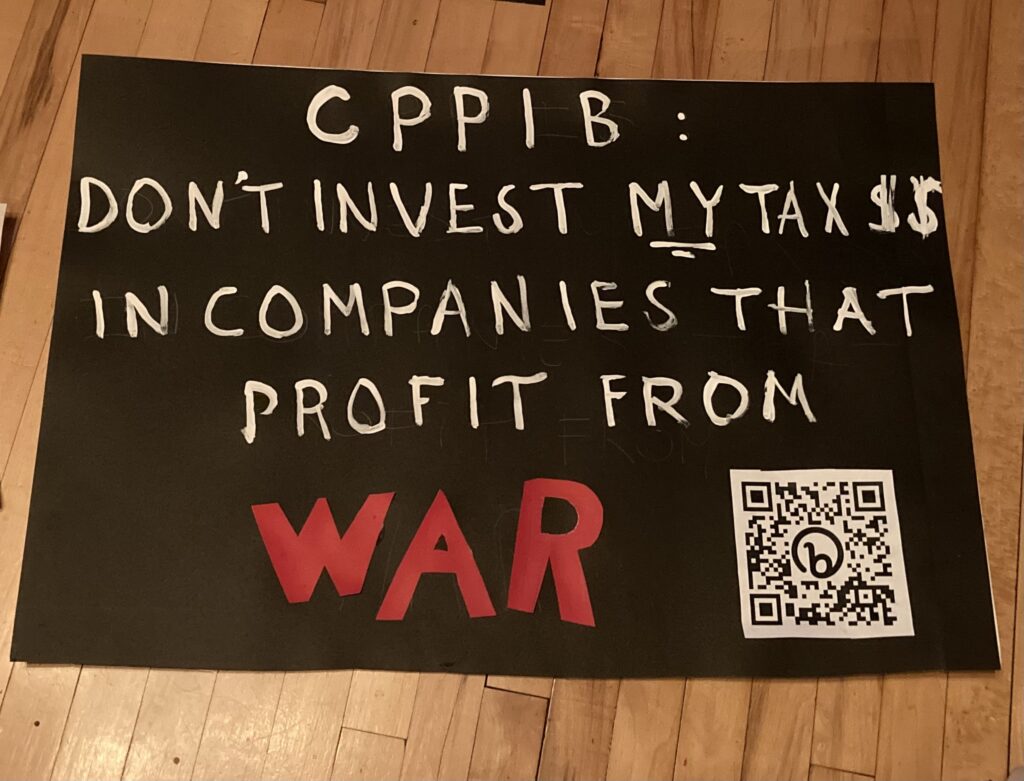 The Manitoba meeting was held in Winnipeg on October 13th with Peace Alliance Winnipeg (PAW) attending. CPP representatives in this meeting said they were aware of the circumstances around human rights violations in countries like China and added that geopolitical risk is a ”huge area” of engagement for the CPPIB.

A question was asked about the recent Amnesty International and Human Rights Watch reports that labelled Israel’s treatment of Palestinians as “apartheid”. This question was posed specifically in regards to CPP investments in WSP, which has offices in Winnipeg. Tara Perkins, a CPP representative, said she had previously heard concerns about WSP and added that CPPIB does follow a “robust” process when it invests. She did encourage the attendee to email her going forward with concerns about WSP. Note that thousands of letters in this regard have been sent in the last two years, with 500+ in the last month.

The Nova Scotia Meeting was held in Halifax on October 24th.

Several members of Voice of Women for Peace and Independent Jewish Voices attended as activist attendees in Halifax. Several activists also protested outside of the public meeting. From the outset, the CPP indicated that they were against divestment as an investment strategy if they objected to a company’s behaviour. Instead, they wanted to actively engage companies with whom they wanted to change. They insisted that companies that were involved in human rights abuses were not profitable in the long term, thereby relinquishing them of the duty to put anything in place to address human rights abuses.

The Newfoundland meeting was held in St. John’s on October 25th.

Four members of Solidarity with Palestine – St. John’s attended the CPPIB meeting in St. John’s conducted a 30 minute protest outside prior to the meeting. One question asked by activist attendees was: How did CPPIB eliminate externalities such as war, climate change and human rights from their investment portfolio? Michel Leduc indicated that the CPPIB was 100% compliant with international law [overlooking investments in the occupied Palestinian territories].The second question from an activist attendee was: How did investments in apartheid Israel, specifically Bank Hapoalin and Bank Leumi Le-Israel, get through their recent Environmental, Social, and Governance [ESG] analysis since both banks are on the United Nations blacklist as to being complicit with the Zionist settlements in occupied Palestine? 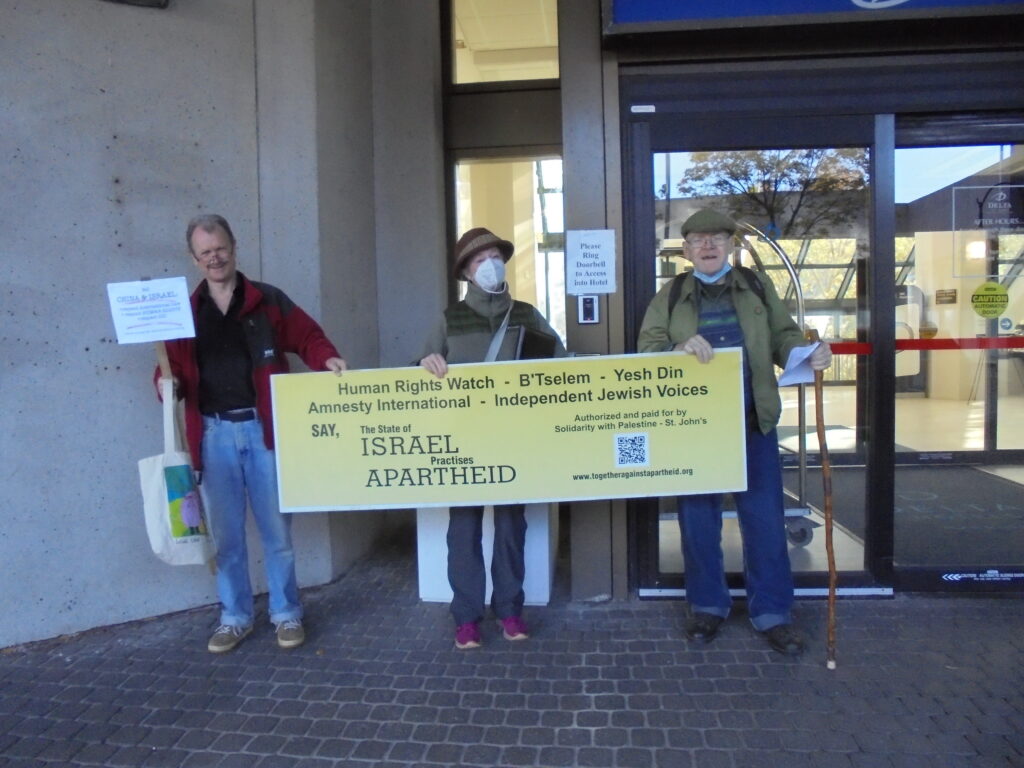 The National Meeting was held online on November 1st, 2022.

During the virtual meeting, CPPIB personnel answered a question about investments in Russia, confirming they have not had investments in Russia over the last ten years. They did not answer directly about China investments and questions about war manufacturers and the UN databases and other companies complicit in Israeli war crimes.

Organisers were pleased to have had a strong presence at over half of the CPPIB public meetings in 2022. Despite years of petitions, actions, and public presence at the CPPIB’s bi-annual public meetings, there has been a serious lack of meaningful progress to transition towards investments that invest in the best long-term interests by bettering the world rather than contributing towards its destruction. We call on others to pressure the CPP to invest responsibility in a better world for all. Follow Just Peace Advocates, World BEYOND War, Mining Injustice Solidarity Network, Canadian BDS Coalition, MiningWatch Canada, and Canadian Foreign Policy Institute to stay in the loop for future action opportunities regarding CPP divestment.

For more information about the CPPIB and its investments, check out this webinar.