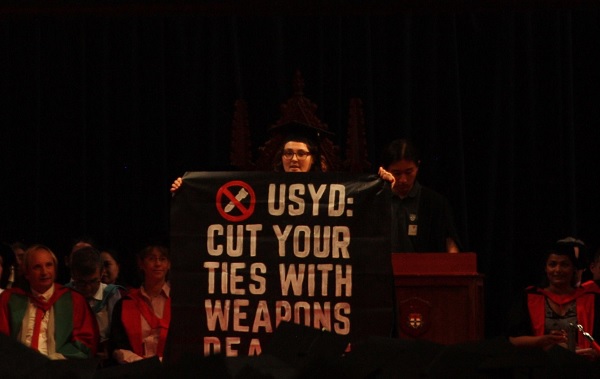 A University Medal recipient has disrupted their graduation ceremony today by dropping a banner calling on the University of Sydney to cut their connections with weapons manufacturing companies.

“I’m ashamed to be graduating from a university who are trying to profit off drone warfare and nuclear weapons,” said Science graduate and university medal recipient, Jodie Pall.

Pall unfurled a banner on stage in the Great Hall in front of the University chancellery, which read “USyd: Cut your ties with weapons dealers #DisarmUnis”.

The University of Sydney currently invests over $5 million in weapons dealers worldwide, with $3.3 million of that in Honeywell, the manufacturer of the MQ-9 Reaper drone engine – the deadliest drone in operation.

“It’s appalling that an institution that prides itself on moral leadership could partner up with those currently profiting from armed conflict and war,” said Pall.

Belinda Hutchinson, Chancellor of the University of Sydney, currently is the chair of Thales Australia. Thales is one of the top arms manufacturers operating in Australia, actively participating in the global arms trade and producing lethal weaponry for the Australian Defence Force. USyd has recently signed a 5-year research partnership with Thales, raising concerns about a conflict of interest.

This is the first protest planned by #DisarmUnis, a campaign to sever the relationship between universities and weapons companies. Information about the University of Sydney’s financial ties to arms manufacturers was released after a student-led Freedom of Information investigation in March, sparking outrage from students.

As the Australian Government gears up for its biggest defence build-up since WWII, #DisarmUnis will be calling on universities to end their business with the arms industry.

“Universities nationwide are trying desperately to profit from war – and in the process are handing over control to weapons dealers. We represent the broad majority of staff, students and alumni when we say we need to cut the ties now,” said Ed Mortimer, a spokesperson for #DisarmUnis.

“We are gearing up for a national campaign to put an end to this war profiteering. While on the brink of climate change and escalating military tensions, we will not tolerate the presence of the destructive weapons industry in our universities.”