Daniel Berrigan’s Ethic of Resurrection and the Kings Bay Plowshares 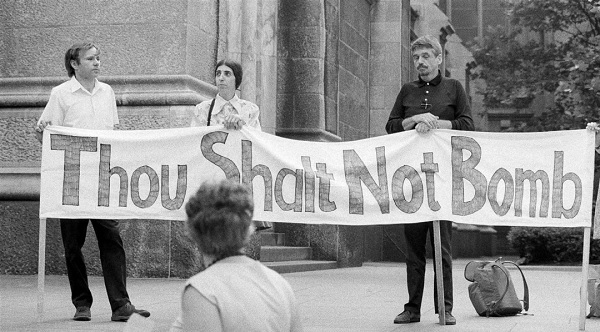 “The No to state uttered by the unarmed Christ is vindicated in His resurrection.  Of this, the world can never be a witness…This is our glory. From Peter and Paul to Martin Luther King, Jr. and Romero. Christians have known something which the “nations” as such can never know or teach—how to live and how to die. We are witnesses to the resurrection. We practice resurrection. We risk resurrection.”  Daniel Berrigan (Testimony: The Word Made Fresh, p. 222-223)

April 30th marks the second anniversary of the death of Daniel Berrigan, SJ,  the renowned prophetic priest, peacemaker, writer and poet. Dan was an important friend and mentor to me and countless others. His spirit lives on in the hearts of all he touched throughout his 94 years. And his writings and poems continue to instruct and challenge.

During this Holy Season of Easter, I have been pondering Dan’s words in his profound and deeply challenging essay, “An Ethic  of Resurrection,” from Testimony. How do we understand resurrection in a time of pervasive systemic racism, violence, oppression, inequality, perpetual war, rampant political instability and corporate domination, and the ever present threats of nuclear extinction and climate chaos?

When I read Dan’s words, this is how I interpret them and apply it to our present context: To be witnesses to the resurrection we must utter our ‘No’ to State-sanctioned violence, racism, oppression, injustice and all that endangers life and creation. We must utter an unequivocal ‘No’ to ALL that divides, demeans and destroys! We must act in the hope of the resurrection—a hope that is rooted in the  conviction that Jesus has forever overcome the forces of sin and death! Thus, our ‘Yes’ to this belief compels us to resist the forces of death and evil in our world, to risk the cross and practice resurrection!

Dan Berrigan showed us how to be a witness to the resurrection. Clearly, his “No” and “Yes” were rooted in his faith in the crucified and risen Jesus. Dan’s exemplary life witness is a powerful testimony to resurrection hope!

It is this hope that compelled him to risk traveling to a war zone in North Vietnam in 1968, and to be involved in two prophetic watershed peace actions: the Catonsville Nine Action (May 17 will mark the 50th anniversary of this action) and the Plowshares Eight witness.

Dan, along with his brother Phil and six other peacemakers, carried out the first of what have come to be known as “plowshares” actions. The Plowshares Eight action took place on September 9, 1980 at the General Electric Nuclear Re-entry Division in King of Prussia, Pennsylvania. The eight hammered on two nose cone of the Mark 12 A nuclear warhead, poured blood on documents and offered prayers for peace. They were arrested and initially charged with over ten felony and misdemeanor counts.

In their action statement the Plowshares Eight declared: “In confronting GE we choose to obey God’s law of life, rather than a corporate summons to death. Our beating of swords into plowshares is a way to enflesh this biblical call. In our action, we draw on a deep-rooted faith in Christ, who changed the course of human history through his willingness to suffer rather than to kill. We are filled with hope for our world and for our children as we join this act of resistance.”

They were convicted by a jury of burglary, conspiracy and criminal mischief and sentenced to prison terms of five to ten years. This sentence was appealed and in litigation until 1990. They were resentenced and paroled for up to 23 1/2 months in consideration of time already served in prison.

The Plowshares Eight action has inspired over 100 similar actions to date, two of which, in 1982 and 1989, both directed at the Trident ballistic missile submarine, I was honored to be a part of.

In their action statement they the Kings Bay Plowshares declared:

“We come to Kings Bay to answer the call of the prophet Isaiah (2:4) to “beat swords into plowshares” by disarming the world’s deadliest nuclear weapon, the Trident submarine… Nuclear weapons eviscerate the rule of law, enforce white supremacy, perpetuate endless war and environmental destruction and ensure impunity for all manner of crimes against humanity… A just and peaceful world is possible when we join prayers with action. Swords into Plowshares!”

The peacemakers went to three sites on the base: the administration building, the D5 Missile monument installation and the nuclear weapons storage bunkers. They used crime scene tape, hammers and hung banners reading: “The ultimate logic of racism is genocide, Rev. Dr. Martin Luther King, Jr.” The ultimate logic of Trident is omnicide” and Nuclear weapons: illegal and immoral.” They also brought an indictment charging the U.S. Government for crimes against peace.

All of the participants knew Dan. One is his sister-in-law, Liz McAlister. And the other, a brother Jesuit, Steve Kelly. During his homily at Dan’s funeral, Kelly recommended that Dan, and his brother Phil, be granted the title “Doctors of the Church!”

The seven are currently being charged with two felony counts and a misdemeanor and are being held without bond at the Camden County jail.

From jail, Elizabeth McAlister, explained the action in this way:

“Modest hopes is the title of one of the more than fifty books by my late brother-in-law Daniel Berrigan (RIP and Presente!) It might be fair to say that we came to Kings Bay Submarine base animated by the absurd conviction that we could make some impact on slowing, if not ending, the mad rush to the devastation of our magnificent planet. And this is no extreme overstatement. The six Trident submarines that consider Kings Bay their homeport carry enough destructive power to destroy all life on Earth. What difference can seven aging activists make?
We come with hammers to imprint the pristine coat of the weapon…We come with blood (our own) to mark the weapons’ purpose as the spilling of blood and yes,
We come with bolt cutters to violate the fences that protect the weapons that spell death to all life.

Martha Hennessy, the granddaughter of Dorothy Day who is part of the Catholic Worker in New York City, offered this reflection about the Kings Bay Plowshares action from jail: “We walked in the dark, stars overhead, with Orion at our shoulder and the waning moon rising late. Praise to you Dear God, for this gift of Eden. There were fire flies and croaking frogs to keep us company. And to think the logic of Trident is the obliteration of Creation. What did God whisper to my ancestors and then to me? Swords into Plowshares! We don’t mean to make everyone furious, but why turn our blood and hammers into spray paint and bolt cutters? (In charging documents the Magistrate referred to their possession of bolt cutters and spray paint, but willfully ignored mention of the symbols of blood and hammers that were used in the action)

Why continue to set the desecrated altar to the false idols of war? We walked onto a military base that harbors the ultimate destruction, and we prayed for the power of a message, of a witness that could reach many ears; conversion of free will towards life- giving work and away from death dealing false constructs.

We strung up crime scene tape over the model missiles  and over the door to the Strategic Weapons Facility Atlantic (SWFLANT), a place where war plans promise to take all we love. We wish to indict this war machine for what it is: immoral, illegal, and monstrous. Our foolish plans desire to see a world in which the suffering is lessened, our leaders begin to know what it means if they pull the nuclear trigger. Our action is an invitation to all for a change of heart that will bring us to true revolution.”

I am deeply moved by the courageous action of the Kings Bay Plowshares, who are friends to me and to many others who will celebrate their action. Their prophetic witness is a clear testament to the truth of the Gospel and the hope of Easter.  Let us do all we can to support the Kings Bay Plowshares, and their families and communities, as they continue their hope-filled witness in jail and as they face the courts.

Like Dan, they believe that the powers and principalities and the forces of death will never have the last word.

(Art Laffin is a member of the Dorothy Day Catholic Worker in Washington, DC and is co-editor of Swords Into Plowshares)