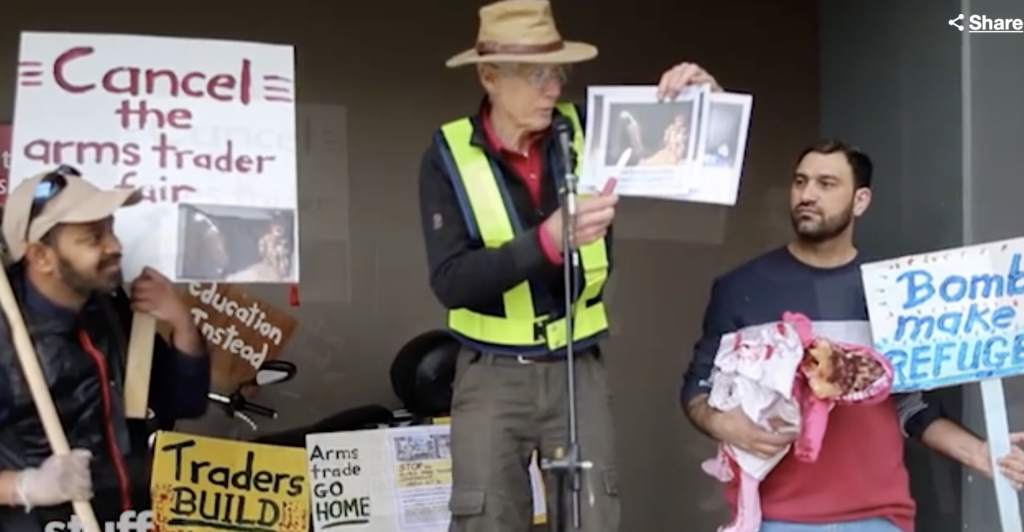 A controversial military expo has been scrapped by organisers and protesters are claiming success in shutting down down the war industry.

The New Zealand Defence Industry Association (NZDIA) has decided not to hold a forum in 2019, after years of peace groups disrupting the “weapons expo”.

Ten protesters were arrested outside the event in Palmerston North in 2018, and 14 were arrested the year before at Wellington’s Westpac Stadium.

NZDIA chairman Andrew Ford said the event was not planned for 2019 for numerous reasons, including “the safety of delegates, guests and community in the face of aggressive protest action”.

Ford said other industry events held in Australia this year, and a preference for smaller forums meant the annual event was not required.

Auckland Peace Action and Organise Aotearoa both issued statements celebrating the end of the forum.

Green Party defence spokeswoman Golriz Ghahraman​, who spoke at the 2018 protest, said the forum was against the values of New Zealand.

“We should be using our rise in diplomatic prowess to speak to peace … To then be hosting essentially a sale expo for these weapons companies, is perverse.

“Especially now we have had Christchurch [terror attacks] happen, and we know that much of the community affected by that is actually people escaping from war.”

​Ghahraman said the companies which attended the forum sold arms, such as autonomous weapons, the international community was trying to ban.

“Whilst they might not be bringing that particular kind of weapon here … that’s who we’re supporting.”

The forum, sponsored in 2017 by nuclear weapons and arms giant Lockheed Martin, has been attended by the Ministry of Defence, New Zealand Defence Force and other government agencies responsible for national security.

Local government leaders have expressed their distaste for the event in response to protest action.

After the Christchurch terror attack in March, Palmerston North Mayor Grant Smith said the council would likely distance itself from events related to guns and armaments.

In 2017 Wellington Mayor Justin Lester said  the forum was “not an appropriate event for a civic venue” .