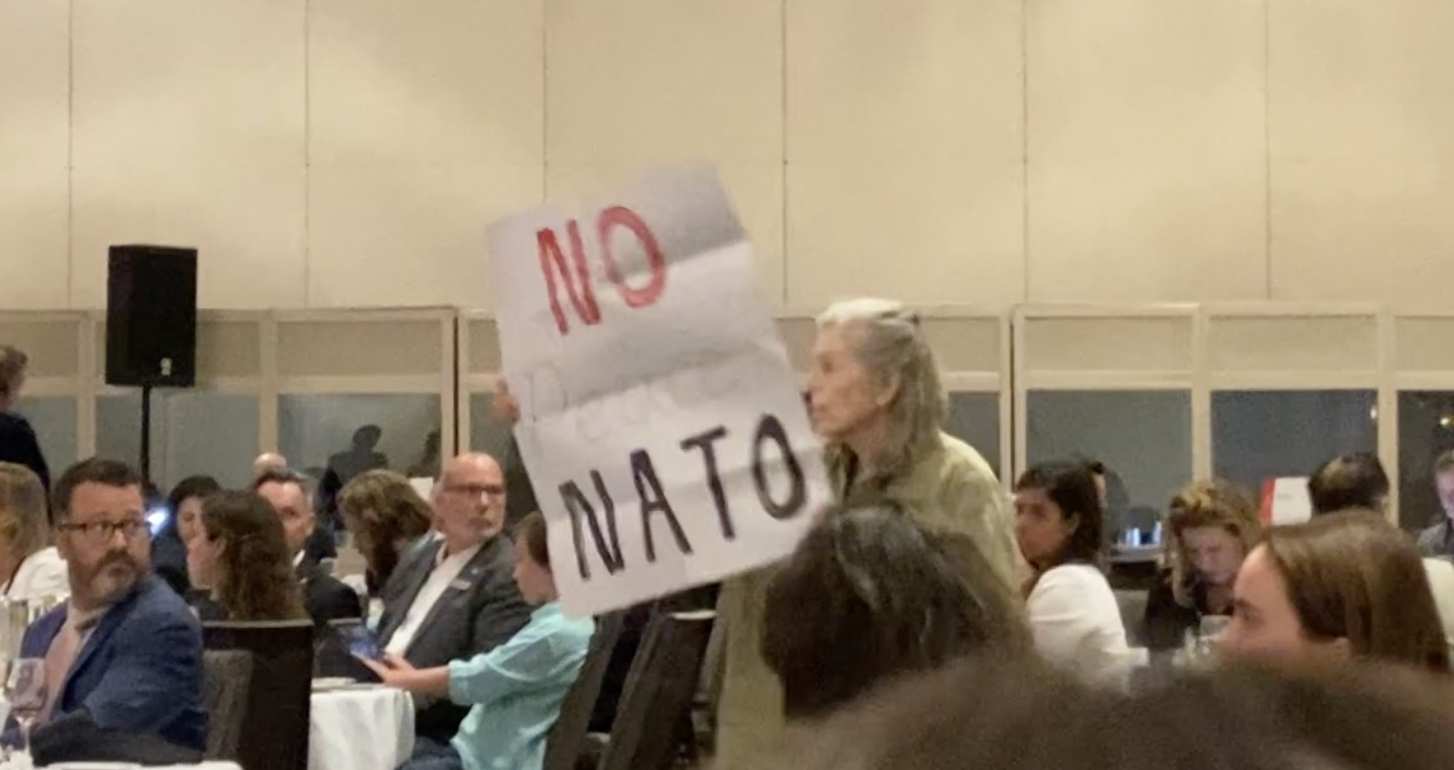 On August 3, 2022, two Montreal activists, Dimitri Lascaris and Laurel Thompson, disrupted a public-relations presentation by Canadian Foreign Minister Melanie Joly and her German homologue Annalena Baerbock. The event was hosted by the Montreal Chamber of Commerce.

Before the two activists entered, Joly and Baerbock were describing how Canada recently returned a turbine to Germany that was needed to maintain Nord Stream I gas flows from Russia. Without gas from Russia, Germany would be faced with a potentially catastrophic energy shortage this winter. However, as Lascaris pointed out, Joly revealed a bit of her own superficiality in justifying her action. While the decision to return the turbine was painted as a humanitarian act, Joly revealed this choice to be a part of a strategy to prevent the Putin government from being able to blame Canada’s government for Germany’s gas crisis. Lascaris comments dryly, ”Silly me, I thought that the priority of the Trudeau government was to help the German people, not to win a propaganda war with Putin.”

Laurel Thompson got the blasé audience members to look up from their cell phones as she entered the room and raised a “NO NATO” placard. Thompson recalled:

“When I heard that Annalena Baerbock and Mélanie Joly were going to be present at a Montreal Chamber of Commerce colloquium last Wednesday, I decided to make my debut as an anti­war disruptor. Disruption is tricky because you are trying to break into a presentation with elected leaders that will be covered by the media. You know you will be stopped, so you have to get your message out as quickly as possible. At the same time, just that tiny bit of publicity is worthwhile because it lets people know that not everyone agrees with what is being done in our name. With the hotheads who are running the world these days, this is critical. They might start to hesitate a little.

I had a sign tucked into the back of my pants so when it came time to intervene, I pulled it out and walked to the centre of the room where the cameras were. I held it up in front of them. I then turned around and spoke to the stage where Baerbock and Joly were sitting. I don’t have a very loud voice so I don’t think very many people heard me. I said that NATO’s fight against Russia was wrong, and they should be negotiating not encouraging war. Canada is spending too much money on weapons. Immediately, I was stopped by two men who gently pushed me toward the exit doors. One of the men ushered me down four escalators and out the front door of the hotel. I was outside the event in less than two minutes.”

”Minister Baerbock, your party is supposed to be committed to nonviolence. Your party was born out of opposition to NATO. You have betrayed the core values of the Green party by supporting NATO expansion up to the borders of Russia, and by supporting increased military spending. NATO is destabilizing Europe and the world!”

After the intervention, Thompson stated:

“The show continued after we were gone and our brief interruption of it has probably disappeared from the memory of those who were there in the room with us. However, I am now convinced that disruption, done well, is an effective strategy. It takes courage to stand up and yell when other people are on a stage talking. But, since the other platforms available — letters to members of Parliament, manifestations — have not worked, what choice do we have? Peace is never mentioned these days. The reason why it is never mentioned is because no one, except us, seems to want it. Okay, so say it louder!”

Bravo to these two bold disruptors for speaking out for peace! They have shaken the business people out of their complacency, destabilized the politicians, and inspired other activists to follow their lead.