Don’t Get Your Hopes Up! The Leaking Massive Red Hill Jet Fuel Tanks Will Not Be Closed Anytime Soon! 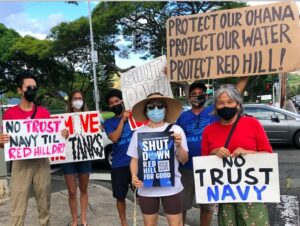 On March 7, 2022 Secretary of Defense Lloyd Austin ordered the defueling and closure of the 80-year-old leaking 250 million gallon jet fuel tanks at Red Hill on the island of O’ahu, Hawai’i.  The order came 95 days after a catastrophic 19,000-gallon leak of jet fuel into one of the drinking water wells operated by the U.S. Navy.  The drinking water of over 93,000 persons was contaminated, including the water of many military and civilian families living on military bases.  Hundreds went to emergency rooms for treatment of rashes, headaches, vomiting, diarrhea and seizures.  The military placed thousands of  military families in hotels Waikiki resorts for over 3 months while civilians were left to find their own accommodations.  The military says it has already spent $1 billion on the catastrophe and the US Congress has allocated another $1 billion to the military, but none to the State of Hawai’i for the damage to the aquifer for the island.

The initial euphoria of the Secretary of Defense’s announcement of the decision to defuel and close the tanks has worn off to citizens, city and state officials.

Three wells of the City of Honolulu were shut down to prevent drawing the jet fuel plume from the Red Hill water well shaft further into the island’s main aquifer that provides drinking water for 400,000 persons on O’ahu.  The island’s Board of Water Supply has already issued a request for water curtailment to all residents and warned of water rationing in the summer.  Additionally, it has warned the business community that construction permits for 17 pending projects may be denied if the water crisis continues.

Another leak has occurred since the announcement.  On April 1, 2022 the US Navy said that either 30 or 50 gallons of jet fuel leaked, depending on the news release.  Many observers are wary of the number as the Navy has under reported previous leaks.

Military and civilian families who have returned to their homes after the military conducted flushing of the water pipes continue to report headaches from the smell coming from flushed taps and rashes from bathing with flushed water. Many are using bottled water at their own expense.

One active duty military member and mother created a list of 31 symptoms that are still suffered by family members living in homes that have been “flushed” of the contaminated water and polled persons on the Facebook support group.

I am including the top 20 symptoms in the poll and the number of persons responding give a chilling reminder of what the families have been going through for the past 4 and one-half months. I am also posting this because none of the military, federal or state agencies have ever published any data or surveys.  The symptoms were posted in an April 8 JBPHH Water Contamination Facebook page entry.  In 7 days on Facebook, these are the responses as of April 15, 2022:

The Secretary of Defense March 7 order states in part: “By no later than May 31, 2022, the Secretary of the Navy and Director, DLA will provide me with a plan of action with milestones to defuel the facility. The plan of action shall require that defueling operations commence as soon as practicable after the facility is deemed safe for defueling and target the completion of that defueling within 12 months.”

It is 39 days since the Secretary of Defense issued his order that the jet fuel tanks will be closed.

It is 45 days until the May 31 deadline for a PLAN of how to defuel the tanks is presented to the Secretary of Defense.

It is 14 days since the last leak of jet fuel at Red Hill.

It is 150 days since a report on the 2014 leak of 27,000 gallons was given in December 2021 to Navy brass and neither the State of Hawaii, City of Honolulu’s Board of Water Supply, nor the public have been informed of its contents.

The Navy has not withdrawn its February 2, 2022 lawsuits in State and Federal courts against the State of Hawaii’s December 6, 2021 emergency order to stop operations and defuel the Red Hill tanks.

The State of Hawaii’s December 6, 2021 emergency order required the Navy to hire an independent contractor, approved by the Department of Health, to assess the Red Hill facility and recommend repairs and improvements for safely draining the underground fuel tanks.

On January 11, 2022, the Navy allowed the Department of Health to review the contract only hours before signing and DOH determined that the Navy has too much control over the evaluation and work.  “This disaster is about more than just engineering—it’s about trust,” said DOH’s Deputy Director of Environmental Health Kathleen Ho in a press release. “It is critical that the work to defuel Red Hill is done safely and that the third-party contractor hired to oversee that work will operate in the interests of the people and environment of Hawaiʻi. Based on the contract, we have serious concerns about SGH’s work being done independently.”

We have no idea how long it will take the Department of Defense to determine that the Red Hill  fuel tanks are “safe” to defuel.  The May 31st deadline is for a plan to defuel does not given us any indication of how long it may take after the facility is “deemed safe.”

However, Hawaii’s Senator Mazie Hirono gave us an indication that the shut down process is going to take longer than most of us are comfortable with.  She has received briefings from the military during her trips into the Red Hill fuel storage facility about the condition of the Red Hill facility. In a Senate Armed Services committee hearing on April 7, the first hearing that Secretary of Defense Austin has testified in since his March 7 order to close Red Hill, Senator Hirono said to Austin, “The closure of Red Hill is going to be a multi-year and multi-phased endeavor.  It is imperative that a great deal of attention be paid to the defueling process, the closure of the facility and the clean-up of the site.  The entire effort will require significant planning and resources for years to come.”

While prior to the massive 19,000 gallon leak in later November 2021, the US Navy was pumping fuel up to Red Hill from fuel tankers docking at Pearl Harbor and pumping fuel back downhill to Pearl Harbor for refueling ships at Hotel Pier in Pearl Harbor, we suspicion that the Department of Defense will not be in a hurry to defuel the tanks and will use the “deemed safe” phrase as a way to slow down the process.

We certainly want the defueling process to be safe, but as far as we know, it has always been safe to move fuel up to the tanks and back down to the ships.

If this process has not been safe in the past, the public certainly deserves to know when it was deemed “unsafe.”

The bottom line is that we must push for the tanks to be defueled expeditiously before another catastrophic leak occurs.

ABOUT THE AUTHOR
Ann Wright served 29 years in the US Army/Army Reserves and retired as a Colonel.  She was a US diplomat for 16 years and served in US Embassies in Nicaragua, Grenada, Somalia, Uzbekistan, Kyrgyzstan, Micronesia, Afghanistan and Mongolia.  She resigned in March 2002 in opposition to the US war on Iraq.  She is the author of Dissent: Voices of Conscience” and a member of Hawai’i Peace and Justice, O’ahu Water Protectors and Veterans For Peace.