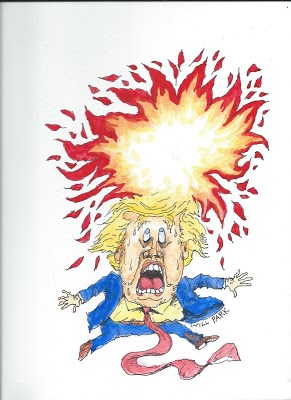 Trump touched down in Hawaii on his way to Asia.  He was met with protests there and huge marches are happening across South Korea in anticipation of his meeting with the newly elected President Moon in Seoul.

Moon is turning out to be a disappointment to peaceniks across Korea as he carries water for the US imperial project.  It’s a clear sign that those supposedly in charge in South Korea are not.  They are at the mercy of Washington and the military industrial complex.

China during the last couple of days sent nuclear bombers bumping up with the coast of Guam in a certain statement before Trump visits Beijing.  Just weeks ago, while speaking at the UN, Trump blasted socialism as a failed system – many taking it as a shot across China’s bow before his trip there.  China has fired back showing the Donald that two can play the nuclear ‘fire and fury’ ball game.

Beijing has repeatedly warned the US that if Washington decides to ‘decapitate’ North Korea then China will be forced to come into the war to stop the US invasion of the north.

North Korea borders both China and Russia and neither of those nations can afford to allow an aggressive US military outpost in the northern region of the Korean peninsula.  It’s a deal breaker to use Trumpian lingo.

Trump’s Asia-Pacific sales trip will take him to Japan (to meet with the fascist Prime Minister Shinzo Abe, grandson of an imperial Japanese war criminal), South Korea, China, Vietnam (where the US is trying to cut a deal get to permission to use the Cam Ranh Bay Navy base), and the Philippines (where the US is once again porting its warships at Subic Bay after being kicked out in 1992).

Trump’s primary job is to hold the line as anti-American fervor sweeps the Asia-Pacific.  US base expansions in Okinawa and South Korea has fueled popular resistance to the Obama-Clinton era ‘pivot’ of 60% of American military forces into the region which requires more ports-of-call, more airfields and more barracks for US troops.  With these base expansions comes environmental degradation, dramatically increased noise pollution, GI disrespect and mistreatment of local citizens, stealing of lands from farm and fishing communities, Pentagon arrogance about its control over host governments and many other local grievances.  Washington is not interested in hearing about, or seriously negotiating, these deep concerns thus the official Pentagon response is more bluster and domination which only fuels the fires of domestic rage.

The US military is the loaded gun placed at the head of all Asia-Pacific nations – you either comply with Washington’s economic demands or this instrument of destruction will be used.  The cancerous US military occupation of the region has nothing to do with defending the American people. The Pentagon defends corporate ‘interests’ which require a submissive region.

The US is in a bind as its imperil project collapses overseas and at home.  Trump’s ‘Make American Great Again’ mantra are code words to restore the empire’s prestige and domination.  But there is no going back – like white supremacy at home, those days are long gone.

The US’s only option is to close its more than 800 military bases around the world and bring its occupation troops home.  Learn to get along with others and bury the idea that America is the master race – the ‘exceptional’ nation.

The other option is World War III which would go nuclear in a cold hard flash. No one wins that one.

The American people ought to wise up and see the writing on the wall.  But they’d need a real media to share with them the true feelings of the occupied people around the world and we don’t have that – ours is a subservient media that promotes only corporate interests to US citizens.

Plus the American people would need to care about other people around the world – human solidarity has largely been beaten out of the hearts of our citizenry. Even most liberals currently babble the anti-Russian recycled red-baiting being fomented by elected Democrats in the hardened halls of Washington.

There is no escaping the sad fact that it will be a brutal collapse for America and it is surely coming.