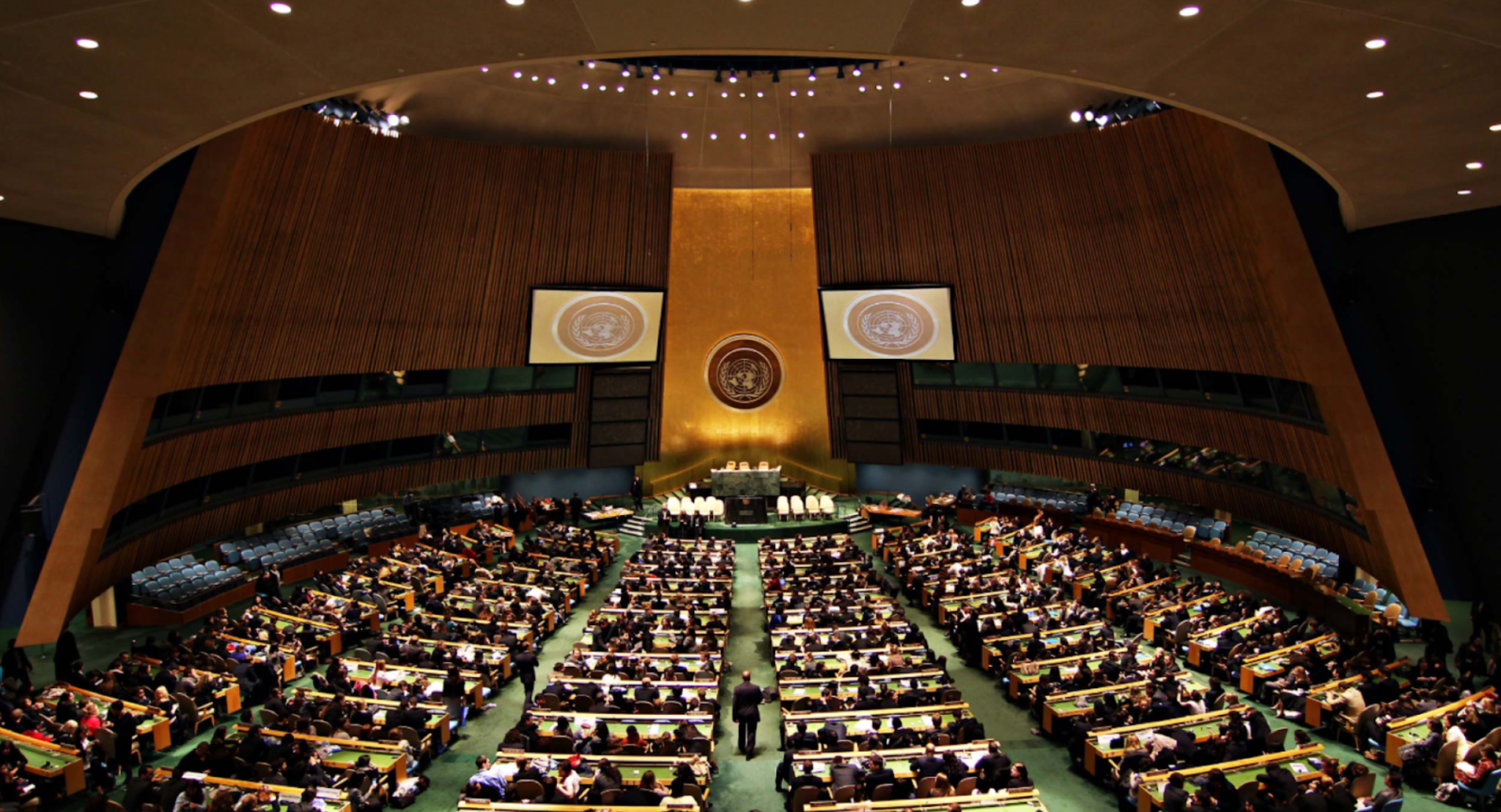 We have spent the past week reading and listening to speeches by world leaders at the UN General Assembly in New York. Most of them condemned Russia’s invasion of Ukraine as a violation of the UN Charter and a serious setback for the peaceful world order that is the UN’s founding and defining principle.

But what has not been reported in the United States is that leaders from 66 countries, mainly from the Global South, also used their General Assembly speeches to call urgently for diplomacy to end the war in Ukraine through peaceful negotiations, as the UN Charter requires. We have compiled excerpts from the speeches of all 66 countries to show the breadth and depth of their appeals, and we highlight a few of them here.

African leaders echoed one of the first speakers, Macky Sall, the president of Senegal, who also spoke in his capacity as the current chairman of the African Union when he said, “We call for de-escalation and a cessation of hostilities in Ukraine, as well as for a negotiated solution, to avoid the catastrophic risk of a potentially global conflict.”

The 66 nations that called for peace in Ukraine make up more than a third of the countries in the world, and they represent most of the Earth’s population, including India, China, Indonesia, Bangladesh, Brazil and Mexico.

While NATO and EU countries have rejected peace negotiations, and U.S. and U.K. leaders have actively undermined them, five European countries – Hungary, Malta, Portugal, San Marino and the Vatican – joined the calls for peace at the General Assembly.

The peace caucus also includes many of the small countries that have the most to lose from the failure of the UN system revealed by recent wars in Ukraine and the Greater Middle East, and who have the most to gain by strengthening the UN and enforcing the UN Charter to protect the weak and restrain the powerful.

Philip Pierre, the Prime Minister of Saint Lucia, a small island state in the Caribbean, told the General Assembly,

“Articles 2 and 33 of the UN Charter are unambiguous in binding Member States to refrain from the threat or use of force against the territorial integrity or political independence of any state and to negotiate and settle all international disputes by peaceful means.…We therefore call upon all parties involved to immediately end the conflict in Ukraine, by undertaking immediate negotiations to permanently settle all disputes in accordance with the principles of the United Nations.”

Global South leaders lamented the breakdown of the UN system, not just in the war in Ukraine but throughout decades of war and economic coercion by the United States and its allies. President Jose Ramos-Horta of Timor-Leste directly challenged the West’s double standards, telling Western countries,

“They should pause for a moment to reflect on the glaring contrast in their response to the wars elsewhere where women and children have died by the thousands from wars and starvation. The response to our beloved Secretary-General’s cries for help in these situations have not met with equal compassion. As countries in the Global South, we see double standards. Our public opinion does not see the Ukraine war the same way it is seen in the North.”

Many leaders called urgently for an end to the war in Ukraine before it escalates into a nuclear war that would kill billions of people and end human civilization as we know it. The Vatican Secretary of State, Cardinal Pietro Parolin, warned,

“…the war in Ukraine not only undermines the nuclear non-proliferation regime, but also presents us with the danger of nuclear devastation, either through escalation or accident. … To avoid a nuclear disaster, it is vital that there be serious engagement to find a peaceful outcome to the conflict.”

Others described the economic impacts already depriving their people of food and basic necessities, and called on all sides, including Ukraine’s Western backers, to return to the negotiating table before the war’s impacts escalate into multiple humanitarian disasters across the Global South. Prime Minister Sheikh Hasina of Bangladesh told the Assembly,

“We want the end of the Russia-Ukraine war. Due to sanctions and counter-sanctions, …the entire mankind, including women and children, is punished. Its impact does not remain confined to one country, rather it puts the lives and livelihoods of the people of all nations in greater risk, and infringes their human rights. People are deprived of food, shelter, healthcare and education. Children suffer the most in particular. Their future sinks into darkness.

My urge to the conscience of the world – stop the arms race, stop the war and sanctions. Ensure food, education, healthcare and security of the children. Establish peace.”

Turkey, Mexico and Thailand each offered their own approaches to restarting peace negotiations, while Sheikh Al-Thani, the Amir of Qatar, succinctly explained that delaying negotiations will only bring more death and suffering:

“We are fully aware of the complexities of the conflict between Russia and Ukraine, and the international and global dimension to this crisis. However, we still call for an immediate ceasefire and a peaceful settlement, because this is ultimately what will happen regardless of how long this conflict will go on for. Perpetuating the crisis will not change this result. It will only increase the number of casualties, and it will increase the disastrous repercussions on Europe, Russia and the global economy.”

It is therefore in our collective interest to work constructively, both within the United Nations and outside, in finding an early resolution to this conflict.”

One of the most passionate and eloquent speeches was delivered by Congolese Foreign Minister Jean-Claude Gakosso, who summarized the thoughts of many, and appealed directly to Russia and Ukraine – in Russian!

“Because of the considerable risk of a nuclear disaster for the entire planet, not only those involved in this conflict but also those foreign powers who could influence events by calming them down, should all temper their zeal. They must stop fanning the flames and they must turn their backs on this type of vanity of the powerful which has so far closed the door to dialogue.

Under the auspices of the United Nations, we must all commit without delay to peace negotiations – just, sincere and equitable negotiations. After Waterloo, we know that since the Vienna Congress, all wars finish around the table of negotiation.

The world urgently needs these negotiations to prevent the current confrontations – which are already so devastating – to prevent them from going even further and pushing humanity into what could be an irredeemable cataclysm, a widespread nuclear war beyond the control of the great powers themselves – the war, about which Einstein, the great atomic theorist, said that it would be the last battle that humans would fight on Earth.

Nelson Mandela, a man of eternal forgiveness, said that peace is a long road, but it has no alternative, it has no price. In reality, the Russians and Ukrainians have no other choice but to take this path, the path of peace.

Moreover, we too should go with them, because we must throughout the world be legions working together in solidarity, and we must be able to impose the unconditional option of peace on the war lobbies.

(Next three paragraphs in Russian) Now I wish to be direct, and directly address my dear Russian and Ukrainian friends.

Think about the youth of your two countries. Think about the fate of your future generations. The time has come to fight for peace, to fight for them. Please give peace a real chance, today, before it is too late for us all. I humbly ask this of you.”

At the end of the debate on September 26, Csaba Korosi, the president of the General Assembly, acknowledged in his closing statement that ending the war in Ukraine was one of the main messages “reverberating through the Hall” at this year’s General Assembly.

You can read here Korosi’s closing statement and all the calls for peace he was referring to.

And if you want to join the “legions working together in solidarity… to impose the unconditional option of peace on the war lobbies,” as Jean-Claude Gakosso said, you can learn more at https://www.peaceinukraine.org/.

Medea Benjamin and Nicolas J. S. Davies are the authors of War in Ukraine: Making Sense of a Senseless Conflict, available from OR Books in October/November 2022.

Medea Benjamin is the cofounder of CODEPINK for Peace, and the author of several books, including Inside Iran: The Real History and Politics of the Islamic Republic of Iran.