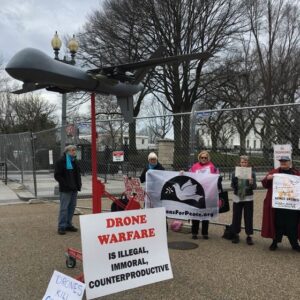 In December 2001, a little over fifteen years ago, I was on the small five-person team that reopened the U.S. Embassy in Kabul, Afghanistan.  Now fifteen years later, the same questions we asked almost two decades ago are being asked about the U.S. involvement in Afghanistan and we are getting many of the same answers.

The questions are: why have we been in Afghanistan for fifteen years and where are the billions of dollars the U.S. put into Afghanistan?

And the answers are the same year after year—the U.S. is in Afghanistan to defeat the Taliban and al Qaeda, (and now other extremists groups) so they can’t attack the United States.  For fifteen years, the most advanced and well-funded military in the world has attempted to defeat the Taliban and Al Qaeda, arguably the least funded and least equipped militia forces in the world, and has not succeeded.

Where has the money gone?  Much has gone to Dubai for apartments and condos for Afghan leaders and to contractors (U.S., Afghan and others) who have made millions off the U.S. involvement in Afghanistan.

At the February 9, 2017, Senate Armed Services committee hearing on Afghanistan, John Nicholson, the commanding General of U.S. Forces in Afghanistan, answered questions for two hours in the Senate hearing about U.S. involvement in Afghanistan. He also submitted a twenty page written statement on the current situation in Afghanistan. http://www.armed-services. senate.gov/imo/media/doc/ Nicholson_02-09-17.pdf

In response to one Senator’s question, “Is Russia meddling in Afghanistan?,”  Nicholson responded: “While Russia has counter-narcotics about Afghanistan and terrorist attack concerns from the extremist groups in Afghanistan, since 2016 we believe Russia has been helping the Taliban in order to undermine the U.S. and NATO mission.  The Taliban is the medium through which other extremist groups operate in Afghanistan. We are concerned about the increasing cooperation between Russia and Pakistan that continues to provide a sanctuary for Taliban senior leadership.  Russia and Pakistan have held joint military exercises in Pakistan. We and our Central Asian allies are nervous about Russian intentions.”

Nicholson said “progress continues to be made on the U.S. mission of training, advising and assessing (TAA) the Afghan security forces.”  No Senator asked why after 16 years the U.S. has to continue to do the same training—and how long this type of training had go on to train forces capable of defeating the Taliban and other groups.

Nicholson said that U.S. and NATO had committed to a minimum of four more years in Afghanistan at the NATO conference in Warsaw, Poland in July 2016.  At a donor’s conference in Brussels in October 2016, 75 donor countries offered $15 billion for the continued reconstruction of Afghanistan. The U.S. will continue contributing $5 billion per year through 2020. https://www.sigar.mil/pdf/ quarterlyreports/2017-01-30qr. pdf

In his written statement Nicholson added that 30 other nations pledged more than $800M annually to fund the Afghan National Defense and Security Forces (ANDSF) until the end of 2020 and that in September, India added $1B to the $2B it already committed to Afghanistan’s development.

Since 2002, the U.S. Congress has appropriated more than $117 billion for Afghanistan’s reconstruction (training Afghan security forces, standing up the Afghan government, providing health care and education to the Afghan people, and developing the Afghan economy), the largest expenditure to rebuild any country in the history of the United States.  https://www.sigar.mil/pdf/ quarterlyreports/2017-01-30qr. pdf

Nicholson said the 8,448 U.S. military personnel in Afghanistan now must remain to protect the U.S. from extremist groups in Afghanistan and Pakistan where 20 of the 98 designated terrorist groups in the world are located.  He said there is no cooperation between the Afghanistan Taliban and ISIS, but that most ISIS fighters come from/through the Pakistani Taliban.

Since the military troop levels have remained the same in the past year, one would extrapolate that the number of civilian contractors is about the same for 2017 for a total of about 37,000 U.S. military personnel and DOD contractors in Afghanistan.

The largest number of U.S. military in Afghanistan was 99,800 in the second quarter of 2011 and the highest number of military contractors was 117,227 of which 34,765 were U.S. nationals was in the second quarter of 2012 for a total of approximately 200,000 U.S. personnel in the country, excluding State Department employees and contractors.  https://fas.org/sgp/crs/ natsec/R44116.pdf   Data on the numbers of State Department personnel and contractors each year in Afghanistan is not available.

Senator McCaskill asked Nicholson tough questions on the continuing graft and corruption within the Afghan government and with local and international contractors.  Nicholson said that after fifteen years, he believes the U.S. is finally able to identify “ghost” soldiers on the military payroll and stop payments to the military leader who had submitted the names.  Additionally, Nicholson added that according to the latest U.S. Department of State Inspector General report on graft and corruption in the contracting field said that $200 million in overpayments to contractors for a $1 billion contract for gasoline supplies had resulted in the conviction of one Afghan general and four contactors banned from bidding on contracts. Payments to “ghost soldiers” and overpayments for gasoline have been the greatest source of corruption recently in Afghanistan. https://www.sigar.mil/pdf/ quarterlyreports/2017-01-30qr. pdf

Another Senator whose state is ravaged by drug overdoses asked, “With so many deaths in the US from drug overdoses coming opiates coming from Afghanistan, why hasn’t US/NATO eliminated the opium poppy fields in Afghanistan?”  Nicholson replied: ” I don’t know, and it’s not our military mandate.  Some other agency will have to do that.”

Nicholson said that efforts for reconciliation with Taliban and other groups have had limited success. On September 29, 2016, four decade fighter against the Soviet Union, other militia forces during the civil war, the Taliban and U.S./NATO, Gulbuddin Hekmatyar, leader of Hezb-e Islami signed a peace accord with the Afghan government allowing the return of 20,000 militia and their families to Afghanistan.  https://www.afghanistan- analysts.org/peace-with- hekmatyar-what-does-it-mean- for-battlefield-and-politics/

Nicholson said that some Afghan fighters continue to change alliances based on which faction offers the most money and security.

In an open letter https://www.veteransforpeace. org/pressroom/news/2017/01/30/ open-letter-donald-trump-end- us-war-afghanistan to President Trump to end the Afghanistan War, many organizations and individuals urge the new U.S. president to end the longest war in the history of the country:

“Ordering young American men and women into a kill-or-die mission that was accomplished 15 years ago is a lot to ask. Expecting them to believe in that mission is too much. That fact may help explain this one: the top killer of U.S. troops in Afghanistan is suicide. The second highest killer of American military is green on blue, or the Afghan youth who the U.S. is training are turning their weapons on their trainers! You yourself recognized this, saying: “Let’s get out of Afghanistan. Our troops are being killed by the Afghans we train and we waste billions there. Nonsense! Rebuild the USA.”

The withdrawal of U.S. troops would also be good for the Afghan people, as the presence of foreign soldiers has been an obstacle to peace talks. The Afghans themselves have to determine their future, and will only be able to do so once there is an end to foreign intervention.

We urge you to turn the page on this catastrophic military intervention. Bring all U.S. troops home from Afghanistan. Cease U.S. airstrikes and instead, for a fraction of the cost, help the Afghans with food, shelter, and agricultural equipment.”

Fifteen years of the same questions and the same answers about the Afghanistan war.  It’s time to end the war.

About the Author:  Ann Wright served 29 years in the U.S. Army/Army Reserve and retired as a Colonel.  She also served 16 years as a U.S. diplomat in Nicaragua, Grenada, Somalia, Uzbekistan, Kyrgyzstan, Sierra Leone, Micronesia, Afghanistan and Mongolia.  She resigned from the U.S. government in March 2003 in opposition to President Bush’s war on Iraq.  Since her resignation, she has returned to Afghanistan three times and to Pakistan once.