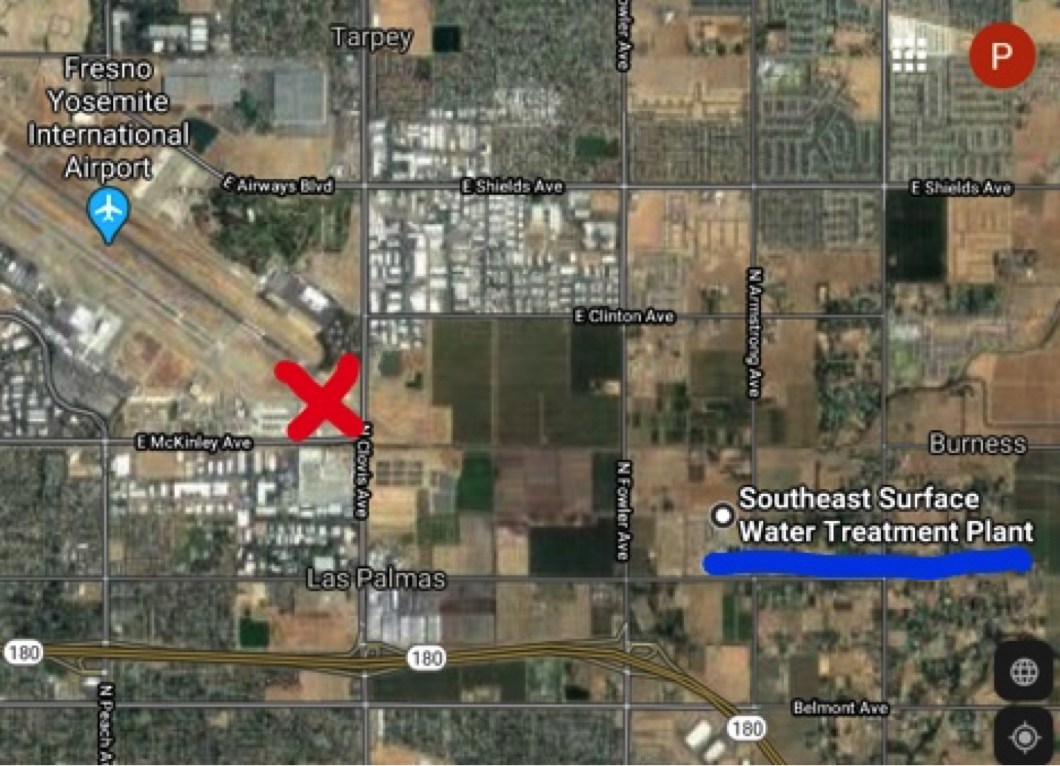 The Air Force’s fire training area and Fresno’s Water Treatment Plant are too close for comfort.

Fresno’s Southeast Surface Water Treatment Plant is located 7,500 feet from the former Fire Training Areas (FTA’s) used by the Fresno Air National Guard for 50 years – the same period the Air Force has been using carcinogenic fire-fighting foams containing per- and ply fluoroalkyl substances, (PFAS). One fire pit is located very close to the stormwater drainage area for the runway. Because the Air Force investigation (Final Site Inspection Report Air National Guard Phase II Regional Site Inspections for Per- and Polyfluoroalkyl Substances Fresno Air National Guard Base Fresno, CA March, 2019) took place during the dry season, surface water was not present when samples were collected. In any case, there are no surface water screening criteria because of the absence of state or federal guidance levels.

FTA’s were constructed as circular, 10-inch high, unlined earthen berms approximately 60 feet in diameter. Firefighters filled the craters with flammable liquids, including oil, jet fuel, various solvents, and gasoline. Up to 40,000 gallons of flammable material were used at one FTA over this time period. After igniting the materials for firefighting training, the flames were extinguished with AFFF.

AFFF was used liberally in several locations, including Building 157 which was fitted with a fire suppression system and supplied with the foam. These systems are engineered to fill a 2-acre hangar with 17 feet of foam in 2 minutes. The carcinogens were released during routine tests and the system also leaked. The “forever chemicals” were discharged to the sanitary sewer system, likely contaminating sewer sludge and wastewater applied to farm fields in the area.

People drinking from private wells in the area are ingesting the chemicals in horrific amounts because California does not regulate the millions of private wells throughout the state. To its credit, California has recently lowered its Response Level for PFOA and PFOS to 10 ppt and 40 ppt respectively, so the city water levels here are deemed OK to drink. If the levels exceed Response Levels, water providers must shut down the wells or properly treat the water. The Environmental Working Group says no one should be drinking more than 1 ppt of any variety of PFAS.

The other three types of PFAS shown above are not regulated. PFOS and PFOA are well-known eight-carbon chain chemicals found in AFFF widely used by the Air Force since 1970. Responding to public outcry, the Air Force has recently swapped out the older foams to what they call “environmentally responsible six carbon chain formulas” of AFFF. PFBS, PFHxS and PFHpA are such six carbon PFAS chemicals.

The health impacts of PFOS and PFOA have been in the public’s eye, but these other types of PFAS are likely to be just as lethal. Ironically, most European airports have switched to equally capable Flourine-Free Foams, (3F), or are in the process of doing so.

Prenatal exposure to PFHxS is associated with occurrence of infectious diseases such as ottis media, pneumonia, RS virus and varicella in early life. They’re all believed to be dangerous, persistent, and bioaccumulative. Additionally, the water-solubility of PFBS (found at a whopping 4,500 ppt) is higher than PFOS, which makes it more mobile and problematic if contaminated surface water is used as a drinking water source.

Thankfully, there are ways to filter out the chemicals, although they’re extraordinarily expense and must be regularly maintained. Sadly, Fresno’s population may have been ingesting high amounts of these chemicals for two generations.