CALL TO GLOBAL ACTION AGAINST ILLEGAL U.S. OCCUPATION OF GUANTÁNAMO 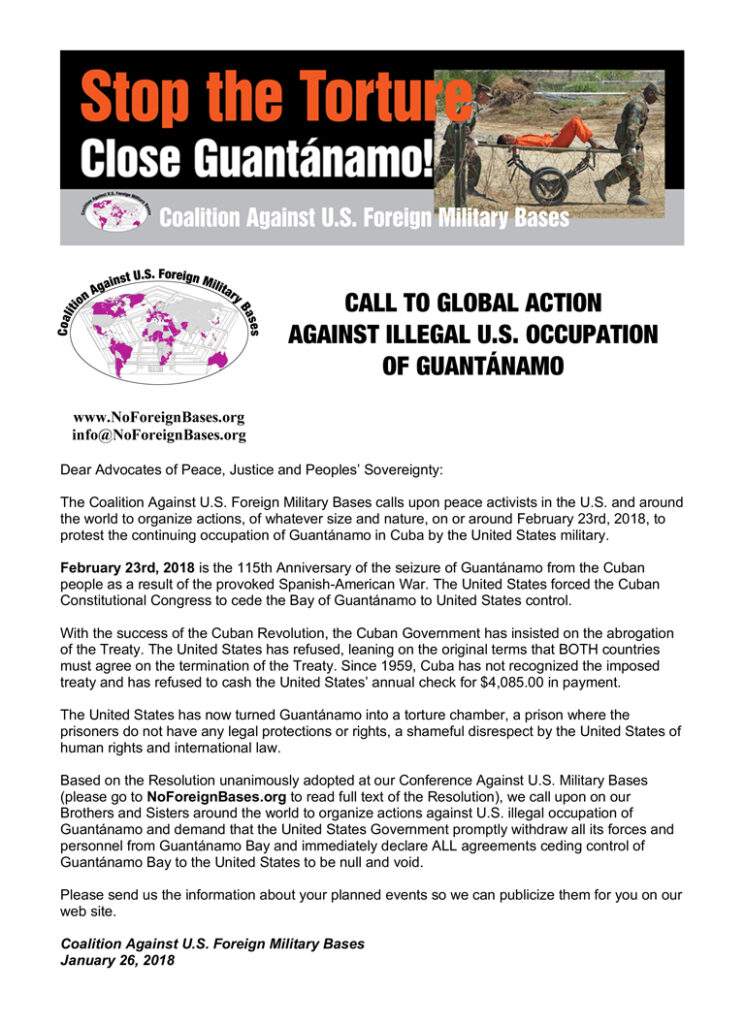 The Coalition Against U.S. Foreign Military Bases calls upon peace activists in the U.S. and around the world to organize actions, of whatever size and nature, on or around February 23rd, 2018, to protest the continuing occupation of Guantánamo in Cuba by the United States military.

With the success of the Cuban Revolution, the Cuban Government has insisted on the abrogation of the Treaty. The United States has refused, leaning on the original terms that BOTH countries must agree on the termination of the Treaty. Since 1959, Cuba has not recognized the imposed treaty and has refused to cash the United States’ annual check for $4,085.00 in payment.

The United States has now turned Guantánamo into a torture chamber, a prison where the prisoners do not have any legal protections or rights, a shameful disrespect by the United States of human rights and international law.

Based on the Resolution unanimously adopted at our Conference Against U.S. Military Bases (please go to NoForeignBases.org to read full text of the Resolution), we call upon on our Brothers and Sisters around the world to organize actions against U.S. illegal occupation of Guantánamo and demand that the United States Government promptly withdraw all its forces and personnel from Guantánamo Bay and immediately declare ALL agreements ceding control of Guantánamo Bay to the United States to be null and void.

Please send us the information about your planned events so we can publicize them for you on our web site.