I am in Guantánamo Bay. The US government is starving me to death 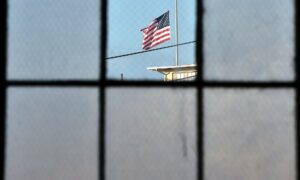 I haven’t had food in my stomach for 23 days. The 20 September was the day they told us they would no longer feed us. They have decided to leave us to waste away and die instead.

I am in so much pain every minute that I know it can’t go on much longer. Now as each night comes, I wonder if I will wake up in the morning. When will my organs fail? When will my heart stop? I am slowly slipping away and no one notices.

There is a man who is in charge of all the medical staff. I don’t know his name but they call him the senior medical officer. He was the one who called us all in and told us they would stop feeding us. As soon as he took over I knew he was bad news and now he has decided to end our lives.

I started hunger strike because I was so frustrated, so depressed – I have been locked up here so far from my family for 15 years. I have never been charged with a crime and I have never been allowed to prove my innocence. Yet I am still here. And now Donald Trump says that none of us – the 26 “forever” prisoners who have apparently committed no crime, but merit no trial – will ever leave here so long as he is in charge.

Some will say I brought the pain on myself. But how can that be? I did not ask to be brought here. I did not do anything that justified being kidnapped and hauled half way around the world. It is true that there have been times when I thought I would be better off dead. This was the only peaceful way I thought I could protest. What I really want, for me and for the other men here, is justice. Certainly, I never wanted to die in the pain I’m now in.

Just over a week ago, on 29 September, I collapsed and they called a “code yellow” – that’s what they call it. I’ve seen it before but this is the first time the code has been for me. Still I got no treatment. Still they continue to starve me. I can’t walk anymore. My hip joints are swollen and it is too painful. I am so tired and so weak.

The worst thing is, the medical staff aren’t recording anything. They don’t check how close I may be to death. The nurses are writing nothing down. They don’t reply when I ask them if they’ve recorded my missed meals. They should be there to care, but they don’t care.

These days have been the most terrifying of my 15 years in this place. We are used to torture here but this is so slow and so cruel. The people who are supposed to look after us are hurting us. I have been reduced to pleading for my life. I am asking for anyone out there to talk about what’s going on here. To ask why Trump is letting us slowly die. I don’t have many days left.

These words were dictated by Khalid Qasim from Guantánamo Bay to his attorney, Shelby Sullivan-Bennis. of the human rights organization Reprieve. Khalid Qassim has been held at Guantánamo Bay for 15 years. He has never been charged with a crime or had the chance to prove his innocence at trial.Khalid comes from a small town in Yemen and travelled to Afghanistan in search of work in 2000. He was detained by Afghan police and handed over the US forces in a case of mistaken identity. It emerged later that the US offered large financial incentives to local law enforcement to hand over Arab prisoners for interrogation.