H. G. Wells and the War To End War 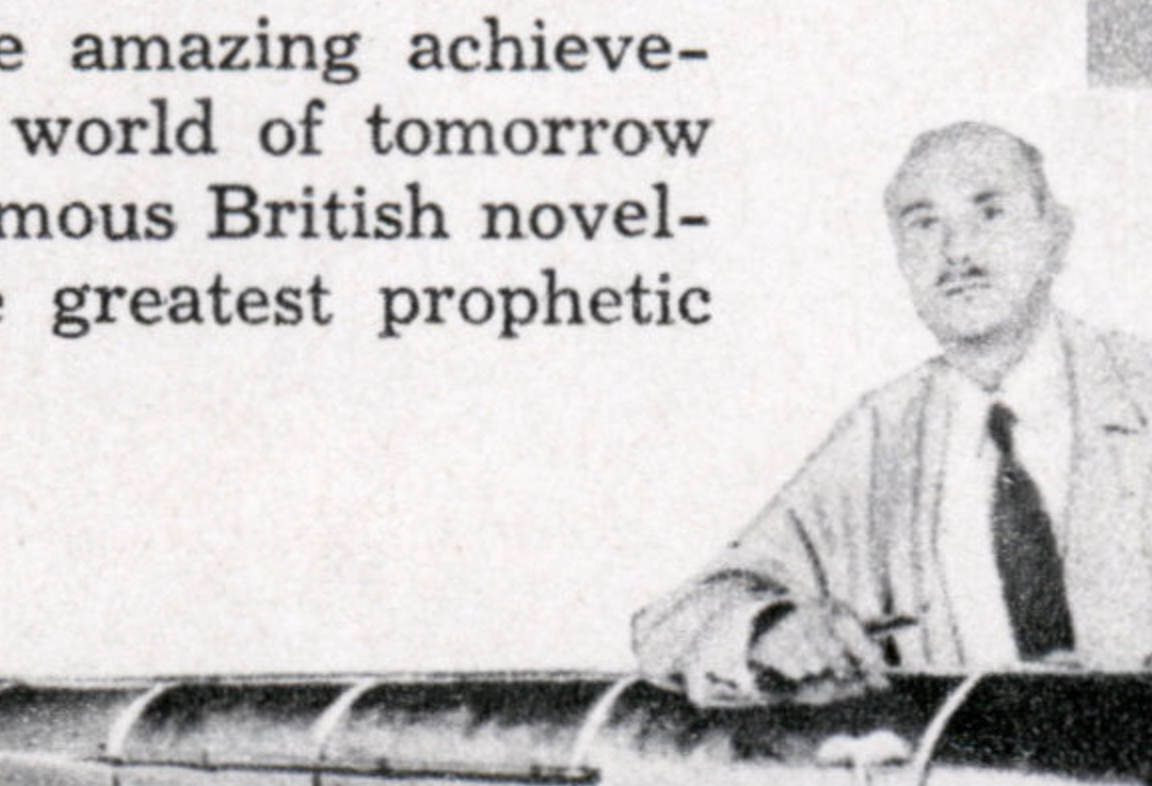 Possibly you’ve noticed that the war to end war didn’t.

It has become almost a cliché to observe that the Great War, which ended a century ago this week, served as the launching pad for almost everything of international consequence during the long and painful subsequent century. It led to the fall of three empires, the rise of two totalitarianisms, a second global war greater in expanse, horror and cruelty than the first, a nearly half-century-long “Cold War” between that war’s two leading victors, and the dawn of the atomic age. World War I, said the late Columbia University historian Fritz Stern, served as “the first calamity of the 20th century … the calamity from which all other calamities sprang.”

But one consequence, in the very long run, could prove greater than any of these. Because the Second World War, which followed so predictably from the First World War, gave rise to an almost completely forgotten movement to abolish war — through the political, institutional, and constitutional unification of humankind.

HOW COULD ANY WAR END WAR?

The contention that the Great War might serve as “the war to end war” is often associated with the American president during that conflict, Woodrow Wilson. But it, in fact, originated with the British socialist, feminist, futurist, popular historian and science fiction pioneer HG Wells, in a series of articles released just months after the eruption of the guns of August called The War That Will End War. Wells argued that the unprecedented scope and scale of this latest of an endless stream throughout history of international violent conflicts, combined with the globalization that seemed as relentless to the denizens of that age as it does to our own, presented the opportunity for humanity to find a way to govern itself as a single politically unified community.

War between national states, as well as the permanent military forces that all states maintained to defend themselves against the permanent military forces of other states, could be abolished by the creation of a supranational state. Wells hoped that the end of The Great War would bring about the final consummation of this idea, which had been articulated in centuries past by the likes of Victor Hugo, Alfred Lord Tennyson, Ulysses S. Grant, Baha’u’llah, Charlotte Bronte, Immanuel Kant, Jean Jacques Rousseau, Jeremy Bentham, William Penn, and Dante. “The myriads of little tribal systems of 10,000 years ago have fought and coalesced into the 60- or 70-odd governments of today,” said Wells, “and are now labouring in the grip of forces that must presently accomplish their final unison.”

Indeed, just weeks before the first shots of the Great War were fired, Wells published a novel called The World Set Free. It portrayed a future where the human race enjoys the benefits of abundant atomic energy that is virtually infinite and free, but then is devastated by a vast conflagration waged primarily with atomic weapons. It was the first appearance, in literature, of both nuclear weapons and nuclear war. But this catastrophic war is followed in the novel by the end of war, through the establishment of what Wells called here, and in other writings, “the world state.”

ONCE, THERE WAS A MOVEMENT TO END WAR

HG Wells died in 1946, deeply despondent about the human prospect in the wake of Nagasaki and Hiroshima. His atomic warfare had indeed come to pass … but it hardly seemed to have brought about the end of war. What it did bring was a brief but incandescent social movement, which proclaimed that the abolition of war — in the wake of the peril now posed to human survival by the prospect of global atomic war — was now both an absolute necessity and an achievable historical goal. How? By the final unison that Wells (prematurely) forecast – the enactment of a world constitution, the establishment of a democratic federal world government, and the end in the international arena of the philosopher Thomas Hobbes’s eternal “war of all against all.”

In the late 1940s, a moment that seemed to those living through it to hold both vast promise and infinite peril, a genuine worldwide social movement began to emerge, proclaiming that world government was the only possible solution to the new problem of nuclear weapons, and the ancient problem of war itself. In the years immediately following WWII the world government idea was heatedly discussed and debated in dormitories, cocktail lounges, dinner parties, and symposia of every sort. For about five years, the movement to bring about a world republic was every bit as much a social and political force as the women’s rights and gender identity and racial justice movements today, or the civil rights and anti-Vietnam War movements in the 1960s, or the labor movement and women’s suffrage movements in the first few decades of the 20th Century. Don’t believe it?

The National Debate Tournament topic for all American high schools in 1947-1948 was: “RESOLVED: That a federal world government should be established.” A handsome young American war veteran named Garry Davis pitched a tent on a small patch of UN territory in Paris in 1948, announced that “my country is the world,” and established a “world citizen registry” that attracted more than 500,000 enrollees. The president of the University of Chicago, Robert Maynard Hutchins, convened in 1947 some of the most prominent social intellectuals of the day, including professors from Stanford, Harvard, and St. John’s College, and grandly designated them “The Committee to Frame a World Constitution.” (The “preliminary draft” they later issued envisioned world leaders establishing a “Federal Republic of the World, to which we surrender our arms.”)  The American “United World Federalists” (UWF), which aimed specifically “to strengthen the UN into a world government,” had established 720 chapters and enlisted nearly 50,000 members before the end of the decade. (UWF still exists today, known today as “Citizens for Global Solutions,” with offices in Washington DC. It’s the American affiliate of the international “World Federalist Movement,” with offices in New York City.) And a 1947 Gallup poll showed that 56% of Americans supported the proposition that “the UN should be strengthened to make it a world government.”

The idea even attracted formal American legislative support. No less than 30 state legislatures in the US passed resolutions in favor of world government. And a 1949 joint resolution in the US Congress, which declared that “it should be a fundamental objective of the foreign policy of the United States to support and strengthen the United Nations and to seek its development into a world federation,” was cosponsored by 111 representatives and senators, including giants of the future American political landscape like Gerald Ford, Mike Mansfield, Henry Cabot Lodge, Peter Rodino, Henry Jackson, Jacob Javits, Hubert Humphrey, and John F. Kennedy.

Indeed, President Harry S. Truman was quite sympathetic to the world government winds that were so much a part of the zeitgeist during his presidency. Strobe Talbott, in his 2008 book THE GREAT EXPERIMENT: The Story of Ancient Empires, Modern States, and the Quest for a Global Nation, tells us that Truman throughout his adult life carried in his wallet Tennyson’s 1842 Locksley Hall verses about “the parliament of man, the federation of the world” – and recopied them by hand more than a dozen times. And when he was returning by train from San Francisco to Washington after signing the UN Charter on June 26, 1945, the president stopped off in his home state of Missouri, and said: “It will be just as easy for nations to get along in a republic of the world as it is for you to get along in the republic of the United States. Now when Kansas and Colorado have a quarrel over the water in the Arkansas River … they don’t go to war over it. They bring suit in the Supreme Court of the United States and abide by the decision. There isn’t a reason in the world why we can’t do that internationally.”

Occasionally today prominent individuals with a large historical vision put the idea of a world state on the table. “If you ever wanted an argument for world government, climate change provides it,” said Bill McKibben in 2017, arguably the most prominent environmental advocate in the world. In 2015, Bill Gates gave a wide-ranging interview to the German newspaper Suddeutsche Zeitung about the global landscape. In it, he said: “The UN system has failed … It was sad how the (UN climate change) conference in Copenhagen was run … We are ready for war … We have NATO, we have divisions, jeeps, trained people. But what is it with epidemics? … If there were such a thing as a world government, we would be better prepared.” And in 2017, the late Stephen Hawking said: “Since civilization began, aggression has been useful inasmuch as it has definite survival advantages … Now, however, technology has advanced at such a pace that this aggression may destroy us all … We need to control this inherited instinct by our logic and reason … This might mean some form of world government.”

But despite these outliers, the idea that something like a world federation might someday serve as the solution to the problem of war is conspicuous mostly by its absence from the public policy debate. Most people are neither for it nor against it, because most people have never thought about it, and may not have even heard of it. And the remarkable history of the idea – both during its zenith in those few short years after the Second World War and as articulated by many of history’s great thinkers in centuries past – is somehow almost completely unknown even to the historically literate and the politically engaged.

But the idea might yet rise again – for the same reasons that drove Wells to make “the world state” his most passionate cause and conviction a full century ago. While many Americans embrace the nationalism and tribalism and “America First” rhetoric of Steve Bannon, Stephen Miller, and Donald Trump, many others – both inside and outside the United States — insist that one’s allegiance to one’s nation can be accompanied by one’s allegiance to humanity, that the pursuit of national interests must be accompanied by some conception of common human interests, and that all of us on this fragile planet ought to consider ourselves, in the science fiction author Spider Robinson’s memorable phrase, as “crewmates on Spaceship Earth.”

“A federation of all humanity,” said HG Wells, “together with a sufficient measure of social justice to ensure health, education, and a rough equality of opportunity to most of the children born into the world, would mean such a release and increase of human energy as to open a new phase in human history.”

Perhaps, some distant day, that just might become the war that will end war.

Tad Daley is the Director of Policy Analysis at Citizens for Global Solutions, and author of the book APOCALYPSE NEVER: Forging the Path to a Nuclear Weapon-Free World from Rutgers University Press.