Hey Ireland, Your Ambassador Just Told Me You’ll Do Anything Trump Wants

Dear brothers and sisters of Ireland, your ambassador to the United States Anne Anderson spoke at the University of Virginia Tuesday afternoon.

After consulting one of your fine citizens named Barry Sweeney, I asked her this: “Since the U.S. government assures the Irish government that all U.S. military aircraft being refueled at Shannon are not on military operations and are not carrying weapons or munitions, and since the Irish government insists on this in order to comply with Ireland’s traditional policy of neutrality, why does the Irish department of transportation almost daily approve civilian aircraft on contract to the U.S. military to carry armed U.S. troops on military operations, weapons, and munitions through Shannon Airport in clear breach of international laws on neutrality?”

Ambassador Anderson replied that the U.S. government at the “highest levels” had informed Ireland that it was in compliance with the law, and Ireland accepted that.

So, the highest level of the U.S. government says that black is white, and Ireland says “Whatever you say, master.” I’m sorry, my friends, but with all due respect, my dog has a better relationship with me than you have with the United States.

We once had a former president named Richard Nixon who maintained that if a president does something it isn’t illegal. Apparently, Anderson takes a Nixonian view of the Trump regime.

Now, I understand that most of you may disagree with Anderson’s position, but she made very clear that she doesn’t give a rat’s rear what you think. During the course of her remarks she suggested that the ongoing French election and other recent elections were — thank goodness! — “containing the tide of populism.” You, my brothers and sisters, are the populace. Are you properly contained?

I asked Anderson a follow up question. She had spoken in support of amnesty or some sort of better treatment for undocumented Irish immigrants in the United States. I asked her whether she realized that hatred of immigrants in the United States is fueled by all the warmaking, in which Shannon Airport and Ireland are complicit. I got a blank stare.

So I asked her whether Ireland couldn’t help us out by being a model of peace. I got a look like she believed I just might have escaped from an asylum. She announced that she would be moving onto the next questioner. I’m sure John F. Kennedy, to whom she had devoted 90% of her remarks, would likewise have dodged such an inappropriate question.

Of course, Anderson had not mentioned Shannon Airport in her opening remarks at all, except to note that Saint JFK had taken off from there never to return. She took no pride in the Irish role in the endless wars that are ravaging the Middle East and threatening the earth. She preferred to pass over the whole subject in silence. But when asked about it, she simply said that anything the U.S. says is legal is legal, and left it at that.

Have yall heard some of the things that Donald Trump says are legal? If not, you’re in for a real treat. 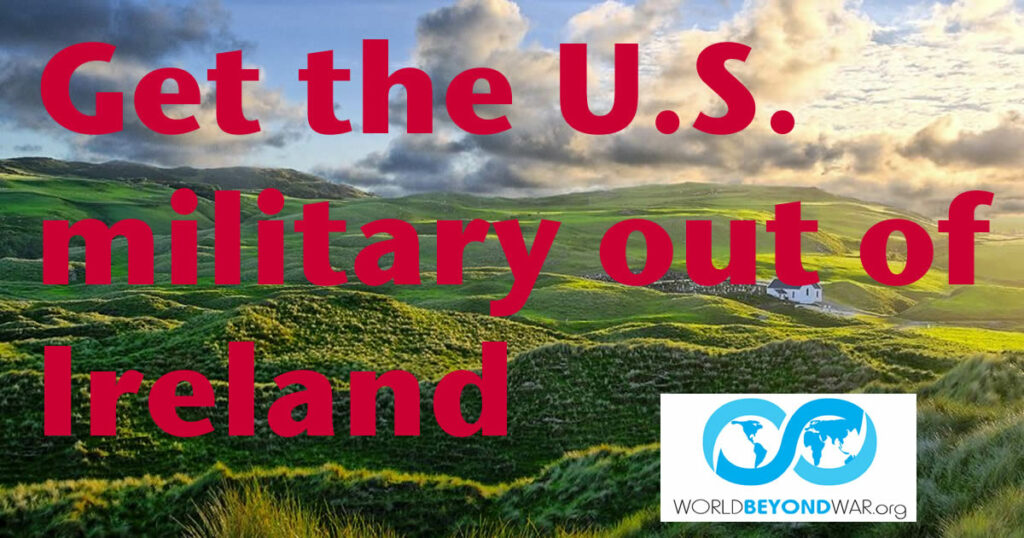 Those of us outside Ireland, and in particular those of us in the United States, have a pressing and urgent responsibility to lend all the support we can to our brothers and sisters in Ireland who are resisting U.S. wars.

Despite Ireland’s officially neutral status and its claim to have not gone to war since its founding in 1922, Ireland allowed the United States to use Shannon Airport during the Gulf War and, as part of the so-called coalition of the willing, during the wars that began in 2001. Between 2002 and the present date, over 2.5 million U.S. troops have passed through Shannon Airport, along with many weapons, and CIA airplanes used to transfer prisoners to places of torture. Casement Aerodrome has also been used. And, despite not being a member of NATO, Ireland has sent troops to participate in the illegal war on Afghanistan.

Under Hague Convention V in force since 1910, and to which the United States has been a party from the start, and which under Article VI of the U.S. Constitution is part of the supreme law of the United States, “Belligerents are forbidden to move troops or convoys of either munitions of war or supplies across the territory of a neutral Power.” Under the United Nations Convention Against Torture, to which both the United States and Ireland are parties, and which has been incorporated into very selectively enforced felonies in the U.S. Code since before George W. Bush left Texas for Washington, D.C., any complicity in torture must be investigated and prosecuted. Under both the U.N. Charter and the Kellogg-Briand Pact, to both of which the United States and Ireland have been parties since their creation, the war in Afghanistan and all the other U.S. wars since 2001 have been illegal.

The people of Ireland have a strong tradition of resisting imperialism, dating back even before the 1916 revolution of which this year is the centenary, and they aspire to representative or democratic government. In a 2007 poll, by 58% to 19% they opposed allowing the U.S. military to use Shannon Airport. In a 2013 poll, over 75% supported neutrality. In 2011, a new government of Ireland announced that it would support neutrality, but it did not. Instead it has continued to allow the U.S. military to keep planes and personnel at Shannon Airport, and to bring troops and weapons through on a regular basis, including over 20,000 troops already this year.

The United States military has no need for Shannon Airport. Its planes could reach other destinations without running out of fuel. One of the purposes of regularly using Shannon Airport, perhaps the main purpose, is very likely simply to keep Ireland within the coalition of the killing. On U.S. television, announcers thank “the troops” for watching this or that major sporting event from 175 countries. The U.S. military and its profiteers would hardly notice if that number dropped to 174, but their goal, perhaps their main purpose and driving objective, is to increase that number to 200. Total global dominance is the explicitly stated objective of the U.S. military. Once a nation is added to the list, all steps will be taken, by the State Department, by the military, by the CIA, and by any possible collaborators, to keep that nation on the list. The United States government fears an Ireland free of U.S. militarism more than we probably can imagine. The global peace movement should desire it more than we probably do, including for the example it would set to Scotland, Wales, England, and the rest of the world.

How do we, outside of Ireland, know anything at all about what the U.S. military does in Ireland? We certainly don’t learn it from the U.S. government or U.S. journalism. And the Irish government takes no active steps to reveal what it knows, which is likely not everything. We know what we know because of brave and dedicated peace activists in Ireland, representing majority opinion, upholding the rule of law, exercising creative nonviolence, and working through numerous organizations, most prominently Shannonwatch.org. These heroes have pried loose information, elected and lobbied members of the Irish legislature, entered the grounds of Shannon Airport to ask question and draw attention and face criminal prosecution for the cause of peace. If not for them, citizens of the United States — a nation that literally bombs other countries in the name of democracy — would have no idea what was happening whatsoever. Even now, most people in the United States have no idea. We have to help tell them. Even U.S. supporters of war don’t support a mandatory draft, at least not until they themselves are too old to qualify. Many should be willing to oppose forcing Ireland to take part in wars it wants no part in.

If U.S. military transport continues to make use of Shannon Airport, a disaster will inevitably occur there. Of course the moral disaster of participating in the mass killing of people in Afghanistan, Iraq, Syria, etc., is ongoing. The cultural disaster of insidiously creating the impression that war is normal is underway. The financial cost to Ireland, the environmental and noise pollution, the heightened “security” that erodes civil liberties: all of those things are part of the package, along with the racism that finds a target in the refugees fleeing the wars. But if Shannon Airport survives routine U.S. military use without a major accident, spill, explosion, crash, or mass-killing, it will be the first. The U.S. military has poisoned and polluted some of the most beautiful spots in the United States and around the world. The unsurpassed beauty of Ireland is not immune.

And then there is the blowback. By participating in counterproductive wars that generate international terrorism, Ireland makes itself a target. When Spain became a target it pulled out of the war on Iraq, making itself safer. When Britain and France became targets, they doubled down on their own participation in terrorism-too-large-to-carry-that-name, generating more blowback and deepening the vicious cycle of violence. Which path would Ireland choose? We cannot know. But we do know that it would be wisest for Ireland to pull out of its criminal participation in the barbaric institution of war before the war comes home.