Home of the “Hellhounds,” Whiteman AFB Drone Squadron ‘Most Lethal’ in U.S. 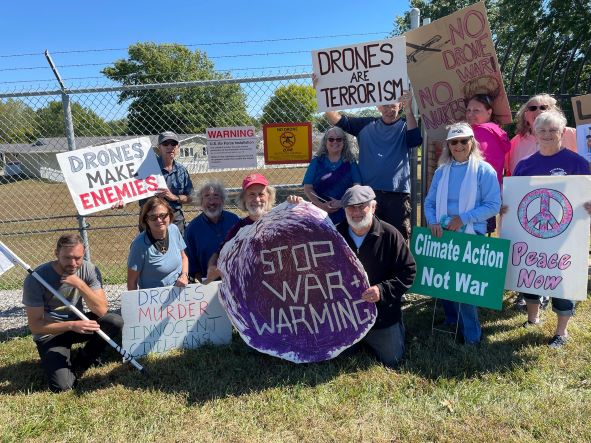 Leading up to this protest there was discussion among organizers about the nature of drone operations here at Whiteman Air Force Base. Is this a training facility, or are Reaper drones engaged in lethal activities, are actual murders committed from this place, in real time in places far away by remote control? While the details of drone operations are shrouded in secrecy, broken only by courageous whistleblowers, the Air Force exposes enough of itself for us to know that crimes with global consequences are being committed in this very place.

Every military unit has a nickname, and the 20th Attack Squadron goes by the name Hellhounds. “We are very humbled and appreciative to receive such a prestigious award,” said Lt. Col. Daniel, 20th Attack Squadron commander, adding, “Everyone in the Hellhound organization worked incredibly hard to help accomplish our mission.” Col. Stephen Jones said, “Through their dedicated support of Operation Freedom’s Sentinel, the 20th Attack Squadron became the US Air Force’s most lethal squadron, achieving a 97 percent strike effectiveness rating.”

The Air Force is not very forthcoming about what the Hellhounds actually do or where. Where in the world has the Hellhound organization worked so incredibly hard and to accomplish what mission? Who died to allow the 20th Attack Squadron to become the US Air Force’s “most lethal squadron,” and what does a “97 percent strike effectiveness rating” mean when we know from Air Force veteran and whistleblower Daniel Hale that fewer than 10 percent of people killed in the Reaper drone program are the intended targets?

The military loves to name its heroes and to publish accounts of daring courage, but it is mum about its drone strikes. Most often we hear nothing, and even in the rare instance when a lethal drone strike is announced or uncovered, it is never revealed who flew the drone, who launched the missile, under whose orders. Whether it is a colossal error, such as a year ago in August 2021 when ten members of the Ahmadi family, seven of them children, were killed in a drone strike in Kabul because the father was mistakenly identified as an ISIS-K terrorist, or in the assassinations of high-level targets like al Qaeda leader Ayman al-Zawahiri, killed with a drone missile while he stood on a balcony at his home last August, we never are told who to praise or blame. The drone crews are ordered not to speak of their missions even among themselves, their families and friends, much less to the public; they see the mayhem on high-resolution video from the safety of bases like this, thousands of miles away, but can speak of it to no one.

Six years ago, Missouri Sen. Claire McCaskill spoke to the Springfield News Leader about how “drone pilots operating from US bases often go home to their families after a day of conducting reconnaissance and deadly strikes on far-away targets, which can be a jarring transition.” McCaskill “said that during a visit with drone pilots at Whiteman last year, some airmen told her they preferred to work night shifts, so they could decompress before spending time with their spouses or children.”

So, what is going on at this base? We don’t really know, except that the Hellhounds, the 20th Attack Squadron based here at Whiteman Air Force Base in Missouri, has been lauded as the US Air Force’s “squadron of the year,” its “most lethal squadron.” We know that to qualify for this “prestigious award,” they killed a lot of people. Who these people were, in what countries they lived and died in, were they children or adults, killed on the battlefield or in their homes, deliberately or by accident and for what reason, even members of the US Congress are not informed. Who the Hellhounds of Missouri are hunting down and killing in our names this moment as we stand outside these gates, we may never know, either.

We have been coming here with these very questions for more than ten years now. Some of us have been arrested, a few of us imprisoned, pressing for answers. In the meantime, like a pestilence, the drones here and around the world have only multiplied and grown more lethal, swarming and harassing, not resolving any conflict but making peace only more elusive. In Ukraine today, Turkish-made TB-2 drones are in the fight on Ukraine’s side and Russia is deploying Iranian-made Shahed 136 drones, in a conflict that threatens to escalate into a nuclear war.

We have been invited here to protest drones, but this month is the 60th anniversary of the Cuban Missile Crisis, and it is fitting that we mark that occasion here today. The 20th Attack Squadron here is actually a geographically separated unit of the 432nd Air Expeditionary Wing of Creech Air Force Base in Nevada. Whiteman is home to the B-2 “Spirit” stealth bomber and the 509th Bomber Wing, keeping at least 136 nuclear bombs at the ready. “Execute Nuclear Operations and Global Strike … Anytime, Anywhere!” is the 509th’s mission statement.

Vladimir Putin’s threat to use nuclear weapons if Russian territory is attacked is dangerous, irresponsible, and it is indefensible. Even used as a bluff, such a threat itself is a crime against humanity. Never before has any nation threatened first use of nuclear weapons. None except for the United States, which has breathed that existential threat every day for decades. Ever since Hiroshima until now, the US has been the only nation to hold a first-use policy. The latest iteration of this threat, the 2022 Nuclear Posture Review and Missile Defense Review, says, “The United States would only consider the use of nuclear weapons in extreme circumstances to defend the vital interests of the United States or its allies and partners.”

The doctrine of “mutually assured destruction,” that a nuclear war has no winner, has kept an uneasy and deadly sort of “peace” for decades. It is now steadily eroding, fueled by the US trillion-dollar program of modernizing and “life extension” of its aging nuclear arsenal. Most of the non-nuclear parts of these new, more precise and deployable nuclear weapons are being made not far from here in Kansas City. “More precise and deployable” is another way of saying “more likely to be used,” and with these new, more flexible weapons on hand, US war planners are thinking up ways to use them. In a June 2019 report by the US Joint Chiefs of Staff, “Nuclear Operations,” it is suggested that “using nuclear weapons could create conditions for decisive results and the restoration of strategic stability … Specifically, the use of a nuclear weapon will fundamentally change the scope of a battle and create conditions that affect how commanders will prevail in conflict.” American war makers have decided that a nuclear war can be won after all, and Vladimir Putin seems to agree. The world is in more peril now than it was 60 years ago.

There is no time to lose. All circumstances today, especially exacerbated by the use of killer drones, rise to “extreme circumstances” that could lead to nuclear war, and the 509th Bomber Wing, right here at Whiteman, along with its Russian counterparts, no doubt, stands ready to “Execute Nuclear Operations and Global Strike … Anytime, Anywhere!” The resources needed to reverse global climate catastrophe and face growing pandemics are with us, in our grasp, but instead the nations of the world, the US first among them, choose to waste them at war.

If there was any reason to hold that preparing for and waging war can keep us safe in our homes, the rise of nuclear weapons and of weaponized drones has put an end to it. There is no choice but to disarm. Thank you for being here. It may seem small, but many small gestures like this can mean, quite literally, the world.

—Brian Terrell lives on a Catholic Worker Farm in Maloy, Iowa and is outreach coordinator for the Nevada Desert Experience. In 2012, he was arrested serving a letter of protest at Whiteman Air Force Base and served six months in federal prison.