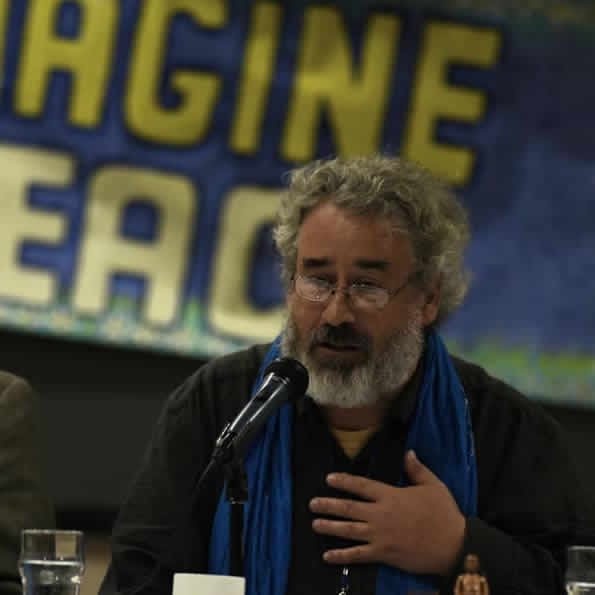 I am honored and humbled to be addressing this gathering at this perilous moment, especially as I am here in place of Kathy Kelly, who sends her love and her regrets that she can’t be here. Mairead Maguire just cited Dorothy Day as an influence in her life- Dorothy took me in when I was a teenage dropout long ago. I stayed at the Catholic Worker in New York then for four years and this made all the difference in my life.

The stark reality that we are facing, even the imminent threat extinction, cannot be clearer than it is today and our work cannot be more crucial.

Just short of 18 years ago, on October 7, 2001, B-2 Stealth bombers from Whiteman Air Force Base in Missouri were the first U.S. forces to invade Afghanistan, dropping bombs over Kabul. Despite the fact that no Afghans were involved in and very few Afghans were even aware of the terrible events in New York and Washington three weeks before, only one member of the U.S. Congress voted against authorizing this aggression, Representative Barbara Lee, who counseled that by going to war, the U.S. might “become the evil that we deplore.”

Vice-President Richard Cheney made a similar prediction, that the war that began that day “may never end” but would “become a permanent part of the way we live.” “The way I think of it is, it’s a new normalcy,” Cheney told reporters, intimating that plans being made to spread the war to forty to fifty other countries. The same future of permanent war that Rep. Lee warned against as a dystopian horror, Vice President Cheney optimistically hailed as a bright new era of unlimited opportunities.

18 years later, with the same 2001 authorization of use of force that devastated Kabul still in place, the U.S. military is conducting so-called “counterterror” activities in 76 countries and the war has exceeded both Lee’s and Cheney’s expectations. As Pope Francis has pointed out, World War III has already begun, “spread out in small pockets everywhere… fought piecemeal, with crimes, massacres and destruction.”

Our friend Hakim who is here with us has called the talks between the U.S. and the Taliban that imploded in Doha this summer a “cruel charade” that only pretended to offer a chance at peace. This global war that began with bombs over Kabul is not intended to be won, be resolved or even contained in any way, but is carried out for the purpose of perpetuating it. The cost of this war in deaths and in dollars and the fact that it is resulting in even more insecurity and more terrorism is not lost on those who stand to profit from it.

Today there is a growing recognition of the connections between war and the environment, too often ignored or denied by earlier generations of environmentalists, and this is a good thing, as war is the driving force of climate disruption. The extinction of our species, it might be said, is already going on, in the margins, and the thousands dying now in the war that Saudi Arabia and the UAE are waging Yemen for dwindling oil reserves are among the victims of climate change already. Decades of progress toward nuclear disarmament are being reversed, now as trillions of dollars are being robbed and spent on developing the next generation of nuclear bombs. The world is in the throes of what Dr. King called “the fierce urgency of now.”

The climate activist Greta Thunberg refuses to be labeled either as an optimist or a pessimist. “I am a realist,” she insists. “If we do the change that is required, then we will prevent this from happening and we will succeed. But if we don’t, then there will be horrible consequences.”

Believing that it is possible for human beings to live at peace with each other and the world, to share resources equitably, and convert to sustainable and renewable energy, is not a utopian dream and it never has been. A world without war and exploitation is the only option. It is the hard, cold, reality that the world needs to face today. It represents the ultimate pragmatism. The belief that many cling to against all evidence, that the world can go on pretty much as it has without drastic changes, is the an unrealistic dream, a conceit that will be the end of us if we can’t wake from it. What Dr. King said 50 years ago, that the choice is not between nonviolence and violence, but rather between nonviolence and nonexistence is coming to fruit in our time. Our theme this morning is “Nonviolence: The Foundation of Peace,” but nonviolence will also be the foundation human existence, if human existence is to have any future worth considering.

While optimism might be a useless or even a dangerous distraction in our times, I still hold out for hope, but real hope never comes easy or cheap. “Hope is something you need to deserve,” Thunberg has said, “you have actually done something.”

In 1959, in a rare cold war correspondence between two poets, Thomas Merton in the U.S. and Czselaw Milosz in Poland, Merton also warned against optimism and cheap hope: “If [we] are not nearly in despair there is something the matter. … We should all feel near to despair in some sense because this semi-despair is the normal form taken by hope in a time like ours. Hope without any sensible or tangible evidence on which to rest. Hope in spite of the sickness that fills us. Hope married to a firm refusal to accept any palliatives or anything that cheats hope by pretending to relieve apparent despair. Hope must mean acceptance of limitations and imperfections and the deceitfulness of a nature that has been wounded and cheated. We cannot enjoy the luxury of a hope based on our own integrity, our own honesty, our own purity of heart.”

It has been said, too, that people don’t act because they have hope, but they have hope because they act. We have hope if we deserve it and each of us need to find our own way to hope. It has been my privilege to be able to spend some time in places and with communities of people in crisis, among those most endangered by economic exploitation, war and climate collapse, places where hope has no “sensible or tangible evidence on which to rest,” but it is in these places and with these people that I have found hope, just as the most privileged, educated and powerful people on the planet are also often the most clueless and helpless. “Social betterment,” Gandhi insisted, “never comes from parliaments, or pulpits, but from direct action in the streets, from the courts, jails and sometimes even the gallows.” Nonviolent direct action, as taught to us by Jesus, Gandhi, the walkers and peace volunteers in Afghanistan, to name a few, is the most realistic and practical hope for the world today.