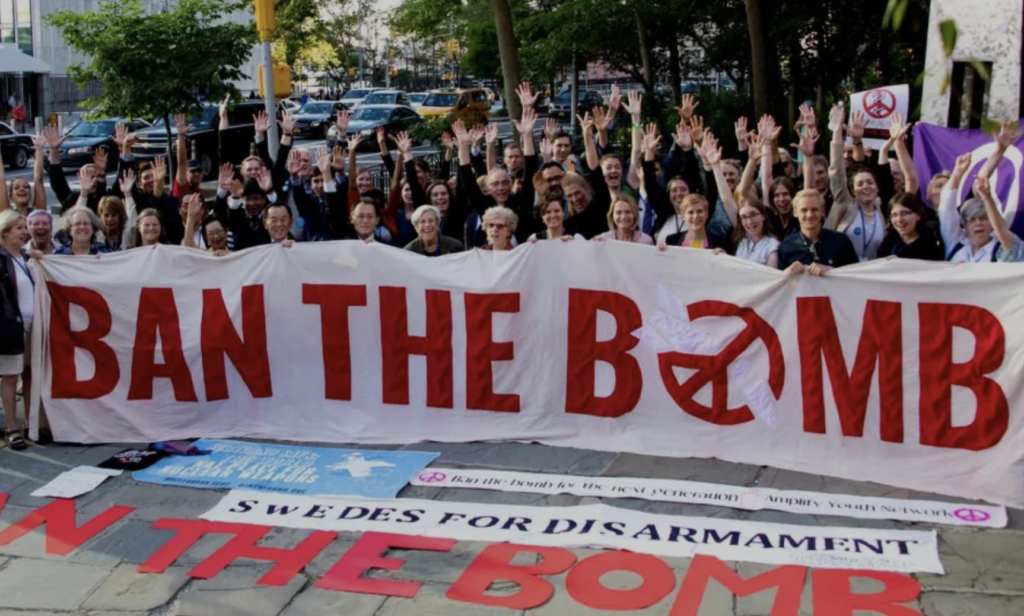 On July 7, 2017, the world made history. Surrounded by atomic-bomb survivors, antinuclear activists, members of the Red Cross, and UN officials, 122 governments adopted a new international law banning nuclear weapons. The Treaty on the Prohibition of Nuclear Weapons (TPNW) outlaws all nuclear weapon-related activities, sets out measures for disarmament, addresses victim assistance and environmental remediation, demands that women play an equal role in arms reduction, and acknowledges the disproportionate impact these weapons have had on women and indigenous peoples. Its adoption was groundbreaking. As Setsuko Thurlow, atomic-bomb survivor from Hiroshima, said in her concluding remarks, “This is the beginning of the end of nuclear weapons.”

Yes, nuclear weapons still do exist. Yes, the handful of countries that possess them are still pouring billions of dollars a year into their renewal and expansion. Yes, the leaders of the nuclear-armed states—and their allies that support their possession of nuclear weapons—continue to say they will “never” join the treaty. But this is the same environment in which the nuclear-ban treaty was negotiated and adopted. And it the same hubristic attitude by nuclear-armed states toward international law, human security, and the survival of the planet that has prevented nuclear disarmament for more than seven decades. It is this attitude that has facilitated a new arms race and that those supporting the prohibition of nuclear weapons sought to disrupt.

On the one-year anniversary of the TPNW’s adoption, there is time for celebration but not self-congratulation. Just like the critics warned, this treaty has not magically eliminated nuclear weapons. But we always knew it would be difficult to eliminate nuclear weapons, and, after just one year, the treaty is showing results.

First, the nuclear-ban treaty has opened space for reviving the antinuclear movement, including by engaging a new generation of activists. Last year the International Campaign to Abolish Nuclear Weapons (ICAN) was awarded the Nobel Peace Prize for helping to drive the process for the TPNW. This prize, which reflects the relentless efforts for nuclear disarmament over generations, has generated additional interest and attention for campaigning against the bomb. Recently, demonstrations have broken out across Europe, with blockadesat Germany’s Büchel nuclear-weapon base; and gatherings across the United Kingdom by activists demanding the government sign the TPNW—including by chaining themselves to the railings of the House of Commons and encouraging the Church of England to support the ban. Many activities are planned in Brussels and elsewhere in Europe ahead of the next North Atlantic Treaty Organization (NATO) Summit, to be held July 11–12. In the United States, nuns have been distributing information about the TPNW to nuclear-weapon facilities and missile silos; while queer-identified campaigners have been active spreading the word about the nuclear ban at Pride events. In Australia, activists have been meeting with trade unions and student groups and are now preparing to take ICAN’s Nobel medal on a bike ride from Melbourne to Canberra to raise awareness about the TPNW and demand the Australian government sign it.

Meanwhile, campaigners in countries that voted for the adoption of the treaty—particularly those across the Global South—are actively working with their governments to ensure a smooth ratification process. So far, 59 states have signed and 10 have ratified the TPNW. Once 50 ratifications are reached, the treaty will enter into force. The rate of ratification is currently faster for the TPNW than any other multilateral WMD treaty, including the Non-Proliferation Treaty, the Comprehensive Nuclear Test Ban Treaty, and the prohibitions on biological and chemical weapons. The next signing ceremony will be held on September 26, 2018, but several governments will be joining the treaty even before then. Recently, Switzerland’s first chamber of parliament voted to join the TPNW, and New Zealand’s Cabinet has decided it will ratify the treaty. Others throughout Latin America, Africa, Southeast Asia, and the Pacific have indicated that they are well underway with the parliamentary and legislative processes necessary to secure ratification.

ICAN campaigners have also been actively working with parliamentarians, mayors, and other city officials to promote the TPNW and encourage local and federal support for the treaty. Thanks to civil-society efforts, bank finances, and government pension funds are being divested from nuclear weapons across Europe. Recently, major Belgian bank KBC announced it would exclude all nuclear-weapon producers from investment; Deutsche Bank announced it has expanded its exclusion of “controversial weapon systems” to include nuclear-weapon companies; and Norway and the Netherlands have divested their pension funds. Activists in cities and towns across the United States are encouraging their cities to comply with the TPNW and to divest city pension funds from nuclear weapons. In Spain, the mayor of Madrid has voiced her support for the TPWN, while the city council of Toronto has called on the Canadian government to join the ban. ICAN’s Parliamentary Pledge, through which elected representatives commit to getting their government to join the TPNW, already has over 950 signatures in more than 30 countries. In the US, Eleanor Holmes Norton, the non-voting delegate to the House from Washington, DC, has endorsed the pledge.

Campaigners are also working to make sure that the treaty is front and center on the world stage at critical moments. While it remains to be seen what might come of the process that began with the historic meeting between South Korean President Moon Jae-in and North Korean leader Kim Jong-un in terms of peace and denuclearization on the Korean peninsula, it is an opportunity to showcase the TPNW as an instrument for both. At a press conference on the margins of the Singapore Summit between North Korea and the United States, ICAN presented a concrete plan for removing nuclear weapons and threats of their use in the region, calling on North and South Korea, as well as the United States, to join the nuclear ban.

There are plenty more opportunities to ensure that the TPNW has the impacts on nuclear weapons that its negotiators intended it to. We are calling on NATO member states to use their next summit to discuss changing NATO’s doctrine away from reliance on nuclear weapons and toward implementing their repeated commitments to nuclear disarmament. Ahead of the summit, Harvard Law School’s International Human Rights Clinic has prepared new publications showing that existing security agreements for NATO and other US allies do not prevent these states from joining the nuclear ban. The obstacles are not legal, they are only political—and as European populations are once again raising their voices to demand disarmament, it’s in NATO states’ best interest to join the treaty as soon as possible.

Some NATO states, and others, are having national conversations about their relationship with nuclear weapons. This is another impact of the TPNW: The treaty process has renegotiated the boundaries of how we talk about nuclear weapons. Three conferences hosted by Norway, Mexico, and Austria in the lead-up to the nuclear-ban negotiations provided the space for governments, international organizations, and activists to build the case for prohibiting weapons that cause indiscriminate harm to civilians, civilian infrastructure, and the environment. Framing the issue this way helped undermine the dominance of theories of deterrence and security. It has also meant that new perspectives and voices are being heard. Representatives of some Pacific-island or Caribbean nations are speaking out against nuclear-armed countries, some of which have tested bombs on their territories and their peoples. The new discourse has contextualized—and problematized—the nuclear-armed states’ claims to power and authority against broader concerns about colonial legacy, racial justice, indiscriminate violence, sustainable development, economic justice, gender equality, and more.

To those who say the nuclear ban is not effective, or that it has had a negative impact on international relations, I say, this treaty is what we make of it. It was an honest effort to change the world, but it is up to all of us who truly desire the abolition of nuclear weapons, who want to see a safer, more secure world based on equity and respect, to take this treaty and make it work for us. As Setsuko Thurlow said in her heartfelt speech on July 7 last year, “To the leaders of countries across the world, I beseech you, if you love this planet, you will sign this treaty!”

Ray Acheson is the director of Reaching Critical Will, the disarmament program of the Women’s International League for Peace and Freedom. She represents the WILPF on the international steering group of the International Campaign to Abolish Nuclear Weapons.