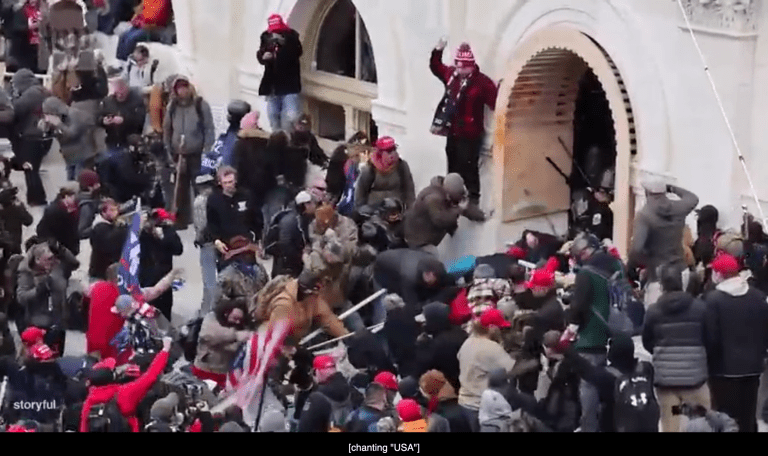 Eleven years ago, the Onion reported that the U.S. flag had been recalled after causing 143 million deaths. Last week, a Trumpy beat a Capitol Police officer with a pole holding a U.S. flag.

At first glance this seems like an amateur move. If you want the flag to maintain its power to mobilize the slaughter of men, women, children, and infants abroad, you shouldn’t actually beat cops with it at the U.S. Capitol. That might be so bad for the brand that major reliable supporters start deserting.

But it occurred to me that there must be another move. After all, this flag beater was clearly a professional. Consider the following. The guy who dragged the victim over to be beaten with the flag pole was wearing a white hat. The flag was properly flown for emergencies: upside down. Blood was kept off the sacred flag. The flag beating was accompanied by the holy trinity of mantras: (1) USA! USA! (2) Take him out! and (3) The Star Spangled Banner. Nobody was (voluntarily) kneeling. The flag beating was accompanied by an enraged mob of very proper skin tones, plus Trump flags, plus beatings with not only poles but also crutches, symbolizing both a willingness to trick the naive liberals and a hatred of the handicapped.

You don’t get much more professional. So, what can this flag beater have been thinking?

Then it occurred to me:

During the Capitol Coup Attempt and ever since, how many people have noticed that the President Elect wants to nominate a leading (foreign) coup instigator for high office?

Who’s been paying attention to weapons sales to Saudi Arabia and the United Arab Emirates?

Lloyd Austin just revealed exactly how much money Raytheon is still bribing, er rewarding, er paying him, and who cares?

Plus, Trump is in a major bind and looking at a possible quick start to a war on Iran, which could break all world records for deaths by a single flag.

Meanwhile, liberals and progressives are perfectly reliably declaring, not that the flag should be recalled, but that certain people have misused and sacrilegiously abused the flag, which must be celebrated ever more and used properly (keeping all the victims far from the world’s greatest democracy).

The fascist nincompoops with the misspelled posters and very vaguest notions of how anything works are evidently playing 12-dimensional chess again.

Try to keep up, people!