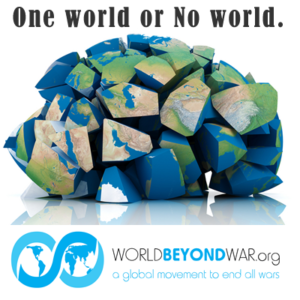 A serious case has been made repeatedly by unknown scholars and globally celebrated geniuses for well over a century that a likely step toward abolishing war would be instituting some form of global government. Yet the peace movement barely mentions the idea, and its advocates as often as not appear rather naive about Western imperialism; certainly they are not central to or well integrated into the peace movement or even, as far as I can tell, into peace studies academia. (Here’s a link to one of the main advocacy groups for world government promoting a U.S. war on ISIS.)

All too often the case for world government is even made in this way: Global government would guarantee peace, while its absence guarantees war. The silliness of such assertions, I suspect, damages what may be an absolutely critical cause. Nobody knows what global government guarantees, because it’s never been tried. And if national and local governments and every other large human institution are any guide, global government could bring a million different things depending on how it’s done. The serious question should be whether there’s a way to do it that would make peace more likely, without serious risk of backfiring, and whether pursuing such a course is a more likely path to peace than others.

Does the absence of world government guarantee war? I haven’t seen any proof. Of 200 nations, 199 invest far less in war than the United States. Some have eliminated their militaries entirely. Costa Rica is not attacked because it lacks a military. The United States is attacked because of what its military does. Some nations go centuries without war, while others seemingly can’t go more than half an election cycle.  In their book One World Democracy, Jerry Tetalman and Byron Belitsos write that nations do not go to war because they are armed or inclined toward violence but because “they are hopelessly frustrated by the fact that they have no legislative or judicial forum in which their grievances can be heard and adjudicated.”

Can you, dear reader, recall a time when the U.S. public had a grievance with a foreign country, lamented the absence of a global court to adjudicate it, and demanded that Congress declare and the Pentagon wage a war?  How many pro-war marches have you been on, you lover of justice? When the Taliban offered to let a third country put Bin Laden on trial, was it the U.S. public that replied, “No way, we want a war,” or was it the President? When the U.S. Vice President met with oil company executives to plan the occupation of Iraq, do you think any of them mentioned their frustration at the weakness of international law and arbitration? When the U.S. President in 2013 could not get Congress or the public to accept a new war on Syria and finally agreed to negotiate the removal of chemical weapons without war, why was war the first choice rather than the second? When advocates of world government claim that democracies don’t wage war, or heavily armed nations are not more likely to wage war, or nations with cultures that celebrate war are not more likely to wage war, I think they hurt their cause.

“War is a crime, yes agreed totally, but Man-made Global Warming is a complete scam.  I know this to be a fact.  Aurelio Peccei, co-founder of the Club of Rome, offered me a job as one of his PAs (my uncle, Sir Harry, later Lord Pilkington went to the first ever Bilderberg Conference in 1954, a year before he came a Director of the Bank of England and was a loyal member of the global corporate elite) and he told me that this was all a scheme to help frighten the world into accepting global governance on their terms. Be very careful, you are unwittingly playing their game.
Best wishes
Justin”

One of the huge advantages of global government would seem to be that it might globally address global warming. Yet the horror of global government is so great that people believe the droughts and tornados destroying the earth all around them are somehow a secret plot to trick us into setting up a world government.

A half-century ago the idea of world government was acceptable and popular.  Now, when we hear about those days it’s often in sinister tones focused on the worst motivations of the worst players at the time. Less common are accounts reminding us of a hopeful, well-meant, but unfinished project.

I think advocates for a world federation and global rule of law are onto an important idea that ought to be pursued immediately. Global warming leaves us little time for taking on other projects, but this is a project critical to addressing that crisis. And it’s a project that I think can coexist with moving more power to provinces, localities, and individuals.

The bigger the Leviathan, claims Ian Morris, the less war there will be, as long as the Leviathan is the United States and it never stops waging wars. Advocates of world government tend to agree with the first part of that, and I think they’re partially right.  The rule of law helps to regulate behavior.  But so do other factors. I think Scotland could leave the UK or Catalonia leave Spain, Quebec leave Canada, Vermont leave the United States without the chance of war increasing. On the contrary, I think some of these new countries would be advocates for peace. Were Texas to secede, that might be a different story. That is to say, habits of peace and cultures of peace necessary to allow a world federation might render such a federation less necessary — still perhaps necessary, but less so. If the U.S. public demanded peace and cooperation and participation in the International Criminal Court, it would be ready to demand participation in a world federation, but peace might already have — at least in great measure — arrived.

Extreme national exceptionalism, which is not required by nationalism, is clearly a driver of war, hostility, and exploitation. President Obama recently said that he only wakes up in the morning because the United States is the one indispensible nation (don’t ask what that makes the others). The theme of his speech was the need to start another war. Republican presidential candidate Ron Paul was once booed at a primary debate, not for opposing war, but for suggesting that the golden rule be applied to relations with foreign countries. Clearly we need to become world citizens in our minds as well as in written law.

Rudolf Gelsey recently sent me his book, Mending Our Broken World: A Path to Perpetual Peace, which led me on to Tetalman and Belitsos’s book. I think these authors would benefit from the wisdom of the 1920s Outlawry movement, but I think they do an excellent job of recognizing the successes and failures of the United Nations, and proposing reforms or replacement.  Should we be scared of an international rule of law? Tetalman and Belitsos reply:

“In truth, living under a system of war and anarchy with WMDs readily available for use on the field of battle — that is the really frightening choice when it is compared with tyranny.”

How do we get there? Tetalman and Belitsos recommend abolishing the veto at the United Nations, expanding Security Council membership, creating a tax base for a U.N. that currently receives about 0.5 percent what the world invests in war, and giving up war powers in favor of U.N. policing. They also propose kicking out of the United Nations any nations not holding free elections, or violating international laws. Clearly that would have to be a requirement going forward and not enforced retroactively or you’d lose too many big members and spoil the whole plan.

The authors envision some transition period in which the U.N. uses war to prevent war, before arriving at the golden age of using only police. I’m inclined to believe that imagined step would have to be leapt over for this to work. The U.S./NATO/U.N. have been using war to rid the world of war for three-quarters of a century with a dismal record of failure. I suspect the authors are also wrong to propose expansion of the European Union as one way to get to a global federation. The European Union is the second greatest purveyor of violence on earth right now. Perhaps the BRICS or other non-aligned nations could begin this process better, which after all is going to require the United States either rising or sinking to humility unimaginable today.

Perhaps a federation can be established only on the question of war, or only on the question of nuclear disarmament, or climate preservation. The trouble, of course, is that the willingness of the dominant bullies to engage in one is as unlikely as, and intimately connected to, each of the others. What would make all of this more likely would be if we began talking about it, thinking about it, planning for it, dreaming it, or even just hearing the words when we sing John Lennon songs. The U.S. peace movement is currently drenched in nationalism, uses “we” to mean the U.S. military, and thinks of “global citizen” as a bit of silly childishness. That needs to change. And fast.