Incomprehensible: Surplus Army Pistols to be Sold to the Public 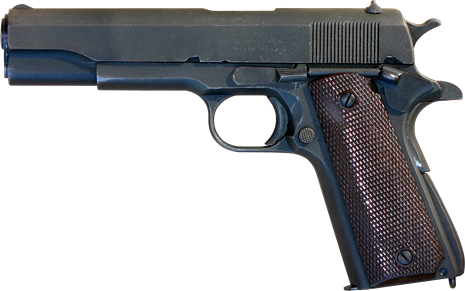 When Congress approved the annual National Defense Authorization Act (NDAA) in mid-November, it authorized the sale of surplus Army pistols to the public.

8,000 .45 caliber M1911 pistols will be available for sale in 2018 and 10,000 in 2019. After that, the remaining stock of 100,000 military surplus handguns may become available for purchase.The sales will be made through the congressionally-chartered Civilian Marksmanship Programor CMP.

President Obama earned the praise of the NRA when he signed the NDAA two years ago. The measure authorized the Army to release up to 10,000 of the estimated 100,000 surplus 1911s to the CMP during a one-year pilot program. Obama apparently blocked the weapons transfer after the Army questioned the sale of 100,000 “untraceable” handguns, calling them “popular crime guns.”

Obama’s Justice Department published a paper, obtained by the Huffington Post, saying the guns would eventually end up arming criminals. The DOJ argued, “The Army is concerned about loss of accountability of weapons after transfer to CMP; expanding the scope of CMP’s mission to include handguns; and the potential negative impacts on public safety from the large amount of semi-automatic and concealable pistols that will be released for public purchase.”  The Army cited DOJ statistics that is has tracked an average of nearly 1,800 Colt .45s being used in crimes every year over the last decade, including a significant number of those guns that were originally military surplus.

President Trump’s new Secretary of the Army Mark Thomas Esper, a former top Raytheon lobbyist, is expected to quickly order the shipment of pistols from the Anniston, Alabama Army Depot to the privately-owned CMP, also headquartered in Anniston. Many of the handguns have been in storage since 1985 when the Army replaced the M1911 with the Beretta M9. A cursory examination of several online gun dealers shows vintage Colt 45’s are available from $500 to more than $2,000 apiece. At $500 each, the CMP could gross $50 million.

The CMP has been re-circulating military firearms since its inception in 1903, although this is the first time the organization has been allowed by Congress to sell handguns. The CMP was established as an agency of Congress in 1903, ostensibly to train American citizens in marksmanship. In 1996, Congress reconstituted the CMP as the privately-owned, non-profitCorporation for the Promotion of Rifle Practice and Firearm Safety, Inc. The CMP is a prolific small arms and ammunition dealer that sells discarded military weaponry at discounted prices to the public.

When Congress privatized the agency in 1996 after Republicans took control of both chambers, Senator Paul Simon (D-IL) described the CMP as “an incomprehensible, irresponsible, baffling boondoggle for the NRA.

Simon teamed up with New Jersey Democrat Frank Lautenberg attempting to stop the transfer of guns and ammunition from the Army to the new private entity. “The [CPM..] funneled cash, weapons, and ammunition to private gun clubs, thanks to the power of the NRA,” said Simon. The Army should destroy outmoded weapons, Simon argued.

In 1999, it was discovered that the CMP had recklessly sold up to 2,000 rifles to just about anyone. The GAO found that the CMP failed to adhere to measures that purchasers were not convicted of felonies. Sen. Lautenberg lamented, “The GAO investigation showed that privatization meant the end of Army controls on gun buyers, so even felons could purchase M-1 rifles.”

The creation of the revamped CMP in 1996 raises questions regarding the authority of Congress to privatize roles that are essentially governmental in nature.  The CMP is unique because it straddles the line between public and private. When the corporation dissolves, its assets are to be merged with the US Treasury.  However, the CMP was established “as a private corporation, not a department, agency, or instrumentality of the United States Government.”  The whole thing started on legally questionable grounds.

According to its 2014 Form 990, the Corporation for the Promotion of Rifle Practice and Firearm Safety, Inc. has assets of $222.7 million and holds $166.8 million in publicly traded securities. It received $17.9 million in weaponry from the federal government in 2014 and has received nearly $100 millions in guns and ammo during the 5-year period from 2010 to 2014.

The CMP’s 990 says the corporation develops curriculum for marksmanship and safety instruction, trains and certifies JROTC coaches, inspects high school firing range facilities, “at no cost to the government.” The corporation spent just $257,000 on the above items, much less than the $381,000 compensation received by its Chairman and CEO, Judith A Legerski. The corporation spends an average of $142 per high school shooting program on safety and inspections while coming under fire for allowing lead contamination associated with the firing ranges.

Pat Elder serves on the Coordinating Committee of World Beyond War and is the author of Military Recruiting in the United States.