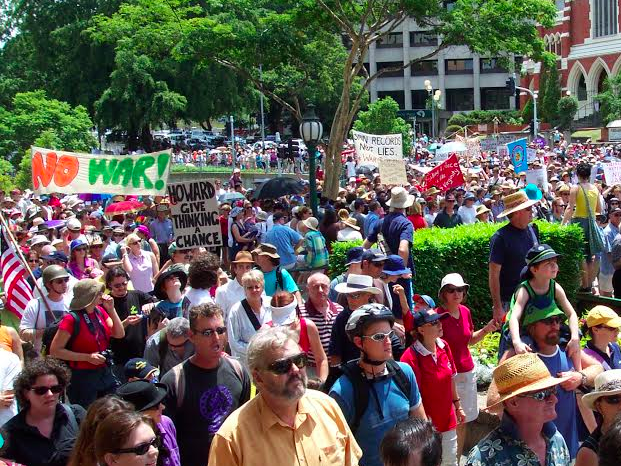 The fifth conference of the Independent and Peaceful Australian (IPAN) Network was recently held in Darwin on 2-4 August. I attended, feeling it was important to contribute and represent New Zealand, with the support of World Beyond War and Anti Bases Campaign.

It was my third IPAN conference and this time I was the only New Zealander. I was asked to update the conference about what is happening in the peace movement in Aotearoa, New Zealand, and I also talked about the importance of addressing the consequences of colonisation and of working together effectively and sustainably.

My brief mihi and pepeha in Te Reo Maori resonated with the local elders, and I finished my talk with a rendition of ‘Blowing in the Wind’ co-led by a colleague with audience participation,as we often do at home.

The conference was entitled ‘Australia at the Cross Roads”. IPAN is a relatively young but active organisation made up of over 50 organisations from churches, unions and peace groups, set up to lobby against subservient support by Australia to United States war initiatives. It was held this time in Darwin to give strength to the locals who question the current policy of hosting the large US military base which are so visible in this area.

Around 100 participants came from all around Australia, as well as guests from Guam and West Papua. The highlight of the conference was the 60 strong protest outside the Robertson Barracks asking the 2500 US Marines housed there to leave. Entitled ‘Give ‘em the Boot’ the idea was to present them with a mounted boot sculpture created by Nick Deane as well as some Tim Tams – a favourite apparently – but unfortunately no-one was available to receive the presents.

The line-up of speakers was impressive and built on the themes of recent years.

The ‘Welcome to Country’ was given by Ali Mills representing the Larrakia people who has been involved in the cultural life of Darwin for many years, and whose mother Kathie Mills, who took part, is a recognised poet, playwright and songwriter.

It’s difficult to summarise the entire content of such a weighty and interesting gathering,but for those who have time it is possible to watch the recordings.

The conference celebrated the success of the International Campaign to Abolish Nuclear weapons in establishing a United National Treaty signed by 122 countries, but not by Australia which puts it out of step with most of its neighbours. Dr. Sue Wareham launched their latest report entitled ‘Choose Humanity” and also brought along the Nobel Peace Prize medal for all to see (see picture).

Lisa Natividad, Indigenous Guam Chammoro representative, who had spoken at a previous IPAN conference, didn’t have much good news to report since the last time unfortunately. Guam is currently an unincorporated territory of the US though its people have no voting rights there. One third of its land area is controlled by the US Department of Defense which has brought a number of environmental and environmental problems including radiation exposure and contamination from PFAS firefighting foam, as well as excluding people from their sacred sites for traditional practices. The saddest statistic was that due to the lack of jobs for young people on the island many of them join the military with tragic results.The number of young people who die as a result of military engagement is very high, five times greater than the proportion in the US.

Jordan Steele-John, the young Green Party Senator who took over from Scott Ludlam, is an impressive speaker who is carving out a niche as the spokesman on Peace, Disarmament and Veteran Affairs, the renamed Defence portfolio. Jordan reflected on the tendency to glorify war rather than promote peace and his desire to champion conflict resolution. He spoke of the huge challenge of climate change action in the region as well as criticising the government’s dramatic reduction in spending in diplomacy which undermines relationships with other countries.

Dr. Margie Beavis from the Medical Association for the Prevention of War gave a thorough overview of how Australians are being denied full use of public funds and how the social costs for example of post-traumatic stress disorder often cause domestic violence and impact on women.

Warren Smith of Maritime Union of Australia spoke about union concerns about the projected $200 billion to be spent on material purchased for aggressive engagement by the Australian Defence Force and the increasing number of jobs lost through automation. Peace and Justice is a strong focus in the union movement in Australia.

Susan Harris Rimmer, Associate Professor from the Griffith University in Brisbane ,spoke of the importance of engaging with the political discourse on the topic of how to keep Australia safe, how an independent Australia taking a new direction in our foreign policies could benefit the people of the Pacific and build a sustainable secure and peaceful future.

Other impressive speakers were Henk Rumbewas who spoke of the rising tensions in West Papua and the failure of Australian foreign policy to address the rights of West Papuans, and

Dr. Vince Scappatura from Macquarie University on the Australia-US Alliance in the context of rising tensions with China.

On the environmental impacts we heard Robin Taubenfeld from Friends of the Earth on the extent to which preparing for and enacting war impacts on humankind’s ability to address climate change and environmental damage, Donna Jackson from the Rapid Creek community group on behalf of the Larrakia people on the contamination of Rapid Creek and other waterways in the Northern Territories, and Shar Molloy from the Darwin Environment centre on the impact of a buildup of military forces land air and sea on the local environment.

John Pilger came in on video sharing concerns on how China was perceived as a threat in the area rather than under threat, as well as how whistleblowers such as Julian Assange are unsupported, while Dr. Alison Bronowski also gave an overview on diplomatic trends.

Several very positive moves came out of the conference including the plan to establish a network of organisations, in particular those in Australia, New Zealand, Pacifica and Southeast Asian nations, aimed at sharing knowledge and standing together as advocates for agreed aims for peace, social justice and independence, opposing war and nuclear weapons.

The conference also agreed to support for a Joint Code of Conduct for the South China Sea, uphold the UN Charter and the Treaty for Amity and Cooperation in Southeast Asia, support the people of West Papua and Guam in their struggles for independence. I also agreed to endorse the ICAN campaign to ban nuclear weapons, and to acknowledge the aspiration of Indigenous people for sovereignty and self determination.

The next IPAN conference will be in two years time and I would recommend it and the organisation to anyone interested in making a difference in our region, and I look forward to how our joint network will contribute to discussion and action during these difficult and challenging times.