A protest rally and press conference are scheduled for 6:00 pm, Tuesday, May 9, 2017 at the entrance of the Intrepid Sea, Air and Space Museum Complex, Pier 86, W. 46 St. and 12 Ave., NY, NY 10036, to address the museum’s solicitation and then rejection for its new “Drones” exhibit of a display of quilts commemorating those killed by U.S. drone attacks.  The display, which has appeared across the U.S. and internationally, is organized by retired Navy Commander Leah Bolger, who served 20 years of active duty and is a former president of Veterans For Peace. 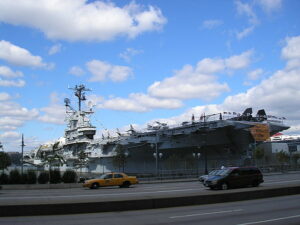 As Donald Trump escalates the U.S.’s illegal drone killing, the Intrepid Sea, Air and Space Museum has deep-sixed from its new “Drones” exhibit the display of a quilt project organized by a female Navy veteran to remember victims of U.S. drone attacks and that powerfully reveals to the public the ghastly human consequences of the U.S. drone war.

Since taking office in January, President Trump has dramatically increased drone attacks as part of a sharp expansion of the U.S. air assault on a variety of nations, including Yemen, where famine threatens 7 million people.

In the face of the Trump air onslaught, the Intrepid Museum has chosen to cancel its plans to display quilts created through retired Navy Commander Leah Bolger’s Drones Quilt Project.

Trump visited the Intrepid Museum this past Thurs., May 4 to keynote at a banquet commemorating the 75th anniversary of the World War II Battle of the Coral Sea.  In the speach he tried to repair relations with Australia, referring to “so many conflicts (wars) that we fought on and worked on together.”

Since March of 2013, over 500 people have made quilt blocks containing the names of people murdered by U.S. drones, Ms. Bolger said.   “Since we only know the names of about 20% of the victims, some blocks say ‘unidentified man,’ ‘beloved mother’, or something similar,” she continued, “so that we remember those victims too”. Currently there are 11 completed quilts, and each quilt contains 36 blocks.  A twelfth quilt will be completed soon.  The Drones Quilt Project was first exhibited at the 2013 Veterans For Peace convention in Madison, WI.  Since then the exhibit has been shown in dozens of cities in 25 states as well as The Hague.

The Intrepid Museum approached Ms. Bolger in the summer of 2016 when Eric Boehm, the museum’s curator of aviation and aircraft restoration, asked whether the quilts might be available for display in the museum’s “Drones” exhibit, which opens to VIPs on May 9 and to the general public on May 10. Mr. Boehm said that the Intrepid Museum was “…endeavoring to show both sides of the armed drone controversy as equally as possible.”  He went on to add that they felt “…that the power of the quilt project is exactly what they required to give this debate a level argument.”

“I was very excited to be contacted by Mr. Boehm,” said Ms. Bolger.  “I was so pleased to know that the Intrepid Museum knew about the Drones Quilt Project, and that they understood that the negative effects of the use of combat drones needed to be presented in their exhibit.  I asked for editorial control over information that would be displayed explaining the quilt exhibit, and Mr. Boehm agreed.”

However, in mid-March, 2017, Mr. Boehm notified Ms. Bolger that the quilts would not be displayed, after all, because there was no room for them in the museum’s drone exhibit.

“I was crushed by this rejection,” she said. “I know that the exhibit will be seen by thousands of people, and now those people may never know about the illegal and immoral use of combat drones. This was a one of a kind opportunity to expose the public to another side — one that our government will never acknowledge.  Hellfire missiles launched from combat drones are responsible for the murders of thousands of people,” she added.

“By seeking and then rejecting the quilt display, the museum leadership shows itself to be very comfortable covering up the human impact of U.S. drone attacks,” said Nick Mottern, coordinator of Knowdrones.com, also a Navy veteran and member of Veterans For Peace. “Why is the Intrepid museum so determined to shield the U.S. drone war from public scrutiny?”

The museum lists as sponsors for the “Drones” exhibit the New York Council on the Arts, as well as the American Institute of Aeronautics and Astronautics (AIAA), IEEE Foundation and DJI.

The AIAA is an aerospace lobbying body whose corporate supporters include a number of firms involved in U.S. weaponized drone systems production: Honeywell International, Lockheed Martin, Raytheon Company and the Boeing Company.   John R. Treichler, president of the IEEE Foundation board, is the president of the Raytheon Applied Signal Technology business unit. DJI is a maker of small consumer drones that also have military and police applications.