With Trump in the White House our world suddenly seems upside down, with chaotic new domestic threats issued hourly and the world shifting dangerously under our feet. Suddenly, too, in the streets across the country are thousands of fresh new faces resisting Trump’s Muslim ban and other “fascist” assaults on “American values.” I’d become caught up resisting this unprecedented dictatorial menace in a seemingly new era of revolutionary possibility.​ But then I saw the photo. 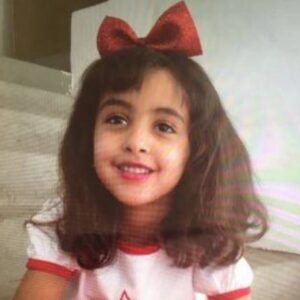 It was of a darling 8-yr old girl, among those innocents killed in a US commando raid and drone strikes last week in Yemen. The press ignored her murder, reporting instead the death in the raid of a US soldier, the first to die on Trump’s watch. But the death of that little girl is the real story. Her name was Nawar Al-Awlaki, daughter of Anwar Al-Awlaki, the first American citizen assassinated by a US drone strike, in 2011. Another drone strike two weeks later had also killed his 16 year old son Abdulrahman. Scurrilous legal rationalizations and futile lawsuits followed those assassinations.

Not so with little Nawar, dying invisibly, the third in a family of victims (coincidence?) tracing a line from one president to the next in, yes, a seamless presidential transition. Her death goes unnoticed by the thousands now in the streets protesting a thuggish overreaction to “radical Islamic extremism,” itself a reaction to the thousands of deaths like hers perpetrated relentlessly by the US in the very countries whose refugees are now banned.

Her death is a reminder that everything remains the same, that despite apparent rupture, the murderous baton has passed silently to a new American assassin, safely preserving the “normalized” violence underpinning American values.

There is one difference now. In past strikes there was at least a shameless pretense that someone was in charge, carefully deciding on each operation. But in these recent strikes the president had just been inaugurated and neither the CIA director nor Secretary of Defense were yet in office. So the killing machine was now executed by subordinates in the Pentagon or CIA with no one in charge. A killing machine on autopilot. Many antiwar activists have turned our attention to the palpable domestic threats of the Trump regime, joining in rallies far larger than any antiwar protests during the Obama years. We don’t recognize many faces among the new throngs of enthusiastic protestors, which at first I took as a hopeful sign of broadening resistance. But there’s a reason few of these protesters were at those earlier antiwar protests and why their protests now still avoid confronting the US wars and drone strikes. It’s because the killing machine at the dark heart of America remains invisible, below their radar despite renewed consciousness, and I haven’t a clue how to change that sad reality.