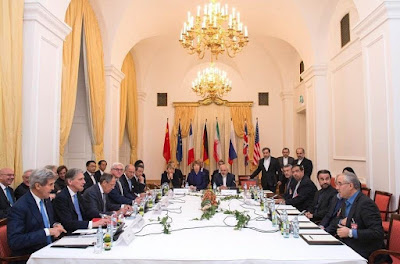 Iran has reached an agreement to significantly limit its nuclear ability for more than a decade in return for lifting international oil and financial sanctions.  The agreement is between Iran and Britain, China, France, Germany, Russia, the United States, and the European Union.  The deal would not have likely been possible without the active participation of the Russian Federation.

Israel and Saudi Arabia will likely try to kill the deal as will the Republican led Congress in Washington.

Why Iran in focus and not all those who have nuclear weapons? Why 5 nuclear weapons states at the table, all violating the Non-Proliferation Treaty – telling Iran not to have what they have?

Why focus on Iran, not Israel which has nuclear weapons, much higher relative military expenditures, a record of violence?

All good questions for sure.  I’d like to add one more question into this stew.

The US has long maintained that the Pentagon’s deployment of ‘missile defense’ (MD) systems into eastern Europe are not aimed at Russia but have been aimed at Iran’s nuclear potential.  Of course this has always been nonsense but just for a moment let’s pretend it was true.  The US was ‘protecting’ itself and Europe from a nuclear attack by Iran – even though Tehran had no nuclear weapons and no long-range delivery systems capable of hitting the US.

So now that this deal has been signed what is the need for the US to continue with its deployments of MD interceptors in Poland and Romania as well as on Navy destroyers in the Mediterranean, Black and Baltic seas?  And why the need for the Pentagon’s MD radar in Turkey?  None of these systems will be needed.  Will Washington bring MD home?

Or will the US now search for, and find, another excuse to justify their destabilizing MD interceptors near the Russian border?

Keep your eyes on that bouncing ball.